Thank you Mr. Chairman and members of the Committee for asking us to discuss with you the appropriate policy response to what has come to be widely known as the “too big to fail” (TBTF) problem. We will first outline some threshold thoughts on this question and then answer the questions that you posed in requesting this testimony.

Too Big to Fail and the Current Financial Crisis 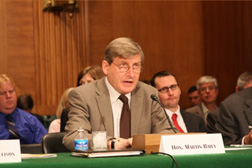 Too Big to Fail: Answering the Four Key Questions (Plus One More)