As the college class of 2011 graduates in the aftermath of the Great Recession, some graduates are struggling to find a good job—or any job at all. As a result, many are questioning whether the time and expense of college was worth it. We try to answer this question by comparing the economic benefits of a college degree to its costs, as one would for any other investment. When compared to other types of investments, how does a college degree really stack up?

The answer is clear: Higher education is a much better investment than almost any other alternative, even for the “Class of the Great Recession” (young adults ages 23-24).  In today’s tough labor market, a college degree dramatically boosts the odds of finding a job and making more money.

On average, the benefits of a four-year college degree are equivalent to an investment that returns 15.2 percent per year. This is more than double the average return to stock market investments since 1950, and more than five times the returns to corporate bonds, gold, long-term government bonds, or home ownership. From any investment perspective, college is a great deal.

The Value of A College Degree

As we are all aware, a college degree is a significant investment involving up-front costs of money and time. First, there are the financial outlays: the cost of tuition and fees (but not room and board—you need to eat and sleep whether or not you go to college). The total average cost of a four-year college degree (public and private) is roughly $48,000, and a two-year associate’s degree costs about $5,200.1

An additional cost of college is the foregone earnings or “opportunity cost” of not working. On average, 18 and 19 year olds right out of high school earn about $11,600 per year, while 20 and 21 year olds with a high school degree average about $15,400 per year (this average reflects the fact that high school workers are less likely to find a full-time job and more likely to be unemployed).

When you add up the various costs of college, the total investment for a four-year college degree is about $102,000; for a two-year associate’s degree, it’s about $28,000.

These significant costs lead to the question, “Is college worth it?” Put another way, would an 18 year old be better served by investing in college or putting that money into the stock market or with some other type of investment?


To answer this question, imagine that you sit down your 18 year old daughter and offer her $102,000 to either pay for college or to invest elsewhere. If she chooses to invest in college, she will have the job opportunities and earnings of a college graduate for the remainder of her working years (until she is 65). If she chooses the latter, she’ll face the job prospects and earning power of a high school graduate.

These two paths are starkly different, as shown in the following chart. At age 22, the average college graduate earns about 70 percent more than the average person with a high school degree only. But that is only the beginning. For instance, in 2010, a college graduate at age 50 (the peak of her career) earns approximately $46,500 more than someone with only a high school diploma. 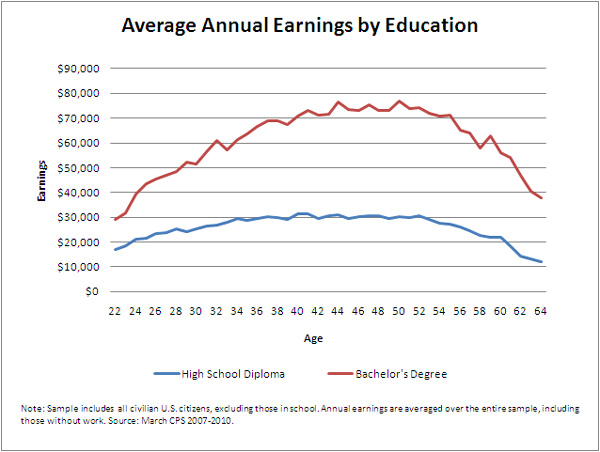 It’s clear that college graduates fare better than their peers with a high school degree only. But from an investment perspective are these higher earnings worth the up-front cost of $102,000?

We answer this question by calculating the rate of return to college compared to other investments, shown in the figure below. The $102,000 investment in a four-year college yields a rate of return of 15.2 percent per year—more than double the average return over the last 60 years experienced in the stock market (6.8 percent), and more than five times the return to investments in corporate bonds (2.9 percent), gold (2.3 percent), long-term government bonds (2.2 percent), or housing (0.4 percent).2 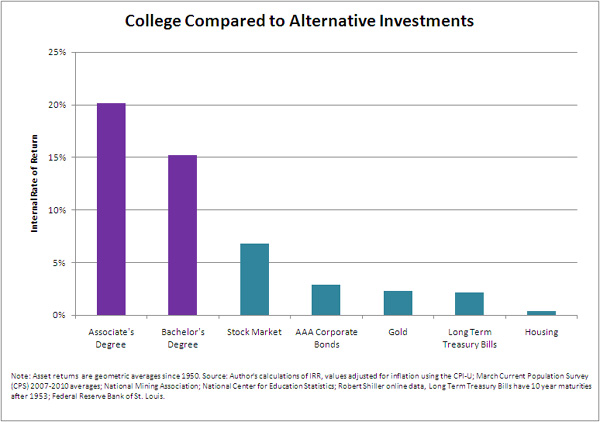 At first blush, the value of the associate’s degree really stands out because it provides a higher percentage return of over 20 percent. However, this impressive return mostly reflects the much lower cost of an associate’s degree relative to a four-year degree rather than a boost to long-run earnings. When compared to the lifetime earnings of four-year college graduates, workers with an associate’s degree still earn a good deal less. Thus, the rate of return does not tell the full story.

Another way to view the total dollar benefit of a four-year college degree is to compare the cumulative lifetime earnings of workers based on their educational attainment—as shown in the graph below. Through this lens, a bachelor’s degree clearly provides the largest boost to earnings. 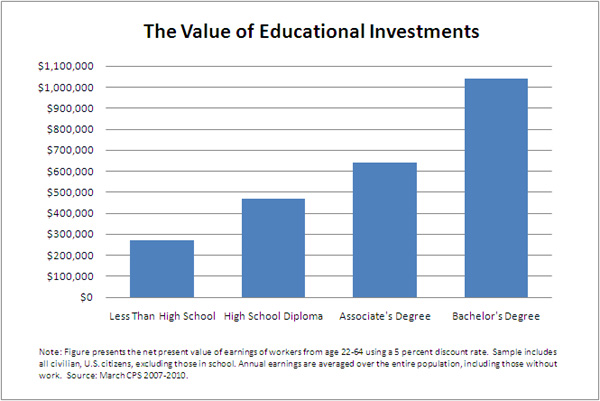 There are many factors that play a role in a worker’s lifetime earnings. This analysis focuses on the average earnings of a college graduate compared to the average person with only a high-school diploma. But we all know that each person is different, and it’s possible (and even likely) that individual college graduates have different aptitudes and ambitions, and might even have access to different levels of family resources. All of these factors can impact earnings. However, the evidence suggests that these factors don’t drive the impressive return to college; instead the increased earning power of college graduates appears to be caused by their educational investments (Kane and Rouse 1995, Card 1995, 2001).

In addition, our analysis focuses specifically on the benefits of completing a college degree. Unfortunately, many people start college and don’t finish, resulting in educational costs but not leading to a degree. However, evidence suggests that those who attend college, even if it’s only for a year, earn more than those who don’t start college at all. Depending on how the costs and benefits shake out (the data on this is hard to come by) this could reduce the return to starting college.

There are other reasons why our analysis may underestimate the value of attending college.  First, these returns are not risk-adjusted—there is both the risk that wages could fall or jobs could be hard to find, just as those who invest in the stock market face the risk of declines in market value. These risks tend to be much higher for less-educated workers. Similarly, in addition to reducing job-related risk, college has many indirect benefits that aren’t captured in our calculation. For example, college graduates are healthier and live longer than high school graduates; studies also find that college graduates have higher job satisfaction than people with lower levels of education (Grossman 2006; Oreopoulos and Salvanes, 2009). Furthermore, many people find college an enjoyable and life-changing experience.

Much of the debate over the value of a college degree focuses on the here and now—what opportunities are available to recent graduates during our nation’s economic recovery. It’s worth taking a step back, however, and focusing on the long-term impacts of a college investment.

Indeed, the recession has not fundamentally changed the math: although a college degree has upfront costs, it important to remember that it is an investment that pays off over time. The evidence clearly shows more education improves your chances in the labor market, in both good times and bad. Yet over the last forty years, increases in college attainment have slowed considerably, especially for men. Given these results, the real mystery may be why more people aren’t going to college or getting a two-year degree.

Warren Buffett recently told Columbia Business school students, “Right now, I would pay $100,000 for 10 percent of the future earnings of any of you.” (Tucker, 2009). He is not a legendary value investor for nothing: When compared to other investment options, a college degree stands out as one of the best investments one can make.


[1] Source: NCES
[2] The rate of return is estimated as an “internal rate of return or IRR.” Estimates by Heckman, Lochner and Todd based on 2000 census data found the IRR to a college degree to be 14 percent for whites and even higher (18 percent) for blacks. See James Heckman, Lance Lochner and Petra Todd, “Earnings Functions and Rates of Return,” NBER working Paper #13780, 2008.

[3] Similar analysis by Barrow and Rouse using 2003 data found the earnings boost from a college degree to be between $412,984 to $469,835 in $2009, depending on assumptions.  The benefit to a college degree appears to have increased since then, in part because of the differential impact of the recession on high school educated workers. See Lisa Barrow and Cecilia Rouse, “Does College Still Pay?” Volume 2, Issue 4, 2005.