Throughout the nation, elected leaders and voters alike increasingly understand that some level of public investment will be necessary in order to set their economies on the path to widely shared prosperity. However, conventional budgetary processes are in many instances failing to address the critical economic challenges confronting American communities. As a result, states and metro areas are increasingly seeking other ways to finance large-scale, economy-shaping efforts.

Ballot measures represent one possible tool that leaders can use to secure funds for critical investments in economic growth amid diminished federal support and continued fiscal challenges at the state and local levels. Initially conceived as a check on corporate interests and a way to effect reform, legislative referendums and citizen-initiated measures today can offer an alternative vehicle when further investment is needed and cannot be obtained through traditional channels.

A rebalancing of power dynamics is underway throughout the United States. At the federal level, profound dysfunction—epitomized by ongoing budget battles, debt ceiling stalemates, and the recent 16-day federal government shutdown—has become the new normal. As Washington lurches from one crisis to the next, leaders in states and metropolitan areas are working to establish a more resilient economic growth model that prizes exports and global engagement, advanced energy and lowcarbon solutions, innovation and expanded opportunity. As Bruce Katz and Jennifer Bradley have argued, a “metropolitan revolution” is afoot, with “cities and metros… driving the conversation, making transformative investments in the public goods that undergird private investment and growth.” 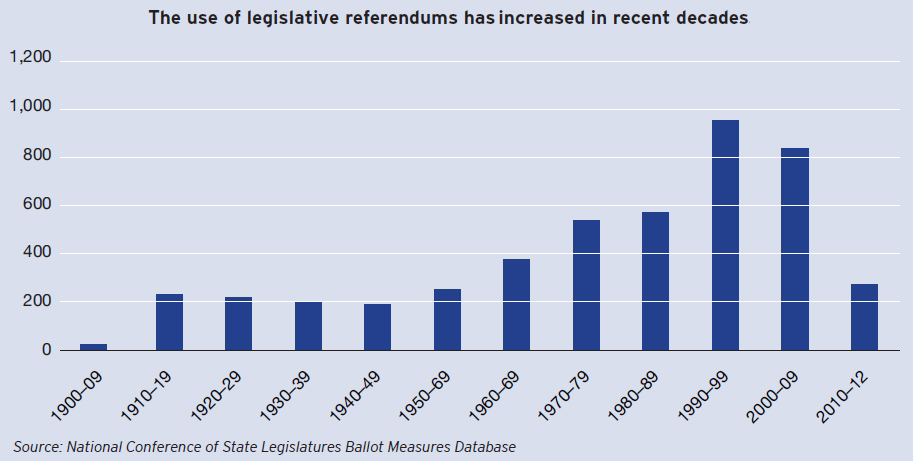 However, there is a problem: As state and metro leaders take action to reshape their economies, they are increasingly finding conventional budgetary processes ill-suited to the task of addressing the critical economic challenges confronting American communities. In decades past, states and metro areas could rely on the federal government to provide funds for the types of investment needed to catalyze economic growth. For instance, in the years following the end of World War II, federal investment in high-tech research and development, education and skills training, and transportation infrastructure, inspired in large part by the geopolitical imperatives of the Cold War, set the nation on a path to global economic dominance in the latter half of the 20th century.

Today, by contrast, the federal role in providing such funds is steadily declining. With the Budget Control Act of 2011 placing downward pressure on discretionary spending through 2021, federal funding for investment in such critical economic drivers as infrastructure, education, and basic research is projected to decline to its lowest levels in at least a decade. Meanwhile, demographic trends such as the aging and retirement of the baby boom generation as well as rising health care costs require a shift in federal spending priorities in order to meet the growing financial obligations of the Social Security, Medicare, and Medicaid programs.

States and localities, meanwhile, are contending with their own budget challenges. Though tax revenues have begun to rebound from their Great Recession nadirs, economic uncertainty persists and a cautious attitude prevails in many state capitals and city halls.3 In addition, underfunded pension liabilities at the state and municipal levels raise questions about the public sector’s ability to make good on commitments to pensioners and bondholders alike.4 Faced with diminished federal support and continued fiscal constraint at the subnational level, states and metro areas are now seeking other ways to finance large-scale, economy-shaping efforts.

This search for alternative approaches has led some leaders to look to ballot measures, a longstanding mechanism for effecting change, as a potential solution. Rooted in a tradition of American popular self-help, legislative referendums and citizen-initiated measures can give voters the opportunity to determine how the government should respond to the pressing issues of the day. By appealing to voters directly to secure funds for needed investments in innovation, education, and infrastructure, some state and metro leaders are working to address the challenges facing their area economies. The measures passed in November 2012 alone highlight public support for forward-thinking interventions designed to bolster area economies. From closing business tax loopholes in order to fund clean energy projects to investing in prekindergarten programs, postsecondary educational facilities, and transit infrastructure, voters have proven their willingness to invest tax dollars in ways that strengthen the economy and foster more widely shared prosperity.

Looking forward, ballot measures will likely continue to play an important role as a vehicle for public investments in a broad range of economically critical areas. As leaders in states and metropolitan areas formulate new post-recession economic development strategies, they would do well to explore how initiatives and referendums have been used in the recent past to fund public investment in economic growth. By learning from these earlier efforts and carefully weighing ballot-driven financing mechanisms against other available modes of public finance, states and metro areas will be well positioned to identify the approach best suited to their goals.