Tell us why you think Africa matters to the U.S. Join the conversation on Twitter using #AfricaMatters. 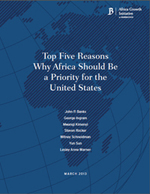 For over a decade now, the continent of Africa, especially sub-Saharan Africa, has undergone a major transformation. In 2000, The Economist referred to Africa as the “Hopeless Continent.” This nickname was based on an evaluation of the many disadvantages that characterized the continent: poverty and disease, cycles of conflict, military and dictatorial one-party states, etc. Despite large endowments of natural resources, the continent’s economic performance was dismal as a result of poor macroeconomic management and a hostile environment for doing business.

In 2011, The Economist  referred to Africa as the “Rising Continent” and a March 2013 issue of the magazine contained a special report referring to Africa as the “Hopeful Continent.” These days, Africa is variously referred to in positive terms such as emerging, rising and hopeful. This positive view of Africa is justified—sub-Saharan Africa is the host of some of the fastest growing economies in the world. This growth is not just due to rising commodity prices but is also driven by a more vibrant private sector supported by an improved business climate. There have also been dramatic improvements in governance and economic management. The region has seen major improvements in various sectors of the economy, especially in services. The information technology revolution has become an important aspect of the new Africa, particularly in terms of mobile technologies. As a result of these developments, Africa’s middle class is now growing rapidly, and the continent has become a major market for consumer goods. While sub-Saharan Africa still faces many development challenges, it is a far cry from the one described by The Economist in 2000. Africa is indeed on the path to claiming the 21st century.

You’re taking the DFC down a slippery slope of being a national security agency instead of a development agency.