A pair of recent reports from the Economic Policy Institute (EPI) on Rhode Island’s reforms to its retirement plans for public employees reminded me of a satirical news article on lobbying efforts by religious fundamentalists to overturn the second law of thermodynamics.  The title of one of the reports, “Rhode Island’s New Hybrid Pension Plan Will Cost the State More While Reducing Retiree Benefits,” seemed to suggest that the report’s author had managed to repeal the laws of arithmetic.  What sort of deliberate change to a retirement system could lead to more money going in and less money going out?

The answer is that the reports, one by Demos’s Robert Hiltonsmith and the other by EPI’s Monique Morrissey, offer some useful background information on pension reform in Rhode Island, but fail to provide sufficient evidence to support this striking conclusion.  A careful analysis of the effects of a particular pension reform on benefits provided to public employees and costs incurred by taxpayers would entail detailed calculations under a range of possible assumptions. The level of benefits and their costs to taxpayers depend on many factors, including when employees retire, how long they worked, how long they live after retirement, and the investment returns on pension funds.

On the benefits side, a serious analysis would estimate the pension wealth of employees, based on how long they work for the state, before and after the policy change. Hiltonsmith misses the mark by simply providing estimates of yearly retirement income for an employee who spends her entire 30-year career working for the state of Rhode Island. This is the headline finding, but Hiltonsmith acknowledges that 30-year veterans are far from typical, noting that they receive annual pension benefits more than twice as large as the average state employee. Likewise, Morrissey’s report indicates that “the hybrid plan may provide more valuable benefits to some workers, including some mid-career job leavers.”

A comprehensive analysis would also address the tradeoffs between benefit cuts to full-career workers and benefit increases to employees who split their careers between different jobs.  Hiltonsmith and Morrissey give us no basis for making such comparisons, choosing instead to highlight the cuts while barely mentioning the potential gains. This is important because there is significant research indicating that many traditional defined-benefit pension systems redistribute large amounts of pension wealth away from mobile employees who split their careers between the public and private sectors (or the same sector across multiple states) in order to finance more generous benefits for those who spend their entire career in the same sector in the same state.

The figure below shows the accumulation of pension wealth over an employee’s career in Missouri under the existing defined-benefit (DB) plan and under a hypothetical reform called cash balance, which rewards employees with roughly the same retirement benefit for each year of service rather than in fits and starts.  It would be misleading to trumpet the benefit cut to the long-serving group as a travesty while ignoring the fact that it would enable the state government to increase the benefits to those who serve the public for “only” 20 years.  It is not enough to simply calculate the cuts to the benefits of those who benefited most from the old plan—they must be placed in the context of those who gain as a result. 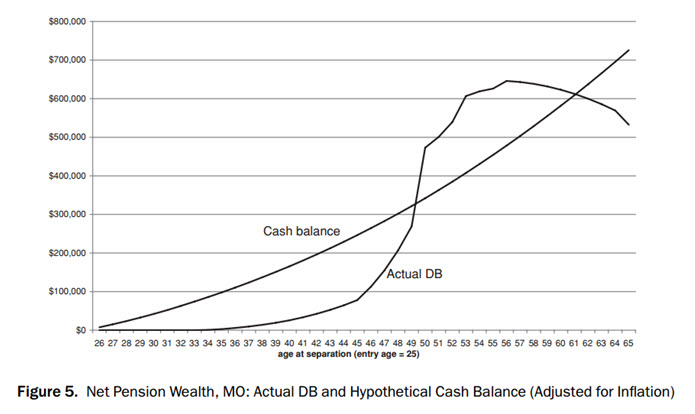 Source: Robert Costrell and Michael Podgursky. (2010). “Distribution of Benefits in Teacher Retirement Systems and Their Implications for Mobility.” Education Finance and Policy 5(5): 519-557.

On the cost side, what is needed is a careful side-by-side comparison of estimated costs under the new and old plans under various plausible assumptions. Hiltonsmith’s headline finding that Rhode Island’s new plan will cost the state more is based only on a cursory citation of the state’s actuarial calculations. As my colleagues and I discuss in a recent Brown Center report, states seriously underestimate the underfunding of their defined-benefit pension systems due to overly optimistic assumptions about the rate of return they will earn on their pension funds.  Rhode Island reduced its assumed return to 7.5 percent in 2010, which is more conservative than other states, but still likely to understate the costs of the traditional pension system given that promised benefits must be paid regardless of economic performance.

The question of how much Rhode Island’s pension reforms saved taxpayers by moving to a hybrid system (and putting in place other policy changes) is an important one.  Analyzing a reform that includes a defined contribution component (where benefits depend on market returns) involves an added complication in that it shifts risk from the government to the employee. Such a move exposes the government to less risk, and thus reduces the cost to taxpayers (using fair-value accounting practices that take into account the relative risk imposed on taxpayers by different policies). But it also decreases the value of the benefits received by risk-averse employees, which needs to be taken into account when evaluating the effect of the policy change on benefits.

Calculating the effects of reforms to pension systems is time-consuming and yawn-inducing, even for many of those who are fascinated by the topic.  It is complicated by the faulty assumptions built into existing actuarial practices by state governments, but it is crucial work if states are to properly fund their pension systems and eliminate the perverse incentives that undermine the recruitment and retention of talented public servants. Rhode Island is among the few states that have enacted sweeping pension reforms. Accurate, comprehensive information about the effects of those changes is vital both locally and to other states deciding which changes to make to their own retirement systems.