There have long been debates about the sustainability of the transatlantic alliance and accusations amongst allies of unequal contributions to burden-sharing. But since countries on both sides of the Atlantic have begun introducing new – and often major – military spending cuts in response to the economic crisis, concerns about the future of transatlantic defense cooperation have become more pronounced. 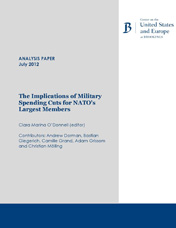 A growing number of senior officials are now publicly questioning the future of NATO. In June 2011, in the midst of NATO’s operation in Libya, Robert Gates, then US Defense Secretary, stated that Europe faced the prospect of “collective military irrelevance” and that unless the continent stemmed the deterioration of its armed forces, NATO faced a “dim, if not dismal future”. Ivo Daalder, the US Permanent Representative to NATO, and James Stavridis, NATO’s Supreme Allied Commander Europe, have argued that “if defense spending continues to decline, NATO may not be able to replicate its success in Libya in another decade”. The alliance’s Secretary General, Anders Fogh Rasmussen, has warned that “if European defense spending cuts continue, Europe’s ability to be a stabilizing force even in its neighborhood will rapidly disappear”. While Norwegian Defense Minister Espen Barth Eide has claimed that “exercises have shown that NATO’s ability to conduct conventional military operations has markedly declined. […] Not only is NATO’s ability to defend its member states questionable, it might actually deteriorate further as financial pressures in Europe and the US force cuts in military spending”.

In order to explore the validity of these claims, this report outlines trends in military spending across the EU since the onset of the economic crisis. It then analyzes the fallout of the downturn for the armed forces of NATO’s largest defense spenders – France, Germany, the United Kingdom and the United States.