Class-size reduction, or CSR, is enormously popular with parents, teachers, and the public in general. The latest poll results indicate that 77 percent of Americans think that additional educational dollars should be spent on smaller classes rather than higher teacher salaries. Many parents believe that their children will benefit from more individualized attention in a smaller class and many teachers find smaller classes easier to manage. The pupil-teacher ratio is an easy statistic for the public to monitor as a measure of educational quality, especially before test-score data became widely available in the last decade.

Policymakers across the nation, including those in at least 24 states, have taken these ideas to heart and enacted CSR initiatives at costs upward of billions of dollars. California allocated $1.5 billion per year in the late 1990s to reduce class size in the early grades. Florida has spent about $20 billion since 2002 reducing class size in every grade from kindergarten through high school. The federal government also has its own program, which provided $1.2 billion to $1.6 billion per year from 1999 to 2001 for CSR in grades K–3. This program was absorbed into Title II of the No Child Left Behind Act in 2001.

These policies, coupled with trends in local school districts, have produced a widespread reduction in the number of students per teacher over the past four decades. Figure 1 shows that the pupil-teacher ratio in public schools has fallen by about 30 percent since 1970. This trend partly reflects an increase in educational services to students with disabilities, as required by federal law beginning in 1975. But falling pupil-teacher ratios affected all students, as evidenced by the even steeper drop at private schools (which serve fewer disabled students). The trend at private schools also likely reflects the strong preference of parents for small classes and the greater incentive for private schools to respond to those preferences.

Parents, teachers, and policymakers have all embraced CSR as a strategy to improve the quality of public education. There is surprisingly little high-quality research, however, on the effects of class size on student achievement in the United States. The credible evidence that does exist is not consistent, and there are many low-quality studies with results all over the map. The most encouraging results for CSR come from a single experiment conducted in the 1980s, which found that a large reduction in class size in the early grades increased test scores, particularly among low-income and African-American students. But evaluations of large-scale CSR policies in California and Florida have yielded much less positive results, perhaps because of the need to hire so many (inexperienced and potentially less effective) new teachers. 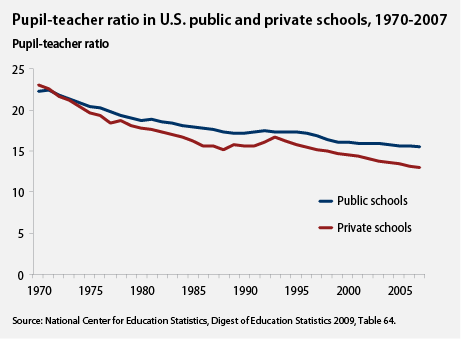 The evidence on class size indicates that smaller classes can, in some circumstances, improve student achievement if implemented in a focused way. But CSR policies generally take exactly the opposite approach by pursuing across-the-board reductions in class size at the state or federal level. These large-scale, untargeted policies are also extremely expensive and represent wasted opportunities to make smarter educational investments.

Large-scale CSR policies clearly fail any cost-benefit test because they entail steep costs and produce benefits that are modest at best. But what about reductions in class size at the district or school level? When school finances are limited (as they always are), the cost-benefit test any educational policy must pass is not “Does this policy have any positive effect?” but rather “Is this policy the most productive use of these educational dollars?” Assuming even the largest class-size effects in the research literature, such as the STAR results that indicate that a 32 percent reduction in class size increased achievement by about 15 percent of a year of learning after one year, CSR will still fail this test because it is so expensive. Reducing class size by one-third, from 24 to 16 students, requires hiring 50 percent more teachers. Depending on how much extra space schools have, new facilities may need to be built to accommodate the additional classes.

There are certainly many policies that might be proposed as cost-effective alternatives to CSR, but one set of policies that stand out are those aimed at improving teacher quality. Researchers agree that teacher quality is the single most important in-school determinant of how much students learn. Stanford economist Eric Hanushek has estimated that replacing the worst 5 percent to 8 percent of teachers with average teachers would dramatically boost achievement in the United States. Investing less in CSR would free up resources that could be used to recruit and retain highly effective teachers. For example, schools might “treat different teachers differently,” or pay teachers differently based on their effectiveness in the classroom or the subject area they teach, as Robin Chait and Raegen Miller have suggested.

The fact that across-the-board CSR policies at the state or district level are not cost-effective does not mean that smaller classes should never be used, but rather that they should be reserved for use in special cases by individual schools. A principal may decide, for example, that a smaller class makes sense for an inexperienced teacher who needs support in developing skills to provide accommodations for students with disabilities. At the same time, the principal may want to assign a larger class to a highly effective veteran teacher, perhaps with some extra compensation for the additional work required. School districts should encourage this kind of creative management and enable it by collecting and providing to principals detailed data on their teachers and the classes they teach.

This material [article] was published by the Center for American Progress

Disciplinary referrals, teachers, and the sources of racial disciplinary disproportionalities