Earlier this year, I coauthored a report that questioned the national dialogue about a pending student loan crisis.  This report revealed evidence that ran counter to the notion that the majority of borrowers with student loan debt were struggling financially, or that the condition of borrowers has been deteriorating over time.  Our analysis showed that onerous debt burdens were less common than many imagined, with only seven percent of young borrowers holding balances in excess of $50,000.  We also found that the widely publicized increases in borrowing seen over the past two decades were accompanied, for the most part, by increases in earnings, despite stagnant growth in wages in the broader economy.

Many observers criticized our work, suggesting that the conclusions belittled the very real challenges that many borrowers are facing.  But these borrowers are precisely the reason we need to move beyond the broad notion of a crisis in our system of student loans in order to focus on developing solutions to the real problems.  Focusing on a broad crisis when none exists has produced policy proposals that miss the mark in terms of providing relief where it is actually needed.[1]  Understanding the reality of student lending will allow policy makers to work on addressing the real problems in student lending instead of using excessively blunt tools to tackle the elusive “student loan crisis.”  A report that I released earlier this week, with co-author Matthew Chingos, reveals such a problem.

Our new report, “Are College Students Borrowing Blindly?,” reveals surprising new evidence that college students have little awareness of their financial circumstances.[2]  Our analysis is based on survey data from a selective four-year public university as well as data from the most recent (2011-12) National Postsecondary Student Aid Study (NPSAS), which is based on survey and administrative data for a nationally representative sample of college students.

We find that college students are largely unaware of the price they are paying for matriculation, the debt that they are taking on to finance their degrees, and, in some cases, the fact that they are borrowing at all.  We find that only a bare majority of respondents (52 percent) at a selective public university were able to correctly identify (within a $5,000 range) what they paid for their first year of college. The remaining students underestimate (25 percent), overestimate (17 percent), or say they don’t know (seven percent).  Using nationally representative data, we find similar results.  Half of all first-year students in the U.S. seriously underestimate how much student debt they have, and less than one-third provide an accurate estimate within a reasonable margin of error.  The remaining quarter of students overestimate their level of federal debt.  Lastly, we find that among students with federal loans, 28 percent reported having no federal debt and 14 percent said they didn’t have any student debt at all. 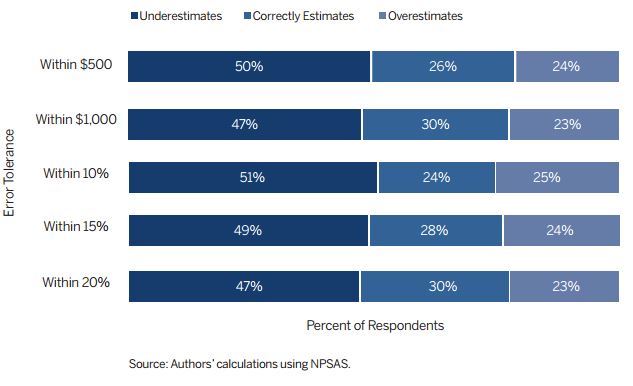 Our research cannot explain why so many students are unaware of their financial circumstances.  There are many potential explanations, some more concerning than others.  One possibility is that young people simply don’t have the level of financial savvy that would be necessary to comprehend the trade-offs involved with higher education.  For instance, many college students, especially those who enroll immediately following high school, have never had the experience of managing household finances, making it difficult for them to appropriately process and retain information about price and debt.  Alternatively, some students may lack awareness because their parents are the ones managing these decisions.  This could include both parents prompting students to take out loans that the parents plan to assume responsibility for repaying, as well as parents who advise students about where to go to college and how much debt to incur, with the expectation that the student will eventually repay the debt.  Regardless of the reason, this lack of literacy regarding the financial trade-offs of higher education should be concerning for students, parents, university administrators, and policymakers alike.

There are three potential consequences of misinformation about price and debt.  The most obvious is that students may make expensive mistakes that they will later come to regret.  Broadly speaking, students without this information will be unable to decide whether a degree program they are pursuing is worth the investment.  Unfortunately, the realization of mistakes of this nature may not come until it is too late and students are stuck with the bill.  Income based repayment and loan forgiveness programs provide relief to borrowers who face dire circumstances, but there is likely a broader population of borrowers whose regret is driven by factors other than financial distress.  For instance, students who borrow large sums to pay for professional degrees may feel stuck in career paths they don’t enjoy because they would be unable to comfortably repay their debt if they were to pursue a different path.

The second unfortunate consequence of misinformation about debt in particular is the unpleasant surprise that occurs when borrowers ultimately realize the financial burden that they have accumulated.  Our findings that many students underestimate their borrowing suggest that many borrowers are unpleasantly surprised when they learn that the financial burden of student loan debt is greater than they had imagined.  This has undoubtedly contributed to the sense of victimization expressed by many student loan borrowers in the popular press.  Whether the investment paid off in the end (financially or otherwise), the experience of being unpleasantly surprised by the reality of your financial circumstances is likely to have an impact on your behavior regarding employment and consumption, and attitudes toward debt.  The frequency of this experience and the resulting dialogue may be sending the wrong message to prospective students about the value of debt as a tool for accessing higher education.

The final, and perhaps most concerning, consequence of misinformation is its likely effect on prices.  The U.S. system of higher education functions as a market with minimal regulation over price and oversight of quality.  In order for a system like that to produce good outcomes, it is necessary that consumers (students) police the market.  In order for price to remain in line with value, students must be sensitive to both price and quality and choose institutions accordingly.  If students are unable to adequately judge quality and are insensitive to or unaware of price, then the mechanism that ensures good value will fail to function, resulting in symptoms like tuition inflation and the continued presence of institutions that do not provide value.  In this light, students’ misinformation about price should be of tremendous concern to policymakers.

The student loan market may not be headed for a crisis, but it is certainly facing some real challenges.  It’s time to move on from seeking solutions to the elusive student loan crisis and start crafting solutions to the real problems , like misinformation, that borrowers are facing today.  Rather than focusing efforts on providing financial relief based on the notion that hardship is widespread among borrowers, this evidence tells us that we need to take steps to develop a culture of informed and critical decision making in higher education.

[2] The only prior study of this question, to our knowledge, linked survey and administrative data on student debt from a large public university and found that many students underestimate how much they owe.  See Andruska, Emily A., Jeanne M. Hogarth, Cynthia Needles Fletcher, Gregory R. Forbes, and Darin R. Wohlgemuth. (2014). “Do You Know What You Owe? Students’ Understanding of Their Student Loans,” Journal of Student Financial Aid, Vol. 44: Iss. 2, Article 3.

Paul T. Hill and Kate Destler
Friday, May 13, 2022
Get daily updates from Brookings