The start of a school year brings with it a crop of anxious parents hoping their child has an excellent teacher. And recently, policymakers have wondered whether the playing field is level when it comes to getting that excellent teacher. Education Secretary Arne Duncan wrote in July that “family income and race still too often predict how likely a child is to attend a school staffed by great educators.” Beginning in April 2015, states will need to submit plans to the Department of Education to ensure that “poor and minority children are not taught at higher rates than other children by inexperienced, unqualified, or out-of-field teachers.

On the surface, this is a reasonable response to the issue of inequity in access to quality teachers. But how large of a problem is teacher inequity really? Looking at recent research on teacher equity suggests two conclusions. If equity is defined as access to teachers with particular characteristics such as experience, the problem seems large. But if equity is defined as access to effective teachers, those that contribute more to test score growth, the problem does not seem large. Which is not to say issues of teacher equity should be ignored, but that proposed solutions should be proportional to the problem.

One proxy for effectiveness is experience, as the Department of Education’s statement notes. What kinds of students are taught by inexperienced teachers? The civil rights office at the department reported that first-year teachers are 50 percent more likely to be teaching in schools with the highest minority enrollments than in schools with the lowest.

Minority enrollment is not as accurate a predictor of achievement as disadvantage, however. With Ellie Klein’s assistance, I looked at the relationship between teacher experience and disadvantage from the 2011 Schools and Staffing Survey, a nationally representative survey of teachers conducted by the National Center for Education Statistics. These data show that a bit more than 50 percent of inexperienced teachers (those with less than four years of experience) are teaching in high-poverty schools. In contrast, 19 percent of inexperienced teachers are teaching in affluent schools.

That’s a big difference. An inexperienced teacher is nearly three times more likely to be in a high-poverty school than in an affluent school. And the inequity appears to be getting more pronounced. In 1999, according to the same SASS data source, about a third of inexperienced teachers were teaching in high-poverty schools and about a third were teaching in affluent schools.

To get a sense of the magnitude of teacher inequity viewed through the lens of effectiveness, we need to measure effectiveness in some way. Suppose we measure it as “value-added,” using a statistical model to attribute to teachers an amount of test-score growth shown by their students during the year. If two teachers had similar students at the start of a school year, the one whose students have higher test scores in the spring will have higher value-added. There is lots of debate about these models, but they are appealing as a uniform approach for measuring the vague concept of teacher quality. (As an aside, calls to reduce the frequency of testing, such as here and comments by President Clinton here, work against designing and assessing education policies to raise achievement. Not having annual testing means student growth can no longer be measured, which means forgoing efforts to assess effects of policies to spur student growth.)

The Institute of Education Sciences funded three studies of the teacher-quality issue, using value-added models and measures of student and school poverty. The studies included thousands of teachers and tens of thousands of students in a wide range of states and districts. Because value-added measures rely on annual test scores, the studies report results for teachers from fourth to eighth grades, the grades for which annual tests are required. Results from two studies are discussed here and the third study had consistent findings.

Another study focused on the match between disadvantaged students (not schools) and effective teachers. It showed that the “effectiveness gap” is small. The overall score gap between disadvantaged and advantaged students was 28 percentile points in reading. That’s a big gap. The study showed that distributing students equitably among teachers would reduce this gap to 26 percentile points (in math, the study estimated that a 26 percentile-point gap would be reduced to 24 points). A closer look found that differences were larger in some districts and near zero in others.

Using this evidence, an ideal policy guaranteeing students equitable access to effective teachers could reduce a small amount of the achievement gap (about seven percent of it, the 2-point reduction divided by the 28-point base). The figure below shows the current score gap for elementary schools (in blue) and the calculated score gap (in red) with teacher equity. The difference between the columns is the ‘effect’ of reaching full teacher equity. The effect might be larger in some districts, and might have a greater impact in middle schools. And that’s the ideal policy. The actual effect would likely be smaller. The effect also relates only to narrowing the gap. It’s hard to predict what will happen to overall achievement. It could go up or down. 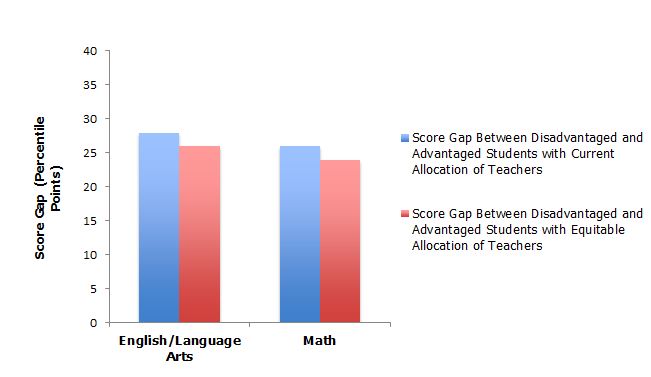 And here the policy hits a huge roadblock. Most districts have collective-bargaining contracts that give experienced teachers “seniority preference” for posted positions within the district. Teachers can use this preference to get positions in more affluent schools, which is rational considering that most districts have “single salary” schedules that pay teachers the same no matter where they teach. Some of these agreements allow districts to move teachers to schools where districts believe they are needed, but whether districts would exercise this flexibility on a scale that would reduce inequities is unclear. And eliminating seniority preferences in the contracts would presumably come at a cost to districts, unless unions are willing to accept nothing in return.

Are there other and possibly less burdensome policies that could reduce the gap? Several come to mind. High-poverty schools could be provided with additional resources—say, the funds to pay $5,000 a year more to hire the most promising candidates from teacher-preparation programs in the first place. Or these schools could be given additional resources to attract high-performing teachers, which another IES study showed led to score gains. Or teachers could be paid more if their value-added reaches some target level, and more on top of that if many of their students are disadvantaged, which might raise the overall achievement level and close gaps at the same time. The DC public schools system currently pays bonuses to teachers using a structure like this.

Secretary Duncan
wrote
that “Our continued collective failure to ensure that all students have access to great teachers and school leaders is squarely at odds with the commitment we all share to equal educational opportunity.” The evidence suggests that simply moving teachers around is not likely to do much to address this failure, if it can even be done, and that instead we should be thinking more about policies to enhance skills of teachers and leaders.