On Thursday, December 1, Shibley Telhami, Anwar Sadat Professor for Peace and Development at the University of Maryland and nonresident senior fellow at the Saban Center for Middle East Policy at Brookings, released the 2011 Public Opinion Poll of Jewish and Arab Citizens of Israel, produced in conjunction with Zogby International.

The poll surveyed 1,010 people in living in Israel in November 2011, assessing prospects for Arab-Israeli peace, attitudes toward the United States and the Obama administration, the impact of the Arab awakening, and opinions on where the Middle East is headed politically.

Get audio, video and a transcript from the launch event » 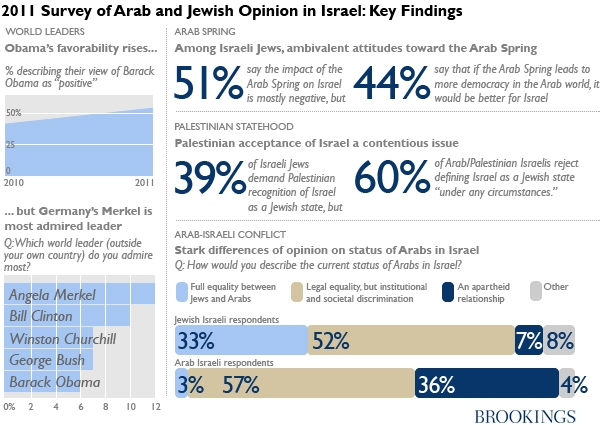 Attitudes toward the United States

The US military’s export of “unhealthy norms” to Tunisia

How much popular support does Tunisia’s president really have?

Muqtada al-Sadr’s problematic victory and the future of Iraq