On Monday, November 21, Shibley Telhami, Anwar Sadat Professor for Peace and Development at the University of Maryland and nonresident senior fellow at the Saban Center for Middle East Policy at Brookings, released the 2011 Arab Public Opinion Poll, which is produced each year in conjunction with Zogby International.

This year’s poll surveyed 3,000 people in Egypt, Morocco, Jordan, Lebanon, and the United Arab Emirates in October 2011, assessing attitudes toward the United States and the Obama administration, prospects for Arab-Israeli peace, the impact of the Arab awakening, the outlook for the Egyptian elections, and opinions on where the region is headed politically.

Get audio, video and a transcript from the launch event » 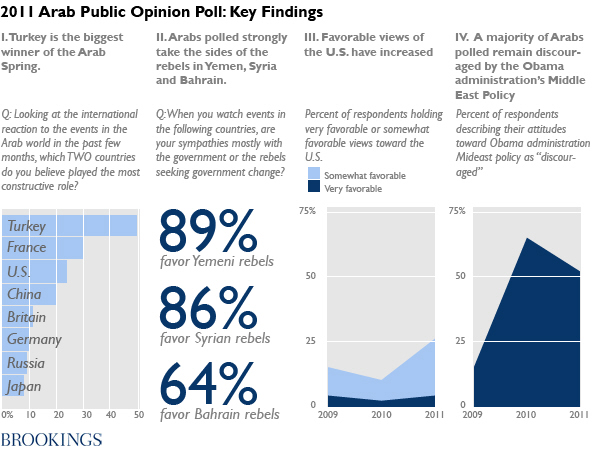 Note that these polls measure trends but not necessarily likely voting behavior. There is little information on the central issue of likely voters and little precedence. At the local level, Egyptians vote often on the basis of family/clan loyalty, personality, or other factors that trump ideology.