After years of struggling to get inflation up to their publicly-announced targets, several episodes of short-term interest rates hitting the effective lower bound, and substantial evidence that the long-term equilibrium rate of interest (the one that is expected to prevail when an economy is at full employment and price stability) has been falling, the Federal Reserve in 2020 and the European Central Bank in 2021 revised their monetary policy strategy statements.

This report summarizes the discussion of these new frameworks at two panels hosted by the Hutchins Center on Fiscal and Monetary Policy in November 2021. The first panel, moderated by Rachana Shanbhogue of The Economist, included Richard Clarida, then vice chair of the Federal Reserve Board and a key architect of the new framework; Philip Lane, a member of the ECB’s Executive Board and its chief economist; and Ben Bernanke, distinguished senior fellow at Brookings and former chair of the Federal Reserve. Following that, David Wessel of the Hutchins Center moderated a panel of Fed watchers: Julia Coronado of MacroPolicy Perspectives; William Dudley, former president of the Federal Reserve Bank of New York; Ayşegül Şahin of the University of Texas at Austin; and Tiffany Wilding of PIMCO. Video and transcript of the event are available on the Brookings website. 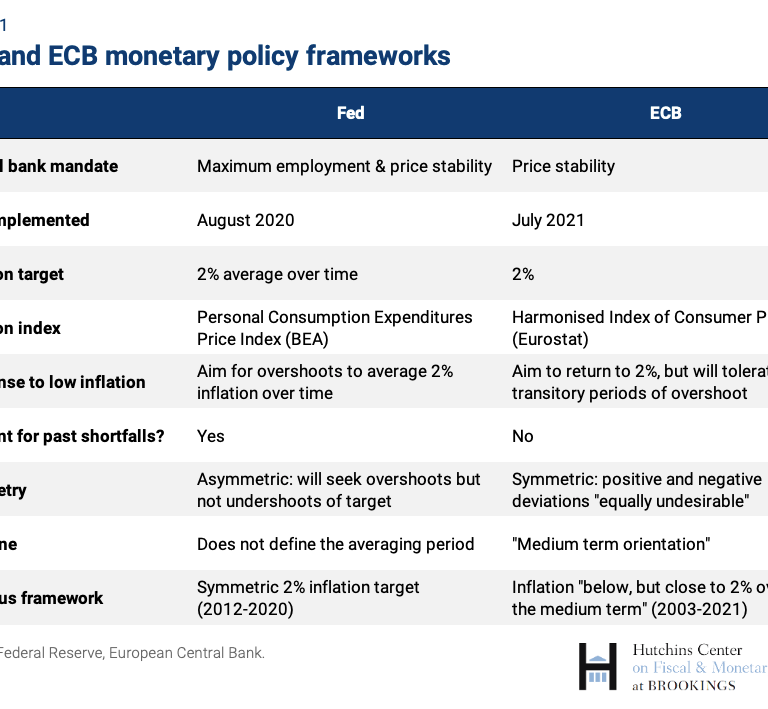 The economy and monetary policy: A conversation with Fed Vice Chair Richard Clarida

Should the Fed regularly evaluate its monetary policy framework?

Why the Fed needs a new monetary policy framework