Eighty-five percent of American students attend school in a state that has adopted the Common Core State Standards. As these states transition from adoption to implementation of the new standards, many are grappling with how best to assess whether students are learning the material contained in the Common Core. Debates about the costs and merits of Common Core tests are raging in states across the country. In this report, Brown Center Fellow Matthew M. Chingos critically examines the likely costs of the various assessment options that are available to states, but urges states to also consider test quality in addition to cost when choosing an assessment.

This report analyzes the tests being developed by PARCC and SBAC (the two consortia of states that have received federal funding), as well as other alternative offerings that are currently or soon to be available on the marketplace. The estimated costs of PARCC and SBAC tests ($29.50 and $22.50 per student, respectively) are not far from the nationwide average of what states currently pay for their existing tests, but many states have still expressed concerns about these costs.

Such concerns about the cost of the consortia’s tests likely stem in part from a sense of uncertainty because the consortia have announced estimates, but not firm prices.  States may be concerned that the price will go up, especially if states leave the consortia, and that they will be left without an affordable alternative.  Opponents of the Common Core may be hoping that the withdrawal of a few states from the common assessments will lead to the unraveling of the consortia.

This report investigates the likelihood of those possibilities through an empirical analysis of the consortia’s cost estimates, which shows that the departure of a few states will have a minimal impact on cost.  For example, the possible departure of Florida, PARCC’s second-largest member, only means a per-student price increase of about 60 cents for the remaining states.

This analysis also shows that rising costs from defections are unlikely to pose a serious threat to the existence of the consortia.  If all of the states where political debate over the Common Core is most intense were to drop out of the consortia, costs would increase by no more than $2 or $3.

Estimated Cost of SBAC Assessment, by Size of Consortium 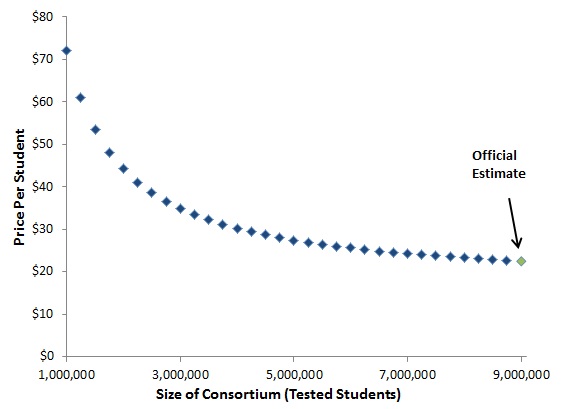 In addition to demonstrating that states have little reason to worry that the costs of consortia tests will rise dramatically, the report also notes that any available assessment option costs significantly less than a textbook.  The author discourages states from sacrificing test quality in order to save $10 or $20 per student – a drop in the bucket of an education system that spends more than $10,000 per student annually.