More than four years after the Great Recession, America’s economic rebound remains anemic. Despite recently improved forecasts, the nation still faces a job deficit of nearly 8 million, elevated poverty, a negative trade balance, and persistent questions about the competitiveness of its industries and workforce.

Clearly, much work is needed to renew the economy by reorienting it away from its pre-crash obsession with consumption and debt and toward a new focus on innovation, technology, exports, and opportunity.


And yet, who will lead this work? With Congress largely gridlocked, Washington has become a non-factor. Nor do federal budget realities point to solutions: Spiraling health care spending will limit critical investments in innovation, education, and infrastructure for years.

There is hope in some quarters, though. Across the country, smart, ambitious states and regions are stepping up to grow jobs and make their economies more competitive and prosperous by locking their focus onto what the Brookings Metropolitan Policy Program and our associates at McKinsey & Company call “advanced industries.” 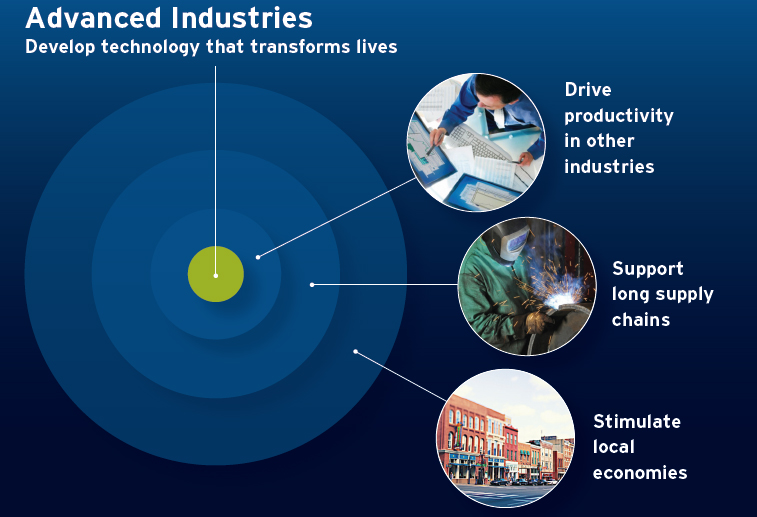 Consequently, the state of Colorado—as part of the Colorado Blueprint economic planning process—commenced a systematic search for a strategy to advance its formidable aerospace industry in the summer of 2012. Likewise, in 2013, the state of Tennessee executed a similar exercise focused on its signature auto manufacturing industry. In both cases, a focused state sensed disruptive change in the air and sought to defend and expand a critical industry, so as to grow more and better jobs during a pivotal decade.

In doing so, Colorado and Tennessee have stepped forward as leaders. In parallel, they have acted on their own to renew the nation’s strategic economic base from the “bottom up”: state by state and region by region. Together, these and other efforts to expand America’s advanced industries point to an important new priority for economic discussion, research, and work to renew the nation’s economy in support of broad-based prosperity.