The 2020 census showed that population growth during the 2010s was the second-slowest in U.S. history, and census projections taken before the pandemic suggest low growth into the future due to the nation’s aging population. This analysis shows how the most recent data on national population growth fits into a longer trajectory, as well as how demographic growth patterns in states differ from previous years.1

The COVID-19 pandemic and a historic drop in population growth

Throughout the 20th century and into the 21st, U.S. population growth has ebbed and flowed in response to wars, immigration and fertility patterns, and economic booms and busts. 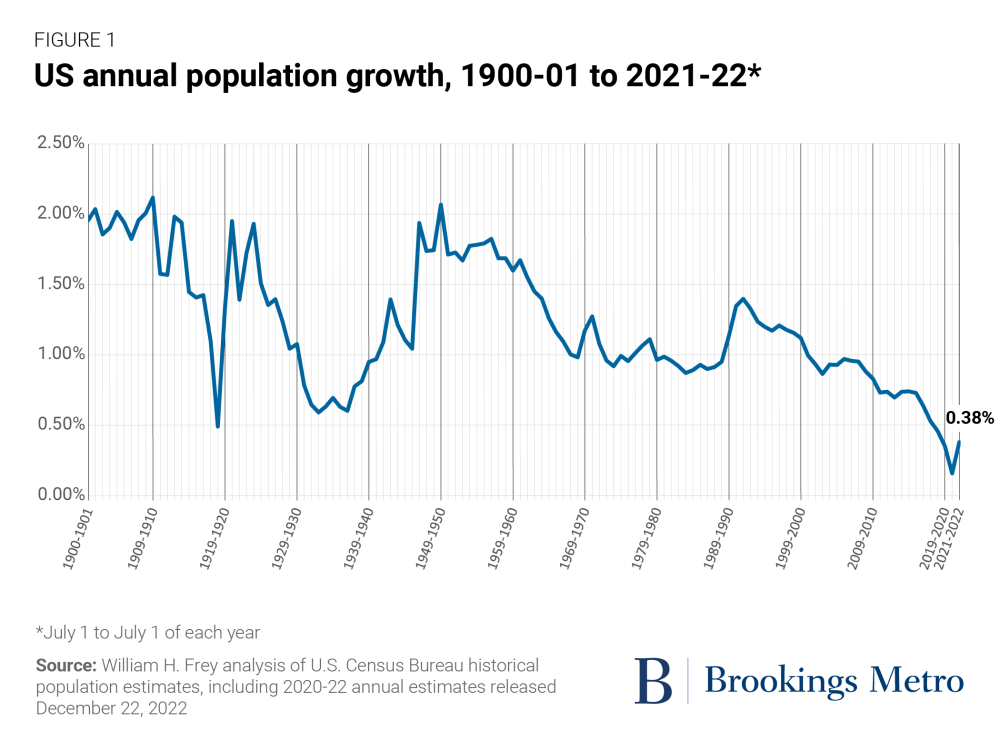 Periods of slow growth—dipping to annual rates of 0.6%—occurred during the Great Depression in the late 1920s through mid-1930s, when both fertility and international migration declined. Conversely, high fertility and economic growth associated with post-World War II economic prosperity brought population growth to almost 2% during the 1950s, before declining to below 1% in the 1970s and 1980s due to fertility drop-offs associated uneven economic times and women’s entry into the labor force. In the 1990s, both immigration and fertility rose again, contributing to growth rates as high as 1.4%.

This changed with the onset of the 21st century, especially during and after the 2007-2009 Great Recession, which reduced fertility as millennials postponed marriage and child-bearing. Later, immigration restrictions enacted by the Trump administration contributed to further growth slowdowns. Thus, even before the pandemic hit, national population growth rates had dropped from 0.83% in 2009-10 to 0.46% in 2018-19.

In 2019-20—a year partially affected by the pandemic—the national growth rate dropped to 0.35%. Then, during the first full pandemic year of 2020-21, annual growth fell to a historic low of 0.16%—a result of the substantial rise in deaths coupled with declines in births and immigration. Still, U.S. natural population increase (the excess of births over deaths) was falling for several years before the pandemic (see downloadable Table A).

The role of immigration in the recent growth uptick

Both reduced natural increase and lower immigration helped to diminish national growth heading into the 2020-21 low point. To some degree, the former reflects the increased age of the U.S. population, which has led to proportionately fewer women in their child-bearing ages and a rise in Americans in older, high-mortality ages. In the long run, the aging of the population can lead to lower levels of natural increase. In the U.S., the annual population gain from natural increase changed from well over 1.5 million people prior to 2010 to less than 1 million in 2017-18, and 677,000 in 2019-20 (see downloadable Table A).

Immigration, in contrast, is more heavily influenced by policy and economic trends. In the mid-2010s, the nation saw gains of over 1 million net immigrants from abroad per year. Yet largely because of government restrictions, that dropped to 477,000 in 2019-20.

In the newly released census data for 2021-22, both natural increase and immigration rose, but due to increases in legal immigration, that component added over 1 million people to the national population, compared to 245,000 for natural increase. Thus, the bulk of last year’s increase in population growth (about 86%) was due to a rise in immigration.

The nation’s 2021-22 growth rate of 0.38% is still among the lowest since 1900. However, without immigration, it would be much closer to the previous year’s historically low rate.

The new census data shows that 26 states and the District of Columbia registered higher population growth or reduced losses in 2021-22 than in the previous year (see downloadable Table B). Texas, Florida, North Carolina, Georgia, and Arizona gained the most population numerically; as Figure 3 shows, each of these states gained more residents than last year, with the first four showing higher gains than in each of the previous three years, including the pre-pandemic year of 2018-19.

Texas and Florida stand out. Both are among the top states in attracting immigrants and domestic migrants, with Texas also ranking first in natural increase (see downloadable Table C). Regionally, the South and West “Sun Belt” states stand out as the top population-gaining states in 2021-22; of the 26 states that gained more (or lost fewer) people that year compared to last, 17 were located in the Sun Belt.

States that saw population drops are not just confined to the Northeast and Midwest. Five population-losing states (California, Oregon, Hawaii, New Mexico, and Alaska) are in the West, and four (Louisiana, West Virginia, Maryland, and Mississippi) are in the South.

The large national rise in net immigration from abroad benefitted all states, as each gained more immigrants in 2021-22 than in the previous year (see downloadable Table C).

About half of states saw more deaths than births

The COVID-19 pandemic—which prompted a rising number of deaths and falling number of births—was responsible for this. In the year before the pandemic, only four states (West Virginia, Maine, New Hampshire, and Vermont) registered natural decreases, and at relatively low levels. In 2021-22, that number was 24 states, with the highest levels of natural decrease in Florida, Pennsylvania, Ohio, Michigan, and West Virginia, which have relatively older populations.

Among the 26 states (as well as the District of Columbia) that had more births than deaths in 2021-22, Texas, California, and New York led the list, with each showing notable gains compared to the prior year. Twenty of these 26 states registered higher natural increase levels in 2021-2022 than in the previous year.

Domestic migrants head to the South

In a national slow-growth environment, domestic migration within the country can make a huge difference in how states’ populations fare. In normal times, domestic migration flows often respond to labor market conditions and relative housing costs. But during the pandemic years, these patterns also reflected movement away from denser and more urbanized areas and states. The new population estimates make plain that this occurred over the 2021-22 period, as southern states attracted increased domestic migration.

Figure 5 shows net domestic migration patterns among the four census regions for 2021-22 and the three years prior. Southern states have increasingly emerged as the major destinations for domestic migrants as they leave the other regions.

The six states that gained the most population through domestic migration (Florida, Texas, North Carolina, South Carolina, Tennessee, and Georgia) are all in the South, and each except one (North Carolina) attracted more domestic migrants in 2021-22 than in the previous three years. Among all 16 southern states, only four (Louisiana, Mississippi, Maryland, and Virginia) and the District of Columbia experienced net domestic out-migration (see downloadable Table C).

Perhaps most surprising is the domestic out-migration from the West. Six of that region’s 13 states saw net domestic out-migration: California, Oregon, Washington, New Mexico, Hawaii, and Alaska. Moreover, six of the remaining seven western states showed smaller migration gains in 2021-22 than in the previous year.

While California registered the greatest domestic out-migration of all states during the early pandemic by far, its recent out-migration—while still substantial—has been reduced. This, coupled with decreased in-migration to other western states such as Nevada, Arizona, Idaho, and Utah, suggests that the pandemic-related shift eastward from California has tapered off somewhat. This differs from the sharp increase in migration to southern states in 2020-21.

What will be the ‘new normal’ for population growth?

After a dramatic demographic downturn both nationally and locally, it is difficult to predict what the “new normal” for population growth might imply.

One reason for that is the data examined is from mid-2021 to mid-2022, when COVID-19 was in full effect—the number of deaths rose compared to the previous year, and there was continued caution about working in highly dense places. Thus, the rise in natural increase reflected an increase in births rather than a decline in deaths. And while deaths may continue to decline as the pandemic loses its force, some analysts foresee a long-term continuation of the low birth rate trajectory observed before the pandemic.

More difficult to predict is whether or not new generations of young people or workers in general will return to large cities and more urbanized parts of the country, as the nature of hybrid work evolves.

Perhaps the most manageable part of future population growth lies with immigration.  Population projections show that increased immigration—even to levels of 1 million migrants a year—will not only increase the national growth rate, but also slow the nation’s aging population trajectory and lead to increased numbers of children and younger members of the labor force.

The new estimates show that immigration was the main contributor to the nation’s uptick in growth from the previous year’s historic low. Thus, developing an immigration policy that is economically and socially sensible could be an important tool for moving the nation back toward long-term demographic health.