As evidenced by a seemingly endless list of controversies – from Common Core to teacher evaluations, from charter schools to alternative teacher certification programs – modern U.S. education policy has become the subject of intense public focus. A new generation of education advocacy groups has emerged with the aim of influencing that policy at the local, state, and federal levels. These new groups, heavily funded by reform-minded philanthropies, are reshaping the dynamics of education politics. But are these groups truly influencing public policy? And if so, how strongly and through which channels?

The methods that have historically been used to measure influence are weak. For example, a typical reputational survey asks respondents to rank order a list of entities for influence.  The results cannot be used to quantify the amount influence that was exercised by any entity, what any entity influenced, or the mechanisms of advocacy that were employed.

Using the passage of Louisiana’s school choice legislation as a case study, this report introduces a new method to more accurately study the influence of advocacy efforts.

The researchers’ method* involves a survey instrument, the Survey with Placebo (SwP), which asks respondents to rate the influence of a non-existent advocacy group (the placebo) along with actual entities engaged in advocacy. The ratings of the placebo entity provide a zero point on the scale of influence, against which all the actual advocacy organizations can be compared.  Additionally, the SwP was built around the study of one particular outcome: the passage of Louisiana’s school choice legislation. Thus, the question of what is influenced is explicit rather than being ambiguous as in reputational survey.

In this study, the authors’ qualitative research paints a clear picture of the paths of influence designed by advocacy groups seeking to influence the passage of Louisiana’s House Bill 976. The results of the SwP, however, allow the researchers to quantify the actual influence of those advocacy groups as well as their specific advocacy channels.

Findings on the Influence of Education Advocacy 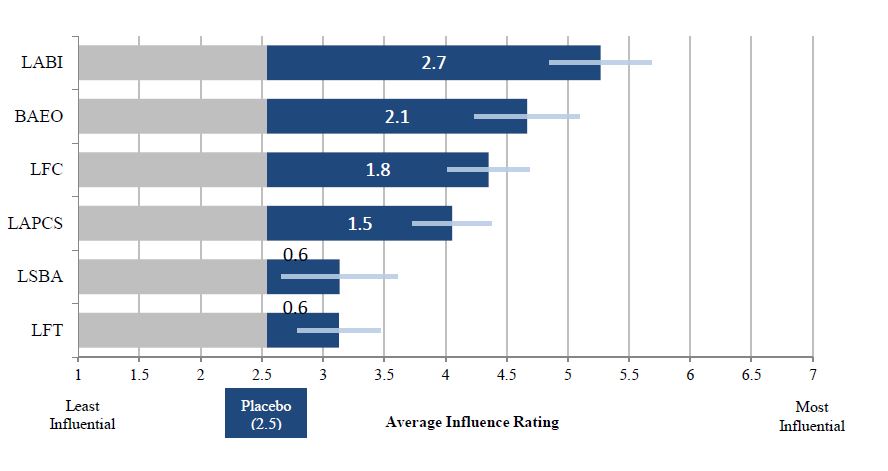 This figure shows the mean influence ratings for each examined advocacy group, highlighting the difference between the group’s mean rating and the placebo mean rating.

* For complete details on the survey instrument and other aspects of the methodology, see the accompanying technical appendix.