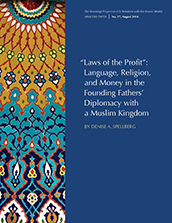 In “Laws of the Profit”: Language, Religion, and Money in the Founding Fathers’ Diplomacy with a Muslim Kingdom, Denise Spellberg examines how linguistic differences initially hindered the United States when negotiating one of its first treaties with a major Islamic power, the kingdom of Tripoli.

Words and their 18th century meanings continue to influence contemporary understanding of early diplomatic interactions between the United States and the Islamic world. Although the treaty was designed to resolve a financial conflict between the United States and Tripoli over the latter’s state-sponsored corsairs (what some might call pirates), some historians have characterized it as the first U.S. response to terrorism and have blamed religious differences between the two powers for delaying the signing of the treaty. Such imprecise language not only obscures what was at stake in one of the first U.S. interactions with a Muslim power, argues Spellberg, it also gives the modern reader the false impression that U.S. relations with the Muslim world have been troubled by terrorism and religious divisions from the beginning.

Religious differences between the United States and Tripoli, while significant, were not what kept the two negotiating partners apart, writes Spellberg. Linguistic barriers, although substantial, were equally surmountable. What divided the United States and Tripoli was an economic disagreement over commercial access to Mediterranean ports, which took two decades of diplomacy and war to resolve.

More recently, President Obama’s speechwriters made use of the treaty’s reference to Muslims in his speech at Cairo University in 2009, creating diplomatic history by setting a positive precedent for  future U.S. relations with the Islamic world.