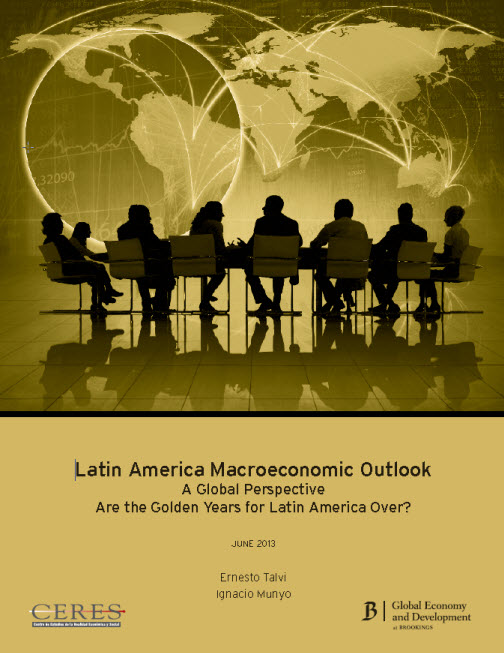 Latin America is cooling off and it is doing so sharply.
In contrast with the 6.6 percent average growth rates
prevailing between September 2003 and September
2008—the pre-Lehman-crisis “Golden Years” for the
region—LAC-7 GDP growth rates in 2012-2013 are
decelerating significantly and reverting back to their
historical average of 3.7 percent displayed over the
last 20 years. Moreover, growth rates are cooling off
in almost every major country in the region with the
notable exception of Mexico.

This cooling-off has occurred in spite of the fact that
external conditions for the region are slightly more
favorable today than they were during the Golden
Years. If one takes a close look at the key external
drivers of Latin America’s growth rates identified in
Izquierdo, Romero and Talvi (2008), a model that
does a very good job of tracking out-of-sample growth
rates in the region, the picture that emerges is the
following: i) the global growth rate (the G-7 plus China)
is currently 0.8 percentage points below the observed
rates during the Golden Years; ii) commodity prices
are 40 percent above the average prices observed
during the Golden Years and very close to the
maximum values of that period; iii) emerging markets’
bond yields are close to 5 percent, a rate which is not
only significantly below the average of 7.4 percent
that prevailed during the Golden Years but also is
significantly below the minimum rate observed during
that period; and iv) capital inflows to the region—
currently running at approximately $270 billon—are
three times the average observed during the Golden
Years and higher than the maximum level achieved
during that period.

In fact, if we use the external factors model just
mentioned to simulate future performance under
current external conditions and those prevailing
during the Golden Years, growth rates and output
levels are consistently higher under current
conditions. This means that the current combination
of external conditions—lower global growth with
higher commodity prices and lower capital and
borrowing costs—is overall more favorable than the
one prevailing during the Golden Years.

How can we explain the paradox of the regional
cooling-off in economic activity in a context where
external conditions are, on average, even better than
those prevailing during the Golden Years? During
the Golden Years, external conditions improved
significantly relative to the preceding period (1998-
2003): Global growth increased from 3.0 percent to
3.8 percent, commodity prices jumped an average
of 75 percent, and the yield of the emerging market
bonds fell from an average rate of 13.5 percent to 7.4
percent.

The previous analysis implies that we should be
careful when reading Latin America’s current growth
performance: It is not the case that the region is doing
relatively well in a more hostile external environment;
rather, the region’s growth rates are slowing down
significantly in spite of the fact that the external
environment remains favorable overall. In other
words, unless we anticipate that external conditions
will improve significantly relative to current levels, the
observed slowdown in growth rates is not an oddity
that will go away anytime soon. Rather, it is more likely
to be the “new normal” even if external conditions
remain favorable.

This report also explores whether idiosyncratic factors
in Latin America are playing a role in either mitigating
or contributing to the cooling-off set in motion by the
dynamics of external factors. After many years of
high growth well above the region’s historical average,
it may be the case that production possibilities
are being exhausted in a region where, in many
cases, improvements in physical and technological
infrastructure and human capital may have not kept
up with the strong output growth performance of the
past few years. If this were the case, the rate of growth
of economic activity should decline due to restrictions
in some of the inputs of the production process that
make it impossible for output to continue growing at
previous rates. For this reason, among the multiple
relevant idiosyncratic factors, we focus on identifying
countries in the region where supply bottlenecks may
have developed.

To conclude, current growth rates in Latin America are
cooling off in spite of a still very favorable external
environment as the impact of the past improvements
in external conditions on growth dissipate through
time and supply bottlenecks kick in. Even if external
conditions for the region remain favorable, unless
they start improving once again they are unlikely to be
a renewed source of stimulus for higher growth rates
as they were during the Golden Years, when external
conditions markedly improved.