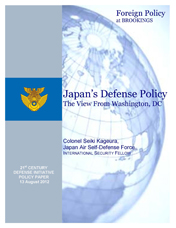 When it comes to Japan’s defense, the Japanese political system and the Japan Self-Defense Force independently decide the national policies as they are ultimately responsible for the country’s safety and security. However, due to the crucial nature of the U.S.-Japan alliance to Japan’s overall security, it is impractical not to take into account American thinking. As a result, it is important to better understand where and how American thinking on Japanese security is influenced.

The scope of this research goes beyond the official statements of the legislative and executive branches of the U.S. government. The author sought to explore the role that experts and think tanks play in American discourse and opinion of Japanese security. This included extensive research of American media reports on Japanese security issues as well as interviews of key American experts and opinion leaders on Japan, mostly located in and around Washington, DC.

This project is therefore unique and novel in its approach to this key topic in Japan and the U.S. A number of Japanese reports have been published in the past about American experts’ views towards Japan, yet few incorporate both a survey of media and interviews with key current figures or focus exclusively on Japanese defense. Moreover, such viewpoints and thoughts are always changing; therefore, it is meaningful to spot the current status at such a crucial time of change, both in the U.S. and Japan, not to mention the wider Asia-Pacific region.

The path to protecting bipartisan US support for Taiwan