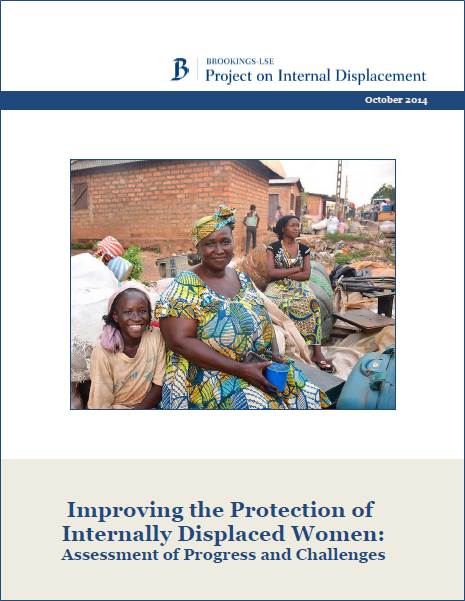 Women account for around half of the world’s 33.2 million internally displaced persons (IDPs). In addition to the many general human rights violations faced by all IDPs, displaced women are often at greater risk than other affected populations. They face loss of livelihoods and key documentation needed for daily life. They tend to have less access to assistance, and struggle to access adequate education, healthcare, training and livelihoods. They are more susceptible to sexual and gender-based violence, are likely to face difficulties in exercising rights to housing, land and property, and are often excluded from decision-making processes. These human rights violations are compounded by conflict, which exacerbates pre-crisis patterns of discrimination. Age, group affiliation (e.g. membership in minority groups), disability, civil status, socioeconomic status and displacement itself can place particular groups of internally displaced women at heightened risk. For example, indigenous or elderly women who are displaced may find themselves doubly disadvantaged. And the protection risks that displaced women face depend in large measure on the specific context in which they find themselves. Women who have been recently displaced usually face different risks than those who have been displaced for twenty years and women living in camps usually have different needs than those living with host families.

One of the positive developments over the past decade has been the increased attention paid to refugee women in the context of United Nations emphasis on women, peace and security. In recent years there has been awareness that greater focus is needed on women who are displaced within the borders of their own countries. Indeed, the rights and needs of women and girls in emergency and post-conflict situations have received increased attention since the 1990s from states, international agencies, civil society organizations and other relevant actors. These actors have also sought to promote gender-sensitive approaches to humanitarian and development assistance and early recovery. Their attention to these issues is reflected in various resolutions, policies, guidelines and handbooks, as well as gender-mainstreaming efforts and numerous targeted programs. A great deal of effort has been devoted to addressing gender concerns in policies and programs. However, much more work is needed.

In an effort to draw attention to the particular needs and resources of internally displaced women the UN Special Rapporteur on the human rights of internally displaced persons, Dr. Chaloka Beyani, presented a report to the UN Human Rights Council (HRC) in March 2013 which provided an overview of some of these issues. This report was in line with Dr. Beyani’s HRC mandate, which among other things, asks him to: “integrate a gender perspective throughout the work of the mandate, and to give special consideration to the human rights of internally displaced women and children, as well as of other groups with special needs, such as older persons, persons with disabilities and severely traumatized individuals affected by internal displacement, and their particular assistance, protection and development needs.” Dr. Beyani’s attention to gender is also part of his work in promoting a more effective and equitable response to internal displacement through a gender-sensitive implementation of the UN Guiding Principles on Internal Displacement.

This publication is an expanded version of Dr. Beyani’s 2013 report to the HRC and is intended for a broader audience including government, humanitarian and development actors as well as IDPs and the general public. This publication is based on his analysis of the progress and challenges to date with regard to the protection of and assistance to internally displaced women as well as the related recommendations presented in his report.