There is ample evidence that children born to poorer families do not succeed at the same rate as children born to the middle class. On average, low-income children lag behind on almost every cognitive, behavioral, emotional, and health measure. These gaps start early—some of the newest research suggests that cognitive gaps are detectable in infancy—and persist throughout childhood and into adulthood.[1] What’s more, the trend has been worsening over time: despite improvements in closing gender and race gaps over the last half century, the difference between average outcomes by socio-economic status has gotten larger in test scores, college enrollment rates, and family formation patterns.[2]

Our own research is delving into the reasons for these widening gaps by looking at the life trajectories of more and less advantaged children. At Brookings, we’ve developed a framework for measuring children’s life chances, called the Social Genome Model (SGM).The SGM tracks the academic, social, and economic experiences of individuals from birth through middle age. Using the model, we hope to identify the most important paths to upward mobility. We divide the life cycle into five stages and specify a set of outcomes for each life stage that, according to the literature, are predictive of later outcomes and eventual economic success. These outcomes are not only predictive of later success but were chosen to reflect widely-held norms of success for each life stage (Figure 1).[3]

At each life stage, low-income children succeed at much lower rates than do their better-off peers (Figure 2).

Figure 2. Success Rates at Each Life Stage, by Family Income 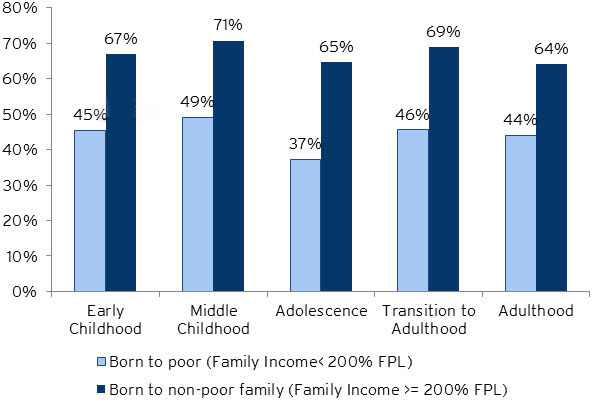 Preliminary results from the SGM show that success at any individual stage of life greatly enhances the chance of success at the next stage. For example, a child who is ready for school at age five is nearly twice as likely as one who is not to complete middle school with strong academic and social skills.[4] Similar arguments from Nobel laureate James Heckman and others suggest that because of the cumulative nature of skill development, intervening earlier in the life cycle rather than later is likely to be the most effective strategy for promoting opportunity among the disadvantaged.[5]

Using the SGM, we can ask what the world might look like if we could successfully eliminate the income-based gap in early childhood. In this “what-if” experiment, we simulate what would happen if we improved the average chances of school readiness at age five for low-income children so they matched the levels of higher-income children (Figure 3).[6]

The good news is that there’s evidence that existing programs might have a chance of recreating that kind of impact on early childhood outcomes. A meta-analysis of rigorously evaluated preschool programs found a range of effects on children’s cognitive and behavioral outcomes.[7] When we use the upper bound effect sizes to simulate the long-term impact of providing high-quality preschool, we see low-income children’s success rate rise to 63 percent—nearly the levels in figure 3.[8]

The less encouraging news is that under such a scenario, the impact fades over time. The gap closed at age five reopens by the end of elementary school, continues to widen, and then in adulthood, increases the chances that a child will reach the middle class by middle age by about 5 percentage points. 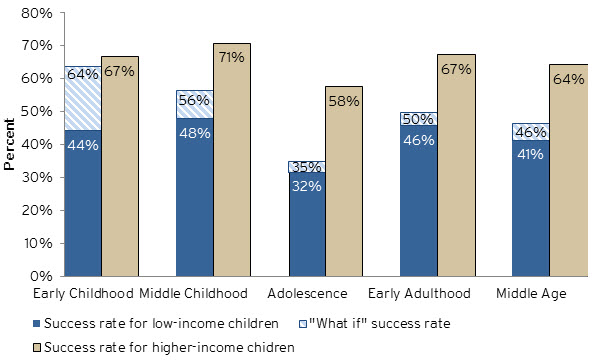 It seems clear that early childhood intervention alone is not enough to improve outcomes for adults at middle age. If we want to see larger and longer-lasting effects on adult outcomes, we may have to intervene in early childhood, and then again as children reach elementary school, adolescence, and beyond. To test the impact of such a strategy, we simulated the combined effect of programs with strong empirical evidence that they improve outcomes for lower-income participants (Table 1).

In early childhood, we chose a program that targets children’s earliest and most important teachers: their parents. There are a number of programs designed to teach specific parenting skills that improve the quality of parent-child interaction, which is a predictor of the child’s later outcomes. One such program, PALS (Play and Learning Strategies), was tested on low-income mothers in Texas, and was found to improve emotional support of children.[9] With parenting skills strengthened, we then assumed these children would all go to preschool, using the upper bound estimate of its impact on cognitive and behavioral measures.

After completing preschool, we assumed that the children would continue on to elementary schools that offered an effective reading program, such as Success for All (SFA). SFA is a school-wide reform program, primarily for high-poverty elementary schools, with a strong emphasis on early detection and prevention of reading problems before they become serious. The evidence from a large, multi-site trial shows that SFA students scored 25-30% of a grade level higher in reading ability at the end of second grade.[10] In addition to SFA, we also simulated the impact of a strong Social Emotional Learning (SEL) program. SEL programs include a broad range of interventions that approach teaching and learning as more than a purely academic endeavor, but rather as something that engages behavioral, emotional, and relational competencies. Evidence suggests that SEL programs improve both behavioral and academic outcomes.[11]

Finally, in adolescence, we intervene again to assume that the target students attended a small school of choice (SSC) for high school. SSCs are a model of small, academically nonselective, four-year public high schools opened in New York City to replace large, failing high schools in high-poverty neighborhoods. Between 2002 and 2008, New York closed 23 large high schools with graduation rates under 45%, opened 123 new small high schools of choice, and implemented a centralized high school admissions process. A lottery-based study of SSCs by MDRC reports that SSCs significantly improve outcomes for students with diverse backgrounds. Students are more likely to be on track during the critical freshman year, and the four-year high school graduation rate rose 8.6 percentage points relative to the control group.[12]

Table 1: Effects of Interventions at Each Life Stage

Figure 4. Success Rates by Stage by Income at Birth, After Intervention at Multiple Stages for Kids Born Low-Income 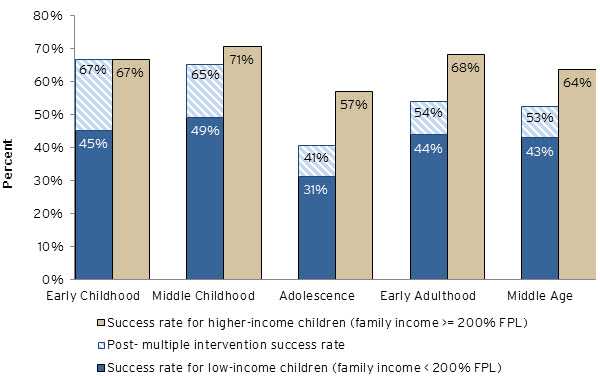 Furthermore, these multiple interventions seem to pass a simple cost-benefit test. As shown in Table 2, we estimate the total cost per child for all of these programs combined coming in at just under $25,000. The lifetime income of the average individual receiving these programs would increase by more than $132,000. While we have not yet conducted analysis of the benefits to taxpayers, these would likely be positive as well, since society would benefit from extra taxes paid on the impacted individuals’ extra income, from savings on social safety net benefits those individuals might otherwise receive, and from lower costs for crime, poor health, and related social problems.

Table 2: Summary of Costs and Results of Multiple Interventions

Existing programs can provide opportunity-enhancing supports at every life stage, and this need not cost more than what we are spending now, at least as measured over a child’s life cycle. While no single intervention currently exists that can alone dramatically improve children’s life chances, these simulations suggest that we don’t need to wait for one to be invented in order to begin making real progress.

[3] For more on the SGM, and a technical explanation of how simulations are conducted, see Winship and Owen, 2013.

[8] Using a range of effect sizes from the literature to perform an SGM simulation of universal preschool, we found that providing preschool to low-income students who would otherwise not have attended any preschool at all would raise early childhood success rates from 44% to between 48% (lower bound) and 63% (upper bound).