Recent attention to the “winner-take-most” nature of the current tech-driven economy has highlighted the stakes for places. Today, states are engaged in a competition with other regions, and countries across the globe, to secure the economic well-being of their citizens.

Innovation, long a source of economic growth and prosperity for the most successful states, has only grown more important in this era of divergent outcomes and rapid technological change. As such, it is critical for jumpstarting state economies.

How this is playing out in Pennsylvania—and what other states are doing to jumpstart innovation—bears a close look now as the nation seeks to accelerate its recently slow productivity growth.

Historically, Pennsylvania has been an innovation leader, and today it retains a stable of effective, scalable innovation assets. This includes a robust university system that generates significant R&D, as well as a set of capable technology-based economic development programs that operate across the state.

However, in recent years, Pennsylvania’s innovation economy has gone flat, and the state has scaled back public investment in its most significant innovation resources. 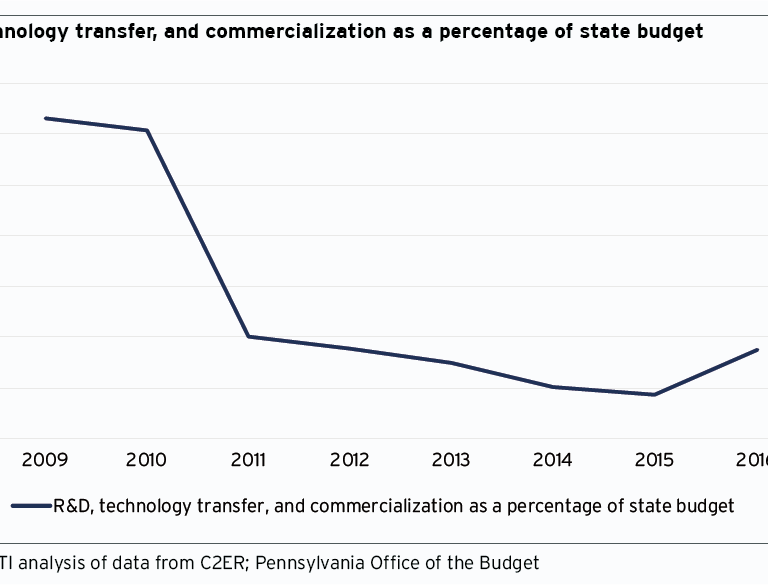 As a result, Pennsylvania’s innovation economy now faces a set of discrete challenges. They include:

While Pennsylvania is not alone in facing these types of challenges, other states are working proactively to overcome their own. This report documents ongoing initiatives in states seen as both competitor states and as national innovation leaders that contend with challenges similar to Pennsylvania’s.

To that end, the report and policy scan highlights 20 initiatives currently underway that states have designed to achieve the following outcomes:

In addition, these best practices suggest how states can catalyze increases in early stage financing as Colorado, Wisconsin, Tennessee, Georgia, and Maryland have done, and how they are trying to counter regional innovation gaps, as North Carolina, Connecticut, Rhode Island, Maryland, Massachusetts and Illinois are doing.

Some initiatives are incremental and address a narrow problem or leverage relatively few public resources, while others are aspirational measures that required substantial time, financial resources, and/or political will to enact. Regardless, all of the efforts are ongoing if not brand new, and help illustrate the depth of competition that Pennsylvania faces in today’s innovation-driven economy.

While Pennsylvania’s innovation economy has lagged in recent years, another path exists. Through a renewed commitment to inclusive innovation-oriented economic development, the commonwealth can chart a new course that bolsters economic growth and improves the living standards of its citizens throughout the state.

In that fashion, the commonwealth has the opportunity to regain the mantel of leadership and show how the entire nation should up its game.

Automation and AI will disrupt the American labor force. Here’s how we can protect workers

Tech is (still) concentrating in the Bay Area: An update on America’s winner-take-most economic phenomenon