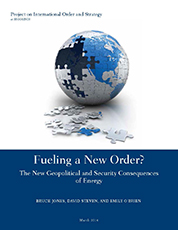 The paper Fueling a New Order? The New Geopolitical and Security Consequences of Energy examines impacts of the major transformation in international energy markets that has begun. The United States is poised to overtake Saudi Arabia and Russia as the world’s largest oil producer and, combined with new developments in natural gas, is on track to become the dominant player in global energy markets. Meanwhile, China is in place to surpass the United States in its scale of oil imports, and has already edged out the U.S. in carbon emissions.

Importance for the Evolving Global Order

These changes have profound geopolitical consequences, including in terms of security relations among the world’s top powers. Two things are clear: that these changes are strengthening America’s hand in the world; and that changes in global energy production and consumption are increasingly exposing the emerging powers to risks. America does not escape from risk, but the emerging powers have more vulnerabilities. 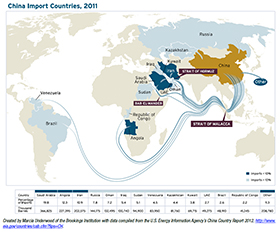 View a map of China’s energy imports in 2011

In addition to direct geopolitical risks, there are a set of risks that arise when strong international energy markets meet weak state institutions—or weak states altogether. These run the gamut from nuclear proliferation to pipeline security to conflict in fragile states to energy poverty.

The Role of International Institutions

Global institutions are not yet well-configured to help. Despite a recent proliferation of institutions, crucial gaps remain, and they fall short of an effective system for global energy governance. A combination of American leadership, overlapping interests with the emerging Asian powers and G-20 creativity are the most likely channels for knitting a more effective system for energy and climate governance. But tense geopolitical issues remain an obstacle.

The changing global energy landscape is a strong net positive for U.S. power. Although it’s still exposed to risks, the United States is being dealt new cards. It now has a choice how to play them: as a stick, as Russia has tried (with major blowback); or, as this paper argues, as a tool to foster a more stable international order.