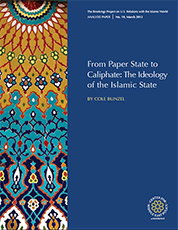 While the Islamic State dominates headlines through its brutal tactics and pervasive propaganda, there is little awareness of the unique ideology driving the group’s strategy. Drawing from private correspondence, statements, speeches, and Islamic theology, Cole Bunzel unpacks the ideology of the Islamic State in a new analysis paper.

The Islamic State, Bunzel argues, is inconceivable apart from its ideology. Like al-Qaida, the group identifies with a movement in Islamic political thought known as jihadi-Salafism, or jihadism for short. Jihadi-Salafism is a distinct ideological movement in Sunni Islam, encompassing not only militant groups, but also a global network of scholars, websites, media outlets, and numerous supporters on social media.

The Islamic State’s version of jihadi-Salafism is predicated on an extremist reading of Islamic scripture that is also textually rigorous, deeply rooted in a premodern theological tradition, and elaborated on by a recognized cadre of religious authorities. Founded in 2006 as an al-Qaida offshoot, the Islamic State’s founders espoused sharply anti-Shiite sectarian views and harsh application of Islamic law. Empowered by its ideology, the group rose from a “paper state” of little influence to a global jihadi movement.

Bunzel argues that the coalition military campaign may actually strengthen the Islamic State’s ideology by lending credence to one of the group’s fundamental views: the idea that Shia are conspiring with the United States and secular Arab rulers to limit Sunni power in the Middle East. Instead, Bunzel recommends regional governments take the lead in countering the Islamic State by deconstructing its violent ideology and eroding the legitimacy of its claims to statehood. Reducing the Islamic State from a “caliphate” back to a “paper state,” Bunzel writes, may stem the group’s influence.

On September 14, Vanda Felbab-Brown joins the Massachusetts Institute of Technology for the discussion, “US, Afghanistan, 9/11: Finished or Unfinished Business?“