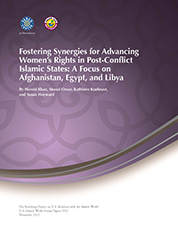 Finding common ground among diverse stakeholders on women’s rights in Muslim-majority states is critical to advancing democracy and human development. This paper examines ways to champion and sustain progress on women’s rights amid renewed Islamic constitutionalism by searching for common approaches among Muslim women activists, members of the ulama, and legal advocates.

Among the Key Findings:


Read other publications from the 2013 U.S.-Islamic World Forum »

Director, Center of Innovation for Gender and Peacebuilding - United States Institute of Peace