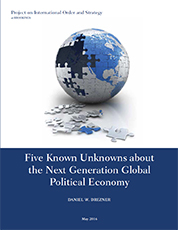 Rich and powerful actors believe that predicting the future will make them more rich and powerful. Great powers and international organizations have invested significant resources into crafting an accurate sketch of the next generation global economy, and within the private sector, multinational corporations and financial consultants have strong profit motives to do so as well. International financial institutions and budget planners in the developed world furiously debate demographic and economic trends to assess the future liabilities of governments. In theory, sovereign wealth funds are superior long-term investors because of their ability to ride out short-term reverses. In practice, these funds still need quality long-term projections to exploit that comparative advantage.[1] Central bankers have a strong incentive to develop accurate forecasts about their country’s economic future. Rising powers must assess whether their strategic ambitions are worth the economic fallout of heightened tensions with neighbors and the developed world.

But despite the bevy of powerful actors invested in knowing what the future of the global economy will look like, the quality of such forecasts has been extremely problematic. Even over the short run, both economic and geopolitical predictions have been far from perfect. The quality of long-range projections has been even worse. The result is a market for lemons in predictions: an inadequate supply of low quality forecasts.[2] Despite a strong demand for thinking about the next generation’s global economy, the supply has been insubstantial in every meaning of that word.

This paper examines why the ability to forecast the next generation global economy is so difficult, and offers up a different lens to think about the global economy for 2036. Far-range economic forecasting suffers from multiple flaws: the cognitive tendency to extrapolate from recent trends, the incentive to exaggerate the accuracy of predictions, and the failure to consider the possibility of discontinuous shocks. The deeper problem, however, is that many of the key drivers of generational economic change have little to do with neoclassical economics. Long-range projections require some evaluation of non-economic factors. In thinking about what the global economy will look like a generation from now, we need to consider factors that economists take as “given”—such as the global distribution of power and ideas—as well as the interplay between economics and the grand strategy of great powers.

With so many uncertainties, accurate predictions about the contours of the global economy circa 2036 are impossible to develop in 2016. What can be done, however, is to catalog the known unknowns that will frame the way the world looks a generation from now. Five significant political economy questions stand out: the uncertain pace of technological innovation, the severity of the middle-income trap for developing economies, the resiliency of constraints on great power wars, the depth and political effects of economic inequality, and the durability of free-market democracy’s appeal to the world’s governments. The combined effect of these known unknowns will determine whether the 2036 world economy looks brighter or darker than the world today.

This paper is divided into five sections. The first section considers the poverty of current global forecasting. The second section explains the reasons why making generational predictions is so difficult. The third section considers the proper way to frame thinking about the global political economy of 2036. The fourth section discusses the known unknowns about the next generation economy. The final section concludes.

[1] Indeed, in Thomas Piketty’s Capital in the Twenty-First Century (Cambridge: Belknap, 2014), the author argues that a source of the rising wealth gap in the future will be the fact that the richest individuals and institutions can afford the best financial planning.
[2] One could argue that the surfeit of punditry should count as forecasting, but much punditry, particularly in the global political economy, is too vague to be predictive. See Tetlock and Gardner, Superforecasting.