Access to good quality basic education for all children is a promise the global community must keep. 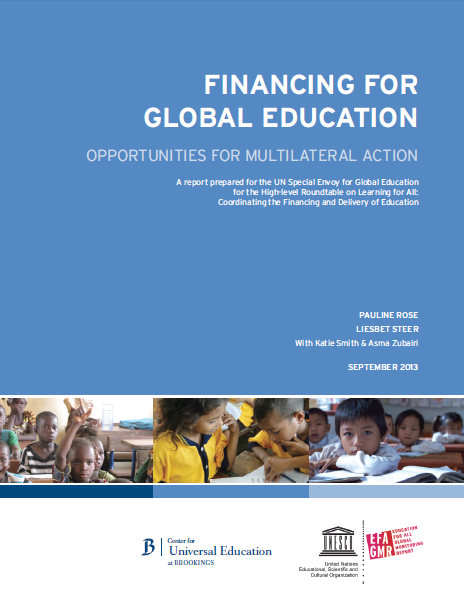 This will require reaching the 57 million children that are currently out-of-school, many of them from marginalized and disadvantaged groups. It will require ensuring that children in school complete their education and are learning — currently 250 million children in school cannot read or count at basic levels. It can be done, and we know how to do it. Many more children are in school today than ever before, and over the past decade the number of out-of-school children fell by 45 million.

While recognizing the complexity of the task and the need for a wide variety of solutions, this paper focuses on how the international community, and multilateral agencies in particular, can contribute through mobilizing the necessary financial resources and ensuring their effective use. After taking account of available domestic and donor resources, it is estimated that an additional $26 billion will be needed per year to make sure all children receive a basic education by 2015. This gap will need to be filled by domestic resources, as well as bilateral and multilateral donors. There is also opportunity for an increasingly important role for the private sector.

Based on data analysis and case studies of the six most important multilateral donors in education, this report explores the role they could play either through their own resources or through mobilizing others. Special attention is paid to 41 countries in greatest need. These countries include the 35 low-income countries whose own resources are limited, together with the 6 middle-income countries which are amongst the 10 countries with the highest out-of-school populations. Multilaterals’ significance in the aid architecture and their unique capacity to pool funding, convene donors and be a lender of last resort, provides them with a number of opportunities to play a significant role.

Public statements of multilateral institutions suggest a strong commitment to education. In addition, surveys of developing country stakeholders in governments, civil society and the private sector show a strong demand for education support more widely. However, despite this strong prioritization and demand there is evidence that multilateral support for basic education is slowing compared to other sectors and to bilateral donors. Moreover, some multilateral agencies have increasingly prioritized higher education over the past decade, putting pressure on basic education financing. This has led to a reduction in basic education’s share of the total education aid from multilateral institutions — from 62 percent at the beginning of the decade to 51 percent in 2011. Unless the overall envelope for multilateral aid is increased, there is a danger that growing support to new areas such as skills development will squeeze the scarce resources for basic education even further, to the detriment of the most disadvantaged.

Donors and multilateral agencies in particular, are strong advocates of internationally agreed aid effectiveness principles and are engaged in a number of country and global coordination mechanisms. Coordination at the country level is strongly promoted by the Global Partnership for Education through its support to Local Education Groups and the development of country-owned education sector plans. But despite significant efforts, education remains highly fragmented, leaving some countries with too many donors and high transaction costs and others with too few donors to generate a minimum level of support to meet needs. The number of donors active in education in the 41 countries in highest need ranged from 6 in the Central African Republic (CAR) to 23 in Tanzania. Nearly half of the countries in need have to coordinate with 15 or more donors in education. More than one-third of the donor relations in education in the 41 countries can also be considered as “non-significant” as defined by OECD-DAC.

While it is estimated to cost on average around $130 per year to provide a child with an acceptable quality of primary education in poorer countries, basic education aid disbursed per primary-aged child ranges from $7 in DRC to $63 in Haiti.

This report makes no claim to provide comprehensive recommendations for filling the remaining financing gaps, nor does it claim that solutions to provide education for all involve financing alone. Rather it suggests five opportunities for action which could make a major contribution in enhancing the role that multilateral agencies can play. Detailed proposals are made under each of the following:

Research Officer at the Education for All Global Monitoring Report