Tenure for public school teachers is increasingly under attack, with the Vergara v. California judge ruling in June that “both students and teachers are unfairly, unnecessarily and for no legally cognizable reason…disadvantaged by the current Permanent Employment Statute.” Last year, North Carolina legislators voted to phase out tenure, although that law was later blocked by a state judge. In 2011, Florida legislators ended tenure for new teachers beginning this year.

A primary stated goal of the California case is to “create an education system that gives every child a passionate, motivating and effective teacher,” and it is likely to become a model for efforts throughout the nation. According to one of the plaintiffs’ attorneys, “This is going to be the beginning of a series of these lawsuits that could fix many of the problems in education systems nationwide. … We’re going to roll them out to other jurisdictions.” A similar lawsuit has already been filed in New York State. If these challenges to tenure laws are successful, will they lead to improvements in education?

Proponents of the California effort posit that the state’s dismissal laws create a process for removing ineffective teachers that has myriad steps, takes years of documentation, and has a price tag in the hundreds of thousands of dollars, leading to an average annual dismissal rate of 0.0008 percent. This line of argument suggests that eliminating what the California judge called “über due process” for teachers will lead to increased dismissals of incompetent teachers. That is almost surely true on the margin, but will it make a significant impact on our public education system?

I bring new evidence to bear on this question by examining the early career paths of high-quality teachers and their less-effective counterparts, as measured by the progress their students make on state tests. The Brown Center’s talented research analyst Katharine Lindquist helped me calculate value-added measures of teacher effectiveness for 2,272 4th– and 5th-grade new teachers in North Carolina who entered the classroom between 1999-2000 and 2002-03, and tracked them for the first five years of their careers.[1]

During this time period, teachers in North Carolina usually earned tenure after four years in the classroom. The data do not allow us to determine which of the teachers who left their initial job were let go and which left on their own. But if principals were taking advantage of their pre-tenure freedom to fire at will, we’d expect to see the lower-value-added teachers leaving schools at much higher rates than their higher-value-added counterparts, and an increase in dismissals at the tenure decision point between the fourth and fifth years.

We do not find strong evidence that this is the case. The figure below shows that, in the fifth year of their careers, only 27 percent of the bottom quarter of teachers, in terms of their value-added, remained employed at the school where they began. This suggests success at eliminating ineffective teachers, but only somewhat more of the top quarter of teachers remained (38 percent). The highest retention rate, 44 percent, is for the third quarter—those above average but not at the top.

The gap in retention rates between the best and worst teachers is largest after the first year and gets somewhat smaller subsequently, suggesting that principals are not using the four-year period to identify and remove their lowest performers. Critically, there is no evidence that principals use the four-year decision point to cull the pool of teachers. If they did, we’d expect an uptick in departures between the fourth and fifth years. Instead, we find the opposite: for all four quality groups, the drop-off at this point is smaller than in any of the prior years.

Retention in the Same School, by Quartile of Value-Added to Student Achievement 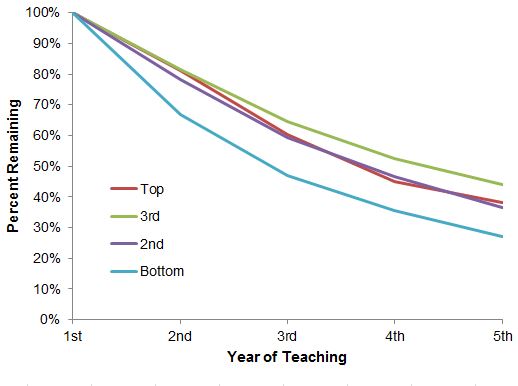 These data also reveal the significant challenges faced by schools in retaining teachers who have large positive effects on student achievement. Among the top quarter of new teachers in terms of value added, less than 40 percent remained in the same school five years after starting. And only a bare majority (54 percent) were employed anywhere in the state’s public school system. Despite being less likely to remain at their first school, the worst quarter of teachers stay in the profession at a similar rate, with about half remaining in the state’s public schools.[2]

These results come from a single state, but are remarkably consistent with research that Martin West and I carried out using data from Florida. We conducted a similar analysis and found little relationship between teacher effectiveness and retention, either in the same school or in the state’s public schools. Those data covered a period when Florida teachers earned tenure after three years. As in North Carolina, there was no apparent jump in teacher attrition at the tenure decision point in Florida.

An important limitation of these data is that they don’t allow us to determine which teachers were let go and which left on their own. But they provide some useful suggestive evidence on the potential of tenure reform to transform public education. First, administrators do not appear to be making significant use of their freedom to make pre-tenure personnel decisions to weed out poorly performing teachers. There are a number of potential explanations for this finding, including a limited supply of effective teachers (it’s rational to keep a mediocre teacher if the likely replacement will be no better), a lack of administrator ability to discern teacher quality (their observations are less predictive of value-added than those of outside observers), or a simple unwillingness to make the unpleasant decision of firing someone.

Brian Jacob’s research from Chicago shows that principals dismissed more non-tenured teachers when a new system made it as easy as clicking a button in a computer system, and that those dismissals were related to measures of teacher performance, including evaluations. However, in the wake of the policy there were still many principals who did not dismiss any teachers, including in the lowest performing schools. Jacob interprets this as evidence that factors such as social norms and the supply of qualified teachers are potentially important.

Second, efforts to increase the supply of high-quality teachers will be hampered by the difficulty public schools have at retaining their most capable employees. Replacing a teacher judged to be ineffective with a replacement of unknown quality will likely have a smaller positive impact than retaining a teacher who has already demonstrated effectiveness in the classroom. Given that tenure reform potentially impacts the first channel but not the second, it likely has less potential to be transformative than many advocates hope.

Assuming policymakers are not willing to trade tenure for an increase in pay for all teachers, the optimal tenure policy would provide due process protections but only to the extent that they are valued by good teachers. Good teachers might feel they need protection from capricious actions by administrators, but have no use for, and thus would not value, a process so onerous that it could only serve to protect the worst of the worst. Tenure reform should balance the benefits of using this protection to attract and retain good teachers with the costs it imposes by making it more difficult to eliminate bad teachers.

Advocates of efforts to relax firing protections are likely to be sorely disappointed in the results of such reforms if they are enacted in isolation for at least two reasons. First, sensible reforms to tenure laws will have little impact unless administrators make greater use of their newfound (and existing) flexibility, or other mechanisms are put in place to tie personnel decisions to teacher performance. New teacher evaluation systems are the latest effort to measure and improve the quality of the teaching workforce, but these new systems have already raised concerns that they will be subject to the same rating inflation by administrators that plagued previous systems. Principals need to face clear incentives both to rate teachers as accurately as possible and to act on those ratings.

Second, policies surrounding teacher dismissal may be the less important side of the teacher quality coin. The failure of the public education system to retain its best employees represents a wasted opportunity to improve student outcomes. Efforts around teacher retention need to focus on this critical group of employees, who may leave in part because they have stronger earnings opportunities outside education than their less-effective colleagues. Personnel policies that treat different teachers differently should be a focus of efforts to increase access to high-quality instruction for all students. If schools did a better job at keeping their best teachers, they would be in a stronger position to let go of their worst.

[1] We calculate value-added using the standard method of regressing test scores on prior-year scores and demographic controls. We average value-added over two subjects (math and reading) and all years that the teacher spent in the school where she began her career.

[2] Teachers who remain in the public school system do not necessary remain as 4th– and 5th-grade teachers. Using data from Florida, Martin West and I found that less effective teachers are especially likely to move (or be moved) to subjects and grades not subject to state tests.

What is the status of educational opportunity in rural America?