Mitt Romney has built a seemingly insurmountable lead in the number of convention delegates required to formally clinch the Republican nomination. This August at the Republican National Convention, he will become the first member of the Church of Jesus Christ of Latter-Day Saints (LDS), more commonly known as Mormons, to receive the presidential nomination of a major party.  But as his primary results revealed, he has struggled to generate enthusiasm and support among white, evangelical Christian voters—an important and sizable portion of the Republican voting base.  Many observers have attributed this difficulty at least in part to Romney’s religion. 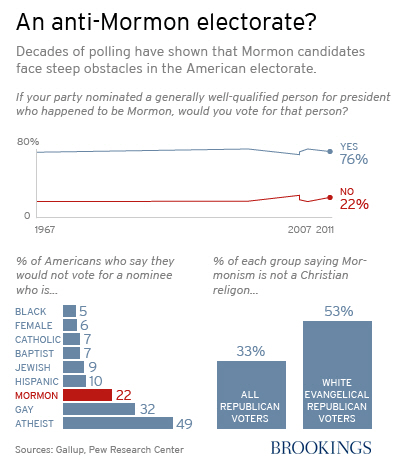 In a new research paper and attitudinal study, Matthew Chingos and Michael Henderson, assistant professor of political science at the University of Mississippi, examine what may happen to Romney’s viability as voters learn more about the LDS church and his affiliation with it over the course of the general election campaign.  Questions explored in the study include: Will Romney’s religion drive a wedge between him and evangelical Christian voters?  Will a general election campaign that informs evangelical Christians about Romney’s religion and emphasizes the differences between the Mormon faith and their own demobilize this segment of potential Republican voters? 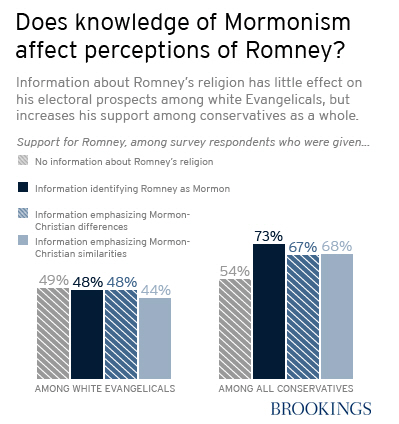 Chingos and Henderson designed a survey experiment that simulated the effect of learning more about Romney’s religion and the beliefs of the Mormon church on political opinions.  This study demonstrates that concerns over Mitt Romney’s “religion problem” have been overblown and quite possibly miss a compelling counter-narrative.  More specifically:

Why Trump is reliant on white evangelicals