There is much debate in economics on the effects of inequality on individual well-being. The lack of consensus on how inequality affects well-being may be due to concerns about relative differences (which economists worry about), to those about absolute differences (which lay people tend to worry about), to transitory changes in the distribution, to long-term differences in opportunities which are transmitted across generations, among other concerns. The average citizen may not notice inequality at all unless there are significant changes in the distribution; these changes could just as easily be at the local community level, firm level, or the national level. 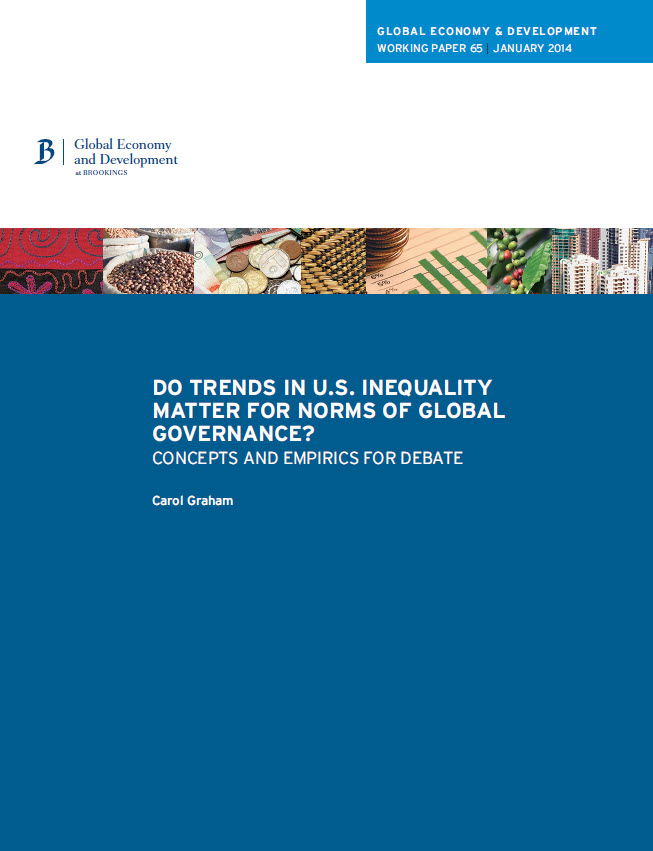 For example, of the many possible channels by which inequality can affect well-being, compare the U.S. on one hand, to Scandinavian countries such as Sweden, Norway and Denmark on the other. Average levels of well-being are slightly higher in the latter set of countries, while average per capita income is slightly higher in the U.S. Inequality could affect well-being in the U.S. simply because there are more people with lower levels of absolute income along with a small number of individuals with incomes that are far above the average. This result would have nothing to do with relative income differences. Alternatively, people may be more bothered by relative income differences than they are by absolute differences, and may thus prefer a stagnant economy with greater levels of equality to a rapidly growing one in which there are larger income differentials. There is some evidence (reviewed in the third section of this paper) that these preferences vary across societies. Finally, both social and political institutions reflect those preferences and play a mediating role: people may be more tolerant of lower average levels of income in contexts wherein safety nets and social welfare benefits are more generous (as in Scandinavia versus in the U.S.).

Meanwhile, what inequality signals to people may differ across countries. In advanced economies, changes are often the result of long-term demographic shifts or of changes in reward structures due to skill-driven growth. In rapidly growing developing countries, some cohorts often benefit before others as their economies modernize and integrate into the larger global economy.

In addition to these conceptual complexities, the metrics that are utilized to measure inequality can make a big difference to the conclusions that are subsequently drawn. For example, conclusions about inequality trends across countries in recent decades depend a great deal on how we account for two very large, fast-growing countries: India and China. Weighting for population size accounts for the dramatic increases in incomes and reductions in poverty in these two countries and, as such, the worldwide distribution of income across countries is converging. However, without population weights and simply treating each country as a single observation regardless of its size, the worldwide distribution of income is diverging. This is due to a number of very small and very poor countries, primarily in sub-Saharan Africa, that are falling well behind the rest of the world.

Within countries, very different conclusions can be drawn about inequality trends, depending on available data. Because the top of the income distribution is typically under-reported, measures of inequality based on household surveys tend to underestimate inequality. Data based on income tax returns are better at capturing trends at the top of the distribution, yet they lack information on the poorest individuals, who do not pay taxes, as well as on the assets of very wealthy individuals. In general, such data are not publicly available in many countries, nor are they always reliable. Another important problem for most countries, including the U.S., is that tax return data only include information on taxable income, thus excluding a great deal of both government transfer benefits (which are often untaxed) and private labor income (health benefits, pension contributions) and capital income (unrealized capital gains). As such, taxable income excludes the possibly important redistributive effects of the tax system itself. Trends for the same country can thus look quite different, depending on the source of data.

Countries also vary a great deal in terms of the generosity of transfer payments, and their metrics of inequality will look very different if these transfers are accounted for (or not). Finally, while most measured inequality is vertical – across individuals over an entire distribution, there are also horizontal inequalities, which are differences in outcomes across individuals within the same education or skill cohort as a result of divergent economic trends. Despite the focus of economists on vertical inequality, horizontal inequality may be what people notice most.

What inequality signals is even more difficult to assess. These signals are possibly more important to individual welfare than are measured trends. In some societies, inequality is a sign of reward for productivity and innovation – “constructive inequality.” In others, it is a sign of persistent advantages for some groups and disadvantage for others – “destructive inequality”. This latter variety creates disincentives for disadvantaged cohorts, who have low prospects of upward mobility, to save and invest in the future.

Several decades ago, Hirschman and Rothschild (1973) wrote a seminal article about what inequality signals, in which they nicely described these two kinds of signals and their potential effects. They compared inequality in the development process to a traffic jam in a tunnel. When one lane of traffic begins to move, it initially gives those in the other lanes reason for hope – a signal that they may also soon move forward. Yet if only that first lane continues to move and the others stay stalled, then the drivers in the stalled lanes become frustrated and engage in dangerous behaviors such as jumping the median strip.

Scholars have begun to distinguish between (and measure) “unfair” and “acceptable” inequalities. The former are due to circumstances beyond an individual’s control, while those due to factors for which people can be held responsible, such as effort, are considered “fair”. These categories capture, roughly, the difference between inequality of opportunities and inequality of outcomes. Behavioral economists have demonstrated that notions of fairness and justice affect individual choices, and find significant deviations from the behaviors predicted by models based on the assumption of purely self-interested preferences.

Meanwhile, perceptions about inequality are not always in line with actual trends – in part because most metrics of inequality are fairly intractable for the average lay person, and in part because of the lack of distinction that is made between trends in relative versus absolute inequality. The U.S., for example, now has the highest level of inequality among OECD economies, with the exception of Mexico. And its mobility rates rank among the lowest in this group (at least among those countries for which we have good longitudinal data). However, these trends coexist with a persistent public perception of inequality as a reward for individual effort in a context of exceptional rates of income mobility. While that perception may have been shaken slightly by the 2009 financial crisis, as evidenced by the Occupy Wall Street movements at the time, there is no consistent evidence suggesting that there have been major changes in overall public attitudes toward inequality. Latin America, by contrast, has historically had much lower rates of mobility than the U.S. Yet mobility rates in the region have increased over the past two decades while poverty has fallen markedly; even inequality has been reduced in several key Latin American countries. (See Lustig, Pessino and Scott, 2013).7 Still, the public maintains a perception of inequality as a sign of persistent advantage for the wealthy and disadvantage for the poor in that region.

Since the financial crisis in the U.S., inequality has just begun to enter the public debate as a serious issue. However, even now, concerns (or the lack thereof) are very much divided along ideological lines. Some scholars highlight the corrosive effects of inequality in a range of areas, including concentration of political power, the increased prevalence of poverty, linkages to increased macroeconomic instability and increasing expenditure on “positional” goods. Critics continue to label concerns about inequality as politically driven and a masked attempt to increase taxes on the wealthy. Polarization on the issue is one of the many features of the divided political debate in the U.S.

This paper will review U.S. inequality trends of the past few decades, compared to those in other OECD countries, and juxtapose those trends against the data on inequality and reported well-being for select countries around the world. The 2009 financial crisis was a very visible demonstration of how trends in the world’s largest economy can have vast spillover effects in an increasingly integrated global economy. It is plausible – although far from established – that the effects of inequality on individual well-being, on economic incentives, and on social and political coherence in the U.S. could have implications well beyond its borders. The author is not an expert in global governance questions. Rather, the aim of this paper is to identify the conceptual and empirical linkages between inequality, well-being and related phenomena which reflect norms of equity and social justice (such as attitudes about redistribution). Hopefully, it can serve as a basis for discussion of the possible implications for global governance by those who are.