In recent decades, the diffusion of digital technology into nearly every business and workplace, also known as “digitalization,” has been remaking the U.S. economy and the world of work. The “digitalization of everything” has at once increased the potential of individuals, firms, and society while also contributing to a series of troublesome impacts and inequalities, such as worker pay disparities across many demographics, and the divergence of metropolitan economic outcomes.

In light of that, this report presents a detailed analysis of changes in the digital content of 545 occupations covering 90 percent of the U.S. workforce in all industries since 2001. The analysis categorizes U.S. occupations into jobs that require high, medium or low digital skills and tracks the impacts of rapid change.

The full report concludes with implications of the key findings and suggests ways communities can work with firms and workers to spread the benefits of digitalization while mitigating its potentially harmful effects. Read about the report’s primary recommendations on page 38 »

The U.S. economy is digitalizing at an extremely rapid pace. 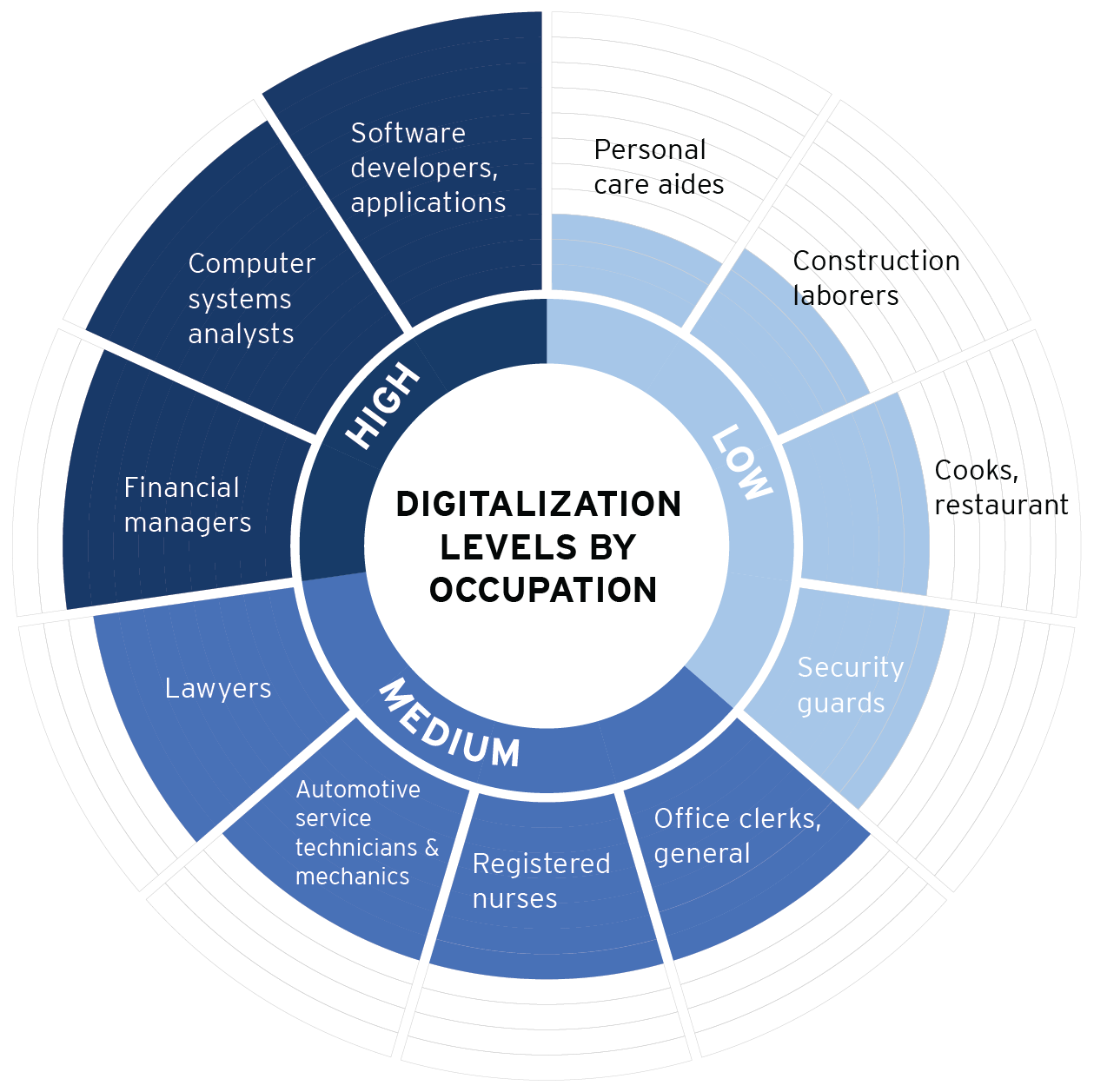 Between 2002 and 2016, the shares of U.S. jobs that require substantial digital knowledge rose rapidly, mostly due to large changes in the digital content of existing occupations. Read more about the changing U.S. workforce on page 15 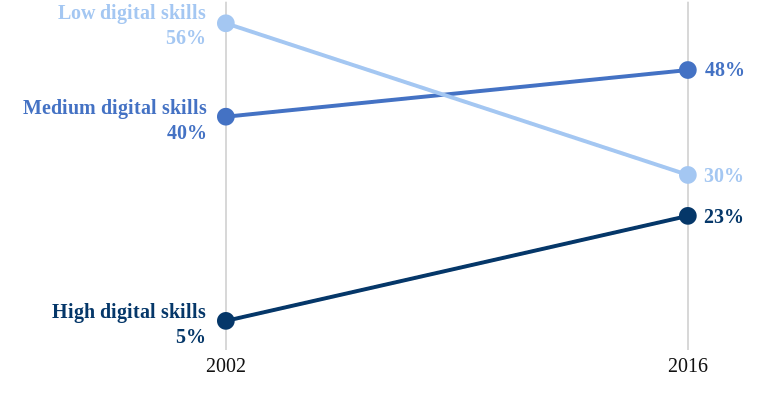 The degree and pace of change of digitalization varies widely among occupations and across industries.

Additionally, virtually all industry groups saw their mean digital scores increase from 2002 to 2016, though the degree and speed of digital adoption varies significantly. Leading the digitalization race is a group of broad service sectors, including professional, scientific and technical services (55); media (52); and finance and insurance (55). On the lower end, education, transportation and warehousing, basic goods manufacturing, and construction have scores mostly in the 30s. Read more about the changing digital scores of diverse industries on page 17

Digitalization is associated with increased pay and job resiliency in the face of automation but also vastly uneven trends for job growth and wages. Sharp gender- and race-based challenges also exist.

Between 2010 and 2016, occupations with high-level digital scores on average registered more than 0.8 percent wage growth annually, compared to middle-level annual wage growth of 0.3 percent, versus annual wage declines of 0.2 percent for low-level occupations. Read more about the correlation between digitalization and wage growth on page 24

Women, with slightly higher aggregate digital scores (48) than men (45), represent about three-quarters of the workforce in many of the largest medium-digital occupational groups, such as health care, office administration, and education. Conversely, men continue to dominate the highest-level digital occupations, such as computer, engineering and management fields, as well as lower-digital occupations such as transportation, construction, natural resources, and building and grounds occupations. Read more about the correlation between digitalization and gender on page 35

Digitalization is happening everywhere, but its progress varies widely across the map. In this regard, while localities’ mean digital scores are converging, their shares of highly digital workers are diverging. As such, states’ and metros’ mean digital scores and shares of highly digital workers are correlated with significant wage variations at the state and local levels. Read more about the variance in regional digital performance on page 27

Where the robots are