In November 2012, Colorado voters decided to experiment with marijuana, passing a constitutional amendment legalizing recreational cannabis. It was a bold move, but it also required quick, bold, and unprecedented action on the part of the state government to implement the policy. Colorado needed to set up a legal, regulatory, and tax system so that product would be available in dispensaries by January 1, 2014. As part of an examination of Colorado’s implementation and rollout, Brookings’ John Hudak spent a week in Denver interviewing elected officials, regulators, industry officials, and others playing a variety of roles and including supporters and opponents of legalization policy.

Hudak reports that the state of Colorado has largely succeeded in rolling out a legal marijuana system, and its early implementation efforts have been impressive. This report details what has been successful, how Colorado has achieved an effective rollout, and what challenges remain. Below are a few highlights. 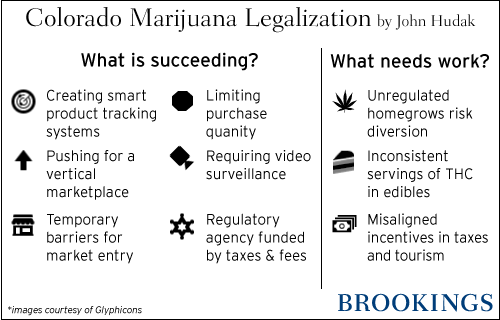 An easy fix could give the marijuana industry access to banking

What the White House doesn’t know about marijuana policy