A peer-reviewed version of this paper appears in the November 2012 edition of Energy Economics and is available for download through ScienceDirect.com (pdf).

“We’re in a competition all around the world, and other countries — Germany, China, South Korea — they know that clean energy technology is what is going to help spur job creation and economic growth for years to come. And that’s why we’ve got to make sure that we win that competition. I don’t want the new breakthrough technologies and the new manufacturing taking place in China and India. I want all those new jobs right here … in the United States of America, with American workers, American know-how, American ingenuity.”

Governments in most industrial countries have stepped up their promotion of clean energy technology in recent years. No longer a laggard, the U.S. government increased energy subsidies from $17.9 billion in fiscal year (FY) 2007 to $37.2 billion in FY 2010, according to the U.S. Energy Information Administration (EIA).[1] The total includes a mix of direct expenditures, tax expenditures, the subsidy associated with loan guarantees, and research, development and deployment (RD&D) spending.

The Energy Improvement and Extension Act (EIEA), passed in late 2008, and the American Recovery and Reinvestment Act of 2009 (ARRA) account for much of the increase. The EIEA expanded or extended tax credits for renewable energy, energy-efficient appliances, plug-in electric vehicles, and liquid biofuels. ARRA, a broad fiscal stimulus package, included $35.2 billion to the Department of Energy (DOE) and added $21 billion in energy tax incentives over the life of the legislation.[2] Using ARRA authority, cumulatively from September 2009 through November 2011, DOE underwrote $35.9 billion in loan guarantees for a range of energy-related technologies.[3]

Figure 1 displays the U.S. spending stream on energy-related research and development since 1974. The graph shows the dramatic impact of the ARRA package. 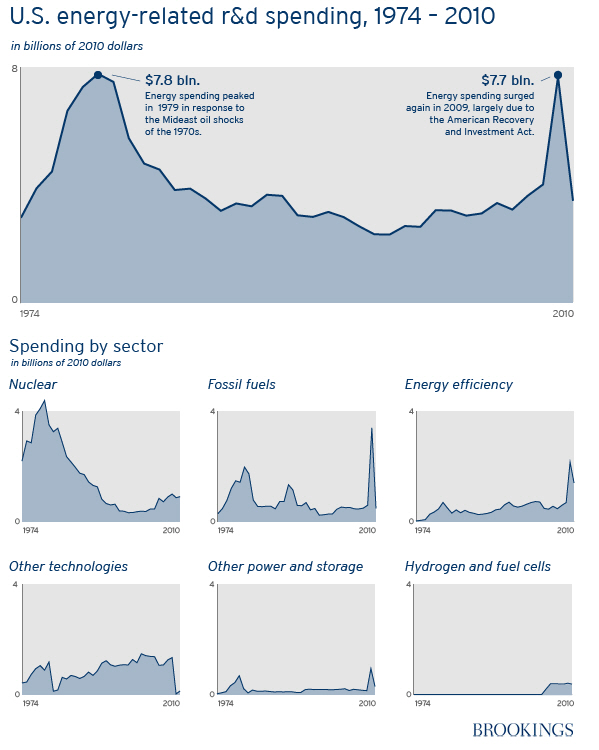 Public investments of these magnitudes, targeted at specific industries, arguably constitute an industrial policy, albeit a sectoral one, unlike the earlier proposals of the 1980’s —that is, a government strategy to steer resources toward select producers or technologies. The rationale and efficacy of these clean-energy expenditures call for scrutiny.

Proponents offer numerous reasons for scaling up particular energy technologies at the taxpayer’s expense. One set of reasons involves the need to remediate market failures that have not been corrected by other policies. For example, clean-energy technologies are said to emit fewer greenhouse gases than do traditional sources per unit of energy produced. The United States does not have an economy-wide policy to control greenhouse gases, most notably, one that puts a price on CO2 that reflects the environmental harm associated with use of fossil fuels.

A far more effective policy than subsidies for clean energy research, development and demonstration would be a tax or a cap-and-trade regime that would put an appropriate price on carbon and other greenhouse gases.[5] Properly implemented, this alternative approach would help level the playing field for greener energy sources, for it would require emitters to pay prices that reflect the costs their emissions impose on society. The enhanced efficiency that would result has been widely recognized by economists.[6] True costs would flow to purchasers of goods and services that require energy, suitably inducing conservation. Emitters would have incentives to invest in equipment and new production techniques, use alternative fuels, and seek other methods to reduce emissions. And America’s innovators would channel their efforts into inventing, scaling up, and marketing competitive forms of clean energy. However, because existing market signals do not suffice to encourage climate-friendly technologies, carefully targeted federal funding seems warranted. But as we explain later, it is ironically only after incorporating the social costs of energy into market prices that many clean energy subsidies will succeed in deploying new technologies.

Some clean energy technologies, such as electric vehicles and biofuels, are also said to wean the economy from its inordinate dependence on oil, which is both volatile in price and supplied in part from unstable foreign sources. Like environmental damage, the security risks of relying on oil are not fully embedded in its price, and therefore, the argument goes, policies to reduce its use could be efficiency-enhancing.

A second set of reasons for sustaining clean-energy subsidies is less about correcting inefficient market outcomes than about tilting the market toward U.S. interests. In this view, strategic investments in clean energy technologies would increase U.S. firms’ market share of a growing industry and thus help American firms and workers win a larger portion of global business. Although the projected market growth of cleaner energy derives from the international community’s efforts to protect the environment, the objective here is economic. Proponents imply that capturing a larger market share would boost long-term U.S. “competitiveness” and create jobs in American firms that manufacture the exportable products.

Are these justifications sound? And even if convincing in theory, what happens in practice? That is, can the American political process successfully carry out the envisioned strategy? Section 2 of this paper reviews the history of industrial and energy technology policy since the 1970s. Section 3 examines the environmental and energy- independence rationales, and Section 4 analyzes claims about the potential role for government backing of clean energy to ensure U.S. competitiveness and save or create jobs. Section 5 explores the administrative and political challenges of implementing an efficient clean-energy research and development portfolio, and Section 6 sketches our recommendations.

[2] $11 billion went to grants to state and local governments for weatherization and other programs and $600 million in new research funding.

[3] U.S. Department of Energy (DOE), Loan Programs Office website, accessed November 29, 2011. https://lpo.energy.gov/?page_id=45. The overall value of loans guaranteed by DOE is much larger than the appropriations necessary to account for the value of the subsidized interest rate on the guaranteed loan.

[5] A carbon tax and a cap-and-trade program are theoretically very similar. We favor a carbon tax based on our assessment of the likely actual implementation.