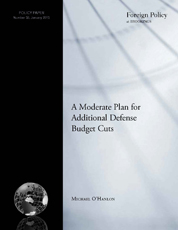 In this Brookings Foreign Policy paper, Michael O’Hanlon suggests how the Pentagon might cut certain weapons, forces, and other capabilities that would cumulatively save up to $200 billion over ten years.

These savings would be greater than those assumed by the Pentagon in 2012. But they would be much less than those implied by possible sequestration or the Simpson-Bowles deficit reduction commission. O’Hanlon believes his moderate plan for defense cuts, while itself difficult to implement, is feasible within the basic national security strategy of the United States today—a strategy he supports. However, deeper cuts would require more fundamental changes to that strategy, and greater risks to national security. For these reasons, O’Hanlon argues against sequestration, or any other plan implying similar cuts to the ten-year defense plan. The ideas in this paper will be further developed in a forthcoming Brookings book by O’Hanlon later this spring.

The new geopolitics of fragility: Russia, China, and the mounting challenge for peacebuilding

Repackaging Pandora: How Russia’s information apparatus is handling a massive leak of data on offshore finance