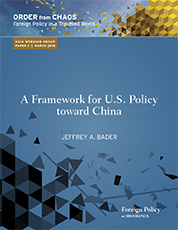 Serious people understand that the manner in which the United States deals with China will be a critical, if not the critical, overseas challenge for the United States in the 21st century. But how should we deal with China? What policy framework best optimizes U.S. interests, which are multiple and not always consistent with each other?

By examining China’s goals, what China is not doing, and its contributions to global prosperity, Jeffrey Bader outlines three broad policy options for the United States to respond to the China challenge:

Options 1 and 2 have their prominent advocates in the current policy literature, but each would jeopardize important U.S. interests—the former by putting at risk U.S. allies and values, the latter by demanding a greatly expanded U.S. military presence in the region without ensuring greater security. So what kind of actions should the United States take to achieve a balance between acceptance of a larger global role for a constructive China while drawing lines against coercion in China’s neighborhood? On global issues, a sensible option 3 approach should look for issues on which China, because of its own evolving interests, can and should play a greater role in supporting the global system. A few examples might include:

In addition, there are political, economic, and security measures the United States should adopt, globally and regionally, to protect its interests in the face of the Chinese challenge, including projecting clarity about our commitments to allies, defending principles and international norms in maritime areas, and restricting access to the U.S. market for companies that engage in cyber-theft. But there are opportunities as well for U.S.-China cooperation, such as along with South Korea in constraining the North Korean nuclear weapons program and with the Chinese-sponsored Asian Infrastructure Investment Bank on worthwhile projects.

Two years on from the ceasefire agreement, Libya still matters