“So let’s start and build a House that works for the people, because this is the people’s House.” —Greg Walden (R-Ore.)

Even the most avid Congress watchers probably have a hard time recognizing Greg Walton (R-Ohio), the head of the House Republicans’ transition team. But most veteran observers of Congress would recognize his call to build a more open and bipartisan House. In preparing to take up their new gavels, Newt Gingrich, Nancy Pelosi, and now John Boehner each committed their majorities to transforming the operations of the House. Newt Gingrich called 15 years ago for a “far more open, far more participatory” House. Nancy Pelosi promised “to make this the most honest and open Congress in history.” And Speaker-to-be John Boehner has called for “fair debate and a fair vote.”

Why is the People’s House in such disrepair and why has every recent Speaker called for its procedural makeover? Over the past three decades, each majority party has increasingly turned the thumbscrews on the minority party. In the 1970s, bills typically came to the floor with ample opportunity for amendment and debate by majority and minority party alike. In the most recent congresses, almost every major bill is considered under exceedingly restrictive rules, rarely allowing members of the minority to amend the majority’s handiwork. In today’s polarized Congress, it is the minority party that pays the steepest price under restrictive rules, as their policy views are seldom represented in the bills the majority seeks to protect on the House floor.

There is nothing inherently pernicious about the occasional use of restrictive rules. Carefully negotiated tax packages, for instance, have historically come to the floor under rules that prohibit amendments. Party and committee leaders simply do not want to see their laboriously crafted compromises undone on the floor. But the use of restrictive rules has become ubiquitous in the House. It is inconceivable today that the majority party would allow an important bill to come to the House floor open to serious amendment by the minority party. Only when the majority thinks it has the votes to defeat an amendment is it likely to grant its proponents a roll call vote on the amendment. Not only do majority leaders fear amendments that challenge their party’s policy priorities, they also want to protect their members from casting embarrassing votes on politically-inspired matters. Take for example, the House GOP’s amendment a few months ago that would have sent an energy bill back to committee (thus killing the bill). The amendment would have required contractors to ensure that no employee had been convicted of child molestation. Vote for the amendment, and Democrats would kill their own bill. Vote against the amendment, and Democrats would become fodder for campaign ads accusing them of supporting child molesters. If you were the majority leader, what would you do? No wonder majorities prefer to limit participation whenever they have the votes to craft restrictive rules.

Given the minority’s willingness to exploit floor amendments for both policy and partisan purpose, we probably should not be surprised by how often majorities have turned to restrictive rules that prevent the minority party from meaningfully participating in the legislative process. As seen in the figure below, the trend line for the use of restrictive rules climbs steadily over the past couple of decades: 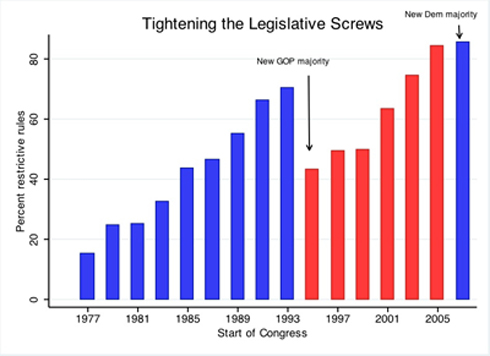 But note the marked drop off in the use of restrictive rules with the arrival of Gingrich and the new Republican majority in 1995. The fall off in restrictive rules reflects Republicans’ effort to follow through on their campaign commitment to open up the legislative process on the floor. It is hard to know whether Republicans truly believed in the value of participation or whether they felt compelled politically to live up to their electoral promises. Probably both. Regardless, the party’s enthusiasm for full and open debate lasted just a short while. Soon thereafter, with shrunken majorities and rising partisanship, House Republicans reverted to the restrictive practices of their Democratic predecessors. Matters did not improve when Democrats regained control of the House. Although Speaker Pelosi pledged an open and fair House floor upon taking up the Speaker’s gavel in 2007, Democrats brought all of their “Six for ‘06” priority issues to the House floor under restrictive rules.

Why do Speakers renege on their procedural promises? Majority leaders—sooner or later—must decide whether procedural principles or party goals are more important. Sometimes the two are compatible, such as when new majorities take control of the chamber and feel that their party’s reputation demands that they live up to their campaign promises. But most times, procedural principles and policy goals are at loggerheads, particularly in a period of competitive and polarized parties. Fair and open debate may put the majority’s agenda at risk. Faced with that choice, majorities opt to suppress the rights of the minority.

What then should we expect from a Republican House? At the beginning at least, I suspect we’ll see a good faith effort to limit the use of restrictive rules on some big bills such as appropriations measures—so long as the majority thinks it can contain the damage that might be caused by giving the minority (and the GOP’s own Tea Partiers) a chance to participate. But once openness threatens to undermine the Republican message and policy aims, expect the new majority to tighten the screws in increasingly creative ways. Renovation of the People’s House will have to wait for more hospitable times.