Income and wealth inequality seem to be growing fastest at the top of the distribution. “Top” may not be specific enough. The real action is at the tip-top, or the tippetty-tip-top. Think not the 1% but the 0.1% or even 0.01%.

The stretch in the income distribution at the very top is fairly well established, and a new study suggests that similar trends may apply to wealth too. Using a “capitalization” measurement approach—essentially, estimating wealth indirectly by using capital gains as declared to the IRS—Emmanuel Saez and Gabriel Zucman find that families closest to the top of the wealth distribution have seen the biggest increase in their share of the nation’s wealth. Trends in the wealth shares of the different slices within the tiny slice that is the 1% diverge quite sharply: 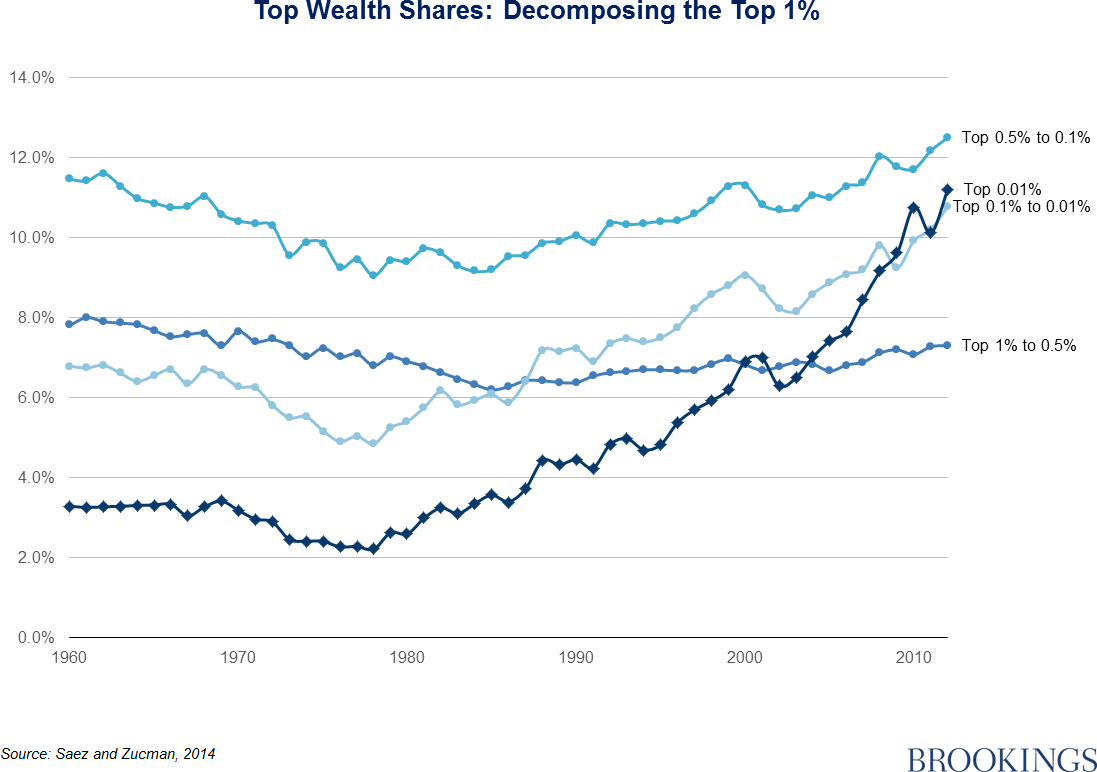 We don’t know for sure if Mr. Saez and Mr. Zucman are right: Debate in the economics world about trends in wealth concentration is long-running. Different measures produce quite different results. If they are right, does it matter? Economically, it might, if some of the very large gains at the very top represent rent-seeking behavior. But we are a long way from establishing that.

The problem might be political rather than economic. The soar-away wealth of those at the pinnacle of the distribution can start to make the people just below them feel distinctly middle-class. I’ve just played the part of Straight Man Scholar in a sketch on “The Daily Show” poking fun at the struggles of those only just scraping into the top 1% with a family wealth of $4 million or more. Correspondent Hasan Minhaj became a faux class warrior on behalf of those struggling to get by with just one or two homes and, rather than having their own private jet, having to share one with others. I told him that he was worrying, in effect, about the “Net Jet Poor.” (For those wondering, the entry-level option in a Hawker 400XP jet is 25 hours of flight time a year, for a mere $119,900.) 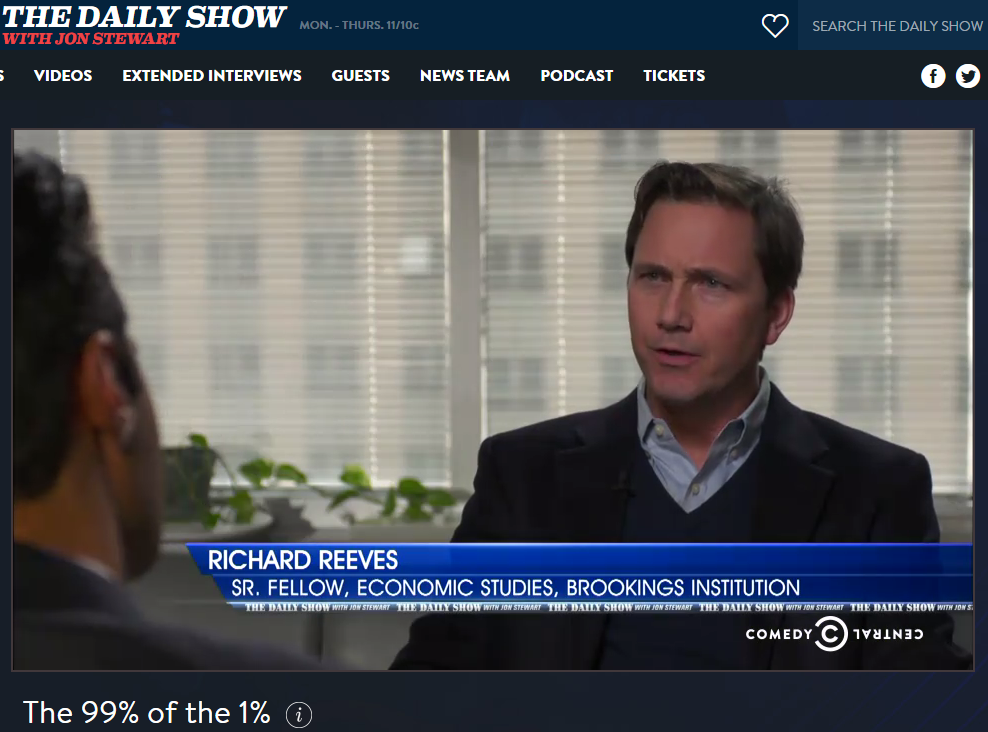 Behind the jokes lies a potentially serious problem. Most people think the rich should pay more taxes. Half of Americans think the government should redistribute wealth by “heavy taxes on the rich” according to Roper analysis of Gallup data. But few admit to being rich. Just 1% of Americans describe themselves as “upper class,”as opposed to “upper middle class”or some other category, in a Pew survey.

Wealth, like poverty, is relative. Surveys show that the economic definition of “rich” varies by the financial situation: Almost half (46%) of those making more than $100,000 a year think you need at least $500,000 a year to count as “rich,” compared with 18% of those bringing in less than $30,000 a year, according to a Roper analysis undertaken at my request: 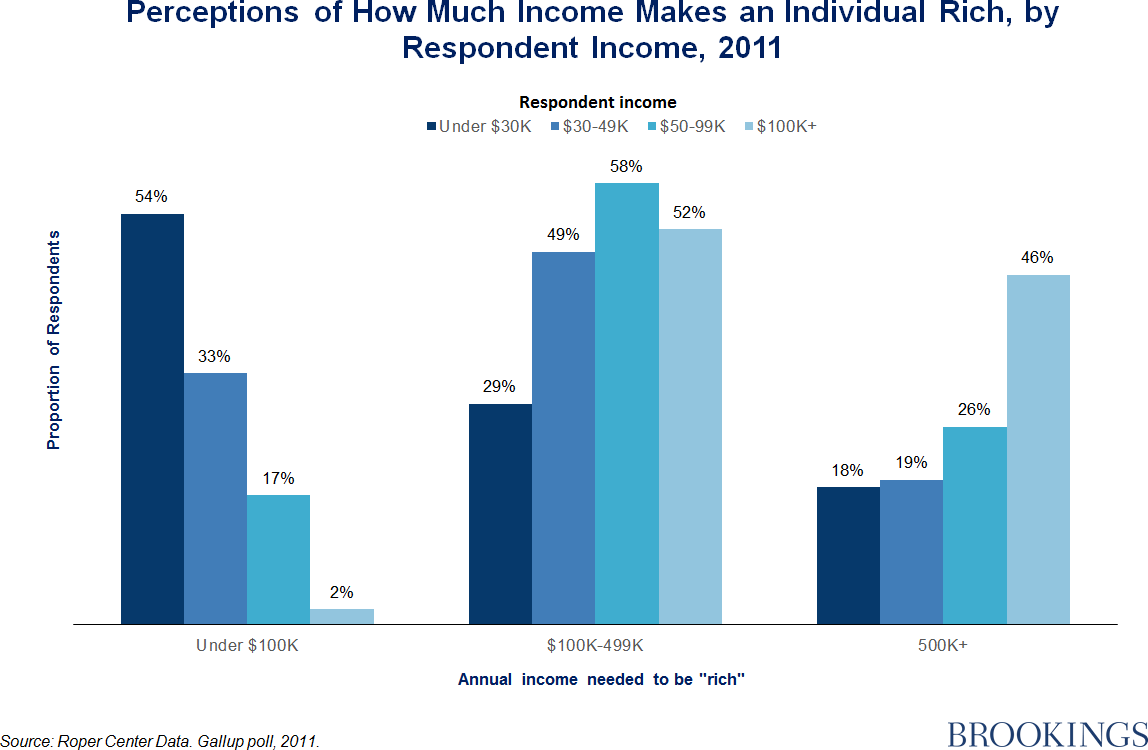 The “Me? I’m not rich!” problem extends further down the ladder. President Barack Obama’s proposed removal of tax breaks on savings plans for college was derailed even before congressional Republicans could stop it, primarily by liberal Democrats representing affluent districts. Their fear, well-founded given the reaction, was that those in the top income bracket—to whom most of the benefits of 529 college savings plans flow—would not consider themselves rich enough to be expected to pay higher taxes.

So long as people who are rich by any reasonable definition are able to convince themselves that the label applies only to those even higher up the ladder, and who appear to be rising even higher, the prospects for greater equity in the tax system will remain bleak.