Last week from December 8-9, the European Council met to develop strategies to restore the credibility of the euro. During the meeting, 26 member states pledged to accelerate economic and financial integration and adopt a credible and transparent surveillance system. While a clear strategy for implementation of this agreement will take time to develop, it is clear is that the euro will continue to exist as a currency. Nonetheless, until such an implementation strategy is adopted, the eurozone crisis presents a lingering threat to global economic growth in 2012.

For a few countries, however, the crisis might also provide opportunity. Under the right conditions, Africa’s Communauté Financière Africaine (CFA) franc zone could yield positive dividends as a result of the crisis and the weakening of the euro. Between July 2008 and December 2011 the euro depreciated by over 14 percent against the U.S. dollar. During the same period, the euro depreciated 20 percent against the Chinese yuan renminbi. For the 14 CFA franc zone countries whose currency is pegged to the euro, this means an instant improvement in competitiveness. These countries can build on the gains in competitiveness resulting from this depreciation to create conditions for stronger export growth.

Since the CFA franc is pegged to the euro, its depreciation should lead to increased competitiveness of CFA zone exports to the U.S., China and other regions. In 2010, about 41 percent of all exports from CFA countries went to the U.S. (27 percent) and China (14 percent). In order to maximize the potential export gains from a depreciated euro, these countries will need to implement a series of market reforms to improve their export competitiveness. In fact, if CFA countries fail to reform their labor markets as well as the overall business and trade environment, they will miss an opportunity to increase their export competitiveness. Furthermore, they may be worse off after the crisis if the euro begins to appreciate or EU market demand switches to more competitive markets for its intermediary inputs. Reaping the eurozone crisis dividend will require active cost and policy adjustments on the part of CFA zone countries. 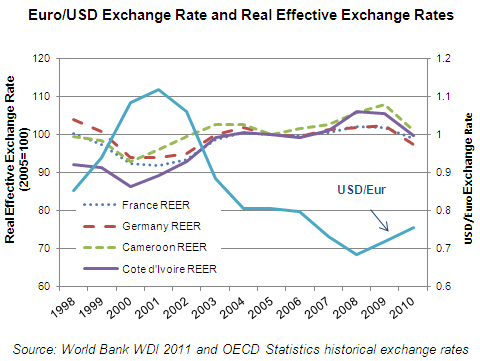 The eurozone crisis will have a varied impact on the Economic and Monetary Community of Central Africa (CEMAC) and the West African Economic and Monetary Union (WAEMU) countries – the two communities that together form the CFA franc zone. CEMAC countries, which are mostly oil exporters, stand to benefit the most from the crisis dividend. In WAEMU countries there is increasing concern that the depreciation of the euro will make food and fuel imports more expensive, which is also a concern in CEMAC countries but to a lesser extent. While concerns about high import bills are valid, both regions could offset these costs with increased exports and subsequent increases in foreign currency reserves. However, this requires a concerted ‘export push’ on the part of CFA zone governments.

Although the EU is the main trading partner for CFA zone countries and it accounts for 34 percent of all exports from the CFA zone in 2010, its relative share of exports from the region has declined over the past decade, a sign that countries are diversifying into new markets. This is especially true in Senegal where the share of exports to the EU fell from 71 percent in 1995 to 36 percent in 2007. Since much of the past export gains in the CFA zone have been due to demand effects, the depreciation of euro could help to increase the competitiveness effects relative to the demand effects. However, this must be supported by strengthening the region’s labor markets, trade environment and governance institutions.

A key area of focus for CFA zone countries should be on improving labor market flexibility. While CFA countries have an abundant supply of labor, rigid labor market policies and regulations contribute to increasing costs of doing business in the region. On average, it is much more difficult to hire workers in CFA zone countries than in the BRICs (Brazil, Russia, India, China and South Africa), with a difficulty of hiring index of 53.6 compared with 35.6 respectively. Furthermore, labor markets in CFA zone countries are much more rigid than their counterparts in the BRICs, with CFA zone countries having on average a higher rigidity of working hours index and rigidity of employment index.[1] Firing costs in CFA countries appear to be within the same range as the BRICs; however, there is significant variation across countries. For example, it can cost as much as 133 weeks of salary to fire a worker in Equatorial Guinea. There is a growing body of research that suggests rigidities in the labor market discourage firms from exporting. Therefore, it is important that CFA zone countries make it easier for firms to hire workers and allow companies some flexibility in setting employment hours and employment contract terms. 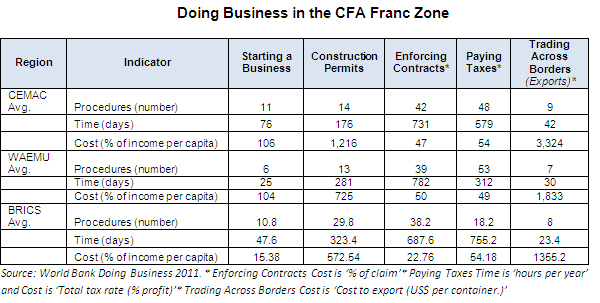 There are a number of other high transaction costs that severely undermine the competitiveness of CFA zone exports. On average, it costs between 104 to 106 percent of the national income per capita to start a business in the CFA zone, with the costs almost doubling in Chad at 208 percent of income per capita. It is important to note that the averages presented in the table above mask serious disparities in the region. While it typically takes only 25 days to start a business in WAEMU countries and 76 days to start a business in CEMAC countries, starting a business takes only 5 days in Senegal and over 160 days in Republic of the Congo. Overall, it takes 7 to 19 more days to export goods from the CFA zone countries than from the BRICs, and export processing times range from just 11 days in Senegal to 75 days in Chad. It costs almost two and a half times more to export goods from the CEMAC franc zone countries than from the BRICs, $3,324 per container compared with just $1,355 per container respectively. While it is less costly to export goods from WAEMU franc zone countries, it still costs $478 more to ship a container from WAEMU countries than from the BRICs. In addition, average customs transactions in the CFA zone involve 20 to 30 different parties and about 40 different documents.

The scope to expand exports of existing products to new markets is vast and can play a major role in export growth in the CFA zone. The index of export market penetration (IEMP) shows that on average, exports from African countries only reach about 5 percent of available markets, indicating an enormous gap between potential markets and exploited markets. Breaking into new markets could provide a significant boost to the CFA zone’s trade performance and CFA zone countries should look at the U.S. as a potential new market for its goods. Trade preferences such as the African Growth and Opportunity Act, coupled with a depreciating euro would make CFA zone exports quite competitive in the U.S. market, even in the face of competition from Asia and Latin America.

Finally governments in the CFA zone need to improve the governance environment in their countries. With a few exceptions, Mali and Benin, CFA zone countries scored in less than the 50th percentile on all six performance measures in the 2010 Worldwide Governance Indicators. Governments in the region continue to underperform on measures of government effectiveness, control of corruption, regulatory quality, rule of law, voice and accountability, and political stability. Similarly, only four countries in the CFA franc zone, Benin (11), Senegal (15), Burkina Faso (19), and Mali (22), ranked in the top half of the 2011 Ibrahim Index of African Governance. CFA zone countries will only reap the crisis dividend if they anchor these benefits to structural reforms to reduce export costs, improve labor market flexibility, and build strong governance institutions. CFA zone countries should prioritize these reforms in the short run as part of their ‘export push.’ For lasting benefits, however, these reforms must be coupled with long standing efforts to improve infrastructure in the region.

[1] This index measures the regulation of employment, specifically the hiring and firing of workers and the rigidity of working hours.