As the Post noted in passing, the swing from cash surpluses to cash deficits was not exactly news. More than a quarter century ago the Social Security Actuary predicted that tax revenues flowing into Social Security would fall short of expected benefit payments in the middle of this decade. An unexpected and protracted slump has hurt jobs and wages, cutting payroll tax revenues below levels predicted as recently as four years ago. The slump also spurred some workers to file claims for early pensions, boosting annual outlays. The inevitable result: Social Security went from cash surpluses to cash deficits five years earlier than expected.

Nonspecialist readers and even budget mavens may have drawn a frightening, but incorrect, conclusion from the Post story. Even if the Social Security program is “cash negative,” it does not face an imminent funding problem. In fact, the total revenue flowing into the Trust Fund, including investment income on its reserves, is still comfortably larger than annual outlays on benefits and administration. The Trust Fund is currently growing, and it is expected to keep growing through 2022. In that year the combined Social Security Trust Funds will hold almost $3.7 trillion in reserves, enough to fund operations for about 2½ more years, even if tax payments and investment income should completely cease. (Of course, they won’t.)

“Cash negative” does not mean “insolvent” or “depleted of funds.” It means that one source of annual Social Security income – tax contributions – is lower than total program spending (benefit payments plus administrative costs). Social Security, like other pension funds, has another source of income, however. That income source is investment earnings, the money the Trust Fund earns on its reserves. When investment income is added to new contributions, the total revenues of Social Security are greater than its annual outlays, and this will continue to be true for more than a decade.

Readers of the Post story who worry about Social Security’s “cash negative” position may not realize that “cash negative” is the normal situation of the nation’s private pension system. According to statistics published by the Labor Department’s Employment Benefits Security Administration, the private pension system has been “cash negative” in 23 out of the last 24 years (see Chart 1). That is, in 23 recent years the annual disbursements of private pension plans were greater than the combined contributions the plans received from employers and employees. The shortfall of contributions compared to disbursements occurred every year between 1985 and 2008 except in 2003, when there was a small cash surplus. (The Labor Department’s statistics are based on tax reports, which take several years to process. The most recent information covers 2008.)

Between 1985 and 2008 contributions to the private pension system fell short of benefit payments and administrative costs by $0.85 trillion. In those same years, the largest Social Security Trust Fund, the one for Old-Age and Survivors Insurance (OASI), was never “cash negative.” It collected $1.13 trillion more in contributions than it spent on benefit payments and administration. If being “cash negative” is a symptom of impending collapse, it is the private pension system, not Social Security, which should be the topic of urgent national debate.

The private pension system is nowhere near collapse, though many old-fashioned, defined-benefit plans are clearly struggling. In fact, between 1985 and 2008 the private pension system added $3.66 trillion to its reserves, even though it was “cash negative” in all but one of those years (see Chart 2). How was this possible? Over that same span of years private pension plans earned a total of $4.5 trillion in investment income. Part of the investment income was used to finance benefit payments plus the cost of administering the plans, and the remainder was added to pension reserves.

Social Security certainly faces a funding problem. It is not, however, an immediate problem nor is it an issue Congress must deal with in the next 5 or 10 years. There is an important advantage to addressing the long-term problem sooner rather than later, however. The longer we wait to decide how to deal with the funding shortfall, the more dramatic the short-term adjustments needed to eliminate the shortfall. For example, if Congress takes no steps to adjust Social Security taxes, eligibility, or pension formulas between now and 2036, benefits will have to fall 23% in 2037. When the Trust Fund is depleted, benefit payments must be financed with current tax revenues, and those will be enough to cover only 77% of the benefits promised by today’s pension formula. Of course, voters and policymakers may eventually decide that the best solution to the funding problem is to trim pensions across the board by 23%. But in the very unlikely event this turns out to be true, it would be far better to give workers and pensioners several years and preferably several decades to prepare for such a big benefit cut.

We should deal with Social Security’s funding problem, and the sooner we do so the better for public confidence in the system. The desirability of reform does not excuse sloppy analysis, however. Contrary to a widespread view, the interest income on Social Security reserves provides a tangible source of funding for current and future benefits, exactly as is the case in a private pension plan. The “cash balance” of Social Security may be helpful for thinking about overall federal budget balance, but it does not offer a reliable gauge of the current or future sustainability of Social Security pensions. Social Security has been “cash negative” in many past years when benefits were secure and public confidence in them was high. When the reserves of the system are large, as they are today, benefits can be paid many years into the future, even if the program is “cash negative” during most of those years. If that seems hard to believe, remember the nation’s private pension plans. They have been “cash negative” for 23 of the past 24 years, and their reserves have continued to grow. I am still waiting to read the front-page story warning me private pensions are careening toward the abyss. 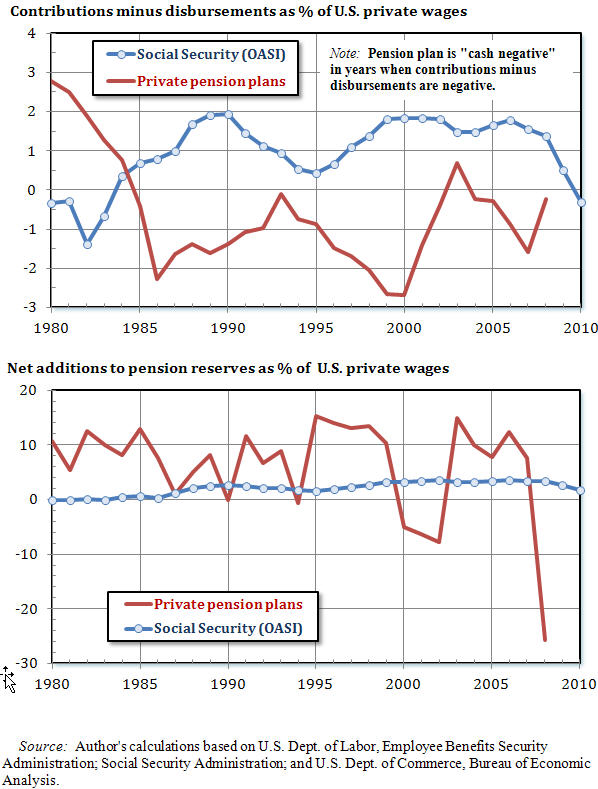 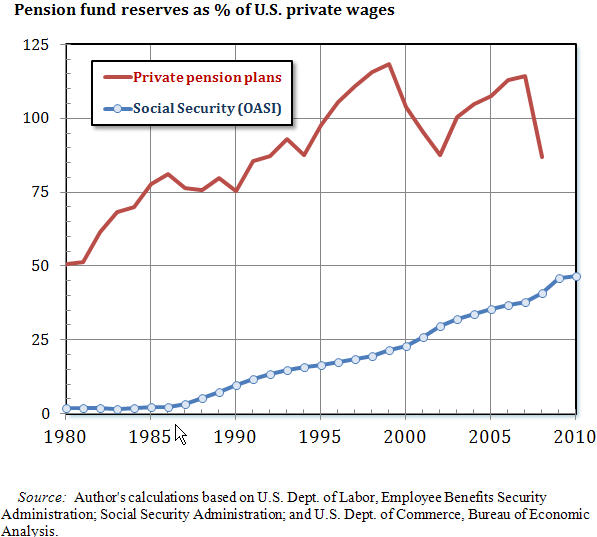 Generational war over the budget? Hard to see it in the numbers