In 1990, almost 600 million people lived on less than $5 a day in resource-rich countries. Today, it is estimated that poverty has increased to about 700 million people. Among this population, close to 300 million live in dire poverty, surviving on $2 a day or less. The majority of the poor in resource-rich countries live in Africa, where 80 percent of citizens in extractive-intensive countries live on under $5 a day, and over 50 percent live on under $2 a day.

In many countries the failure to harness natural resource wealth towards national well-being is in large measure linked to a failure of national governance. Of the hundreds of millions of citizens living on under $2 a day in resource-rich nations, 85 percent live in very poorly governed countries – countries which, according to the updated Worldwide Governance Indicators (WGI), rate very poorly in corruption control and other governance dimensions.

The WGI organize and synthesize data reflecting the views and reports of tens of thousands of stakeholders worldwide, including respondents to household and firm surveys and experts from nongovernmental organizations, public sector agencies and providers of commercial business information. The newest WGI dataset being released is based on dozens of different data sources from over 30 organizations around the world, and aggregates the data from hundreds of disaggregated questions. The indicators cover over 200 countries between the mid-1990s and the present, thus also allowing observers to monitor country trends.

Governance has political, economic and institutional dimensions. The WGI project defines governance as the traditions and institutions by which authority in a country is exercised. This includes how governments are selected, monitored and replaced; the government’s capacity to effectively formulate and implement sound policies and provide public services; and the respect of citizens and the state for the institutions that govern economic and social interactions among them. This definition drives the six core indicators of governance measured by the WGI:

1. Voice and Accountability: captures perceptions of the extent to which a country’s citizens are able to participate in selecting their government, as well as freedom of expression, freedom of association and a free media.

2. Political Stability and Absence of Violence/Terrorism: captures perceptions of the likelihood that the government will be destabilized or overthrown by unconstitutional or violent means, including politically-motivated violence and terrorism.

4. Regulatory Quality: captures perceptions of the ability of the government to formulate and implement sound policies and regulations that permit and promote private sector development.

5. Rule of Law: captures perceptions of the extent to which agents have confidence in and abide by the rules of society, and in particular the quality of contract enforcement, property rights, the police and the courts, as well as the likelihood of crime and violence.

6. Control of Corruption: captures perceptions of the extent to which public power is exercised for private gain, including both petty and grand forms of corruption, as well as “capture” of the state by elites and private interests.

With this updated WGI dataset, we can assess trends over time and ask whether governance has improved in extractive-intensive countries. Reviewing the past 10 years of WGI data, we see in Figure 1 that governance, in various dimensions, on average has not improved in these countries. To the contrary, we observe a somewhat declining trend in Control of Corruption among extractive-rich countries, contrasting the (mildly) improving trend for the rest of the world (non-extractive countries). Similarly contrasting patterns are suggested by the data on other governance dimensions in the WGI, such as in Voice & Accountability and Rule of Law. 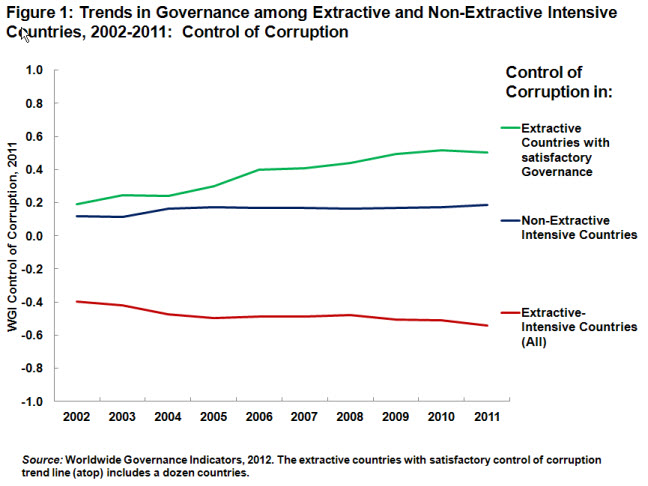 Thus, not only has the level of poverty in extractive countries risen, but governance has also deteriorated. Yet this trend – the average of the full sample of 54 extractive-rich countries – masks differences across countries. While there are many nations facing enormous governance challenges, there are countries that show that natural resources can be a blessing. For instance, in Figure 1 we see for a group of extractive-rich states, governance performance is not only satisfactory, but has been improving over the past decade.

And we know that governance matters. Past research has pointed to a very high payoff for governance reforms, which we have characterized as the ‘300 percent development dividend of good governance’. Improvements in governance (by one standard deviation) have been causally associated with about a three-fold increase in a country’s income per capita on average.

From the simple depiction in Figure 2 we see that high levels of corruption control are linked with higher income levels. It is noteworthy that this link applies both to resource-rich countries and others. In other words, an overall higher standard of governance matters for countries rich in natural resources at least as much as it matters to the rest of the world. High standards of governance and natural resources are not contradictory notions.

Yet particular attention to governance challenges is needed in extractive-rich countries, not only because of the particular governance and management problems associated with the industry, but also because most of these countries still struggle with national-level governance challenges. As we see in Figure 2, 55.6 percent of resource-rich countries rate poorly on corruption control (bottom third in corruption), while 33.3 percent rate in the average range (middle third). 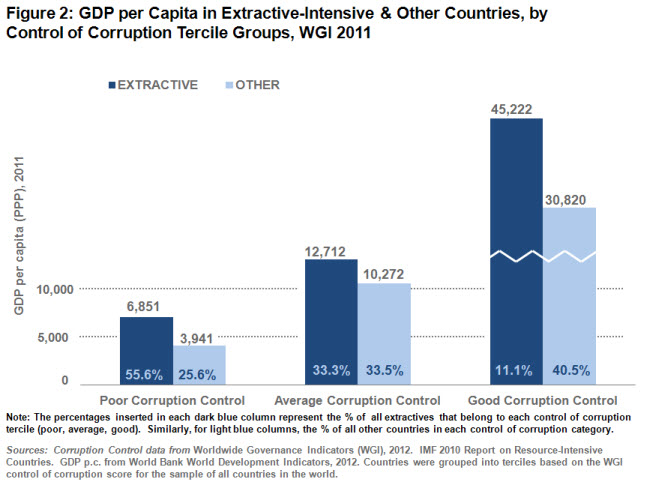 If the former is the case, namely that resources foster misgovernance, then extractive intensive countries are deterministically cursed. Fortunately, much of the literature and evidence point more strongly to the latter – that there is nothing predetermined about the resource curse. Instead, it seems that resources become a curse where governance and institutions are already weak.

Yet at the same time there is little room for complacency since the evidence also suggests that excessive dependency on natural resources can exacerbate governance challenges when they already exist. Concentrated natural resources can be a magnet for rent-capture, which in turn can contribute to: i) the elite capturing those rents and fighting to maintain control over them; ii) disincentives for regular political transitions; iii) instability more generally, as competing groups fight for control over resources; iv) ability by the elite to buy supporters and placate opponents by distributing resource rents, thus silencing opposition; v) unaccountability to citizens due to overreliance on extractive revenues rather than taxes, and, vi) macro-economic instability due to the ‘Dutch Disease’ (an overvalued exchange rate resulting from overreliance on extractive exports), and the instability of oil and mining revenues.

This is a daunting list of challenges, faced by many countries to varied extents, but the outcome is not predetermined. Countries that are led with integrity and that invest in good governance not only can mitigate the resource curse, but can turn it into a blessing. Highly industrialized countries like Norway are not the only the only illustrations of how resource abundance can be compatible with high governance standards; well-governed emerging countries, like Chile and Botswana, are also illustrative (as are those countries experiencing improved governance, highlighted above).

It is difficult to see the future. But we can suggest that whether the hundreds of millions mired in poverty in resource-rich countries will see their prospects deteriorate further, or instead improve, will depend on the quality of governance, and within it, the extent to which transparency, accountability and corruption control reforms take hold at the national level, as well as within the extractive industry in each country. Ultimately in these resource-rich countries, it is governance what will determine development success or failure.

Overcoming the resource curse is not only a major task for governments, but also for civil society and the private sector, both at the national and international levels. But multinational oil, gas and mining companies also bear an important responsibility in helping improve governance standards worldwide, as illustrated by the major debates surrounding the Dodd-Frank (Section 1504) natural resource disclosure rules (just passed by the SEC), as well as the pending EU disclosure rules. In short, collective action by key stakeholders will be essential.

Note: The updated Worldwide Governance Indicators (WGI), a joint research project between Brookings Institution and the World Bank, are now available on the new Brookings Development, Aid and Governance Indicators and at the World Bank. The WGI is prepared by Daniel Kaufmann, Aart Kraay and Massimo Mastruzzi, who are responsible for views and errors. The poverty data utilized in this analysis was drawn from the paper by Kharas and Rogerson, and this article benefitted from the assistance from Natasha Ledlie and Veronika Penciakova.

A year of opportunity for Africa