In Monterrey in 2002, the International Conference on Development for Financing ended with unprecedented agreement between rich and poor nations on how to collaborate in attacking global poverty by mobilizing finance, building new partnerships, and linking national and international development strategies. There was a palpable sense of optimism that by focusing on the Millennium Development Goals, addressing financing needs and developing strategies to enhance the poverty-reducing impact of domestic resources, private finance, international trade and debt relief, a real breakthrough could be made.

What a difference six years makes. At the Doha Financing for Development Conference to review the implementation of the Monterrey commitments held this week, the mood was very different. The US, Japan and EU are officially in recession. With the global financial industry in meltdown, private capital flows to developing countries—volatile in the best of times—are expected to fall by one-third. Global trade negotiations have made no progress, although calls for a revival of the Doha Round are being sounded ever more loudly. And official aid, after making progress in writing off the huge debts of the poorest countries, has stalled again.

One outcome of the Doha conference is a renewed call for attention to the quality of aid. There are several dimensions to this, but one that stands out is aid volatility. Like private capital, official development aid (ODA) is highly volatile and procyclical with recipient country GDP. In fact, for the typical aid recipient, it is five times as volatile as GDP and three times as volatile as exports. As a result, ODA fluctuations tend to amplify real business cycles in recipient countries. But high quality aid should offset recipients’ recessions. Now, just as an economic slowdown in developing countries threatens to push 40 million people into poverty (according to World Bank estimates), rich nations should be redoubling their efforts to provide more aid—not trying to postpone promised increases. At the Doha conference, rich countries reaffirmed (reluctantly in some cases) their commitments to raise aid to $130 billion by 2010 and double aid to Africa, but they have presented neither plans nor timetables to demonstrate how they would do this. Without such details, the commitment is a statement of intent, but with no teeth. Few observers believe that these promises will actually be met. And it seems impossible to conceive that aid will actually rise to help the most vulnerable countries counteract the global crisis, as it surely should if a true global partnership existed.

UN General Secretary Ban Ki-Moon has repeatedly urged rich nations to make good on their commitments to official development assistance. But the promises earlier this year by the EU (to honor its 0.56% pledge by 2010) and the G8 (to honor its Gleneagles pledges) are increasingly shaky, and the recent decisions by France and Italy to slow the rate of their aid increases could be seen as signs of faltering commitment. Although President-elect Obama has pledged to double US foreign aid, with bailouts and stimulus packages swelling the US federal budget, these commitments are likely to suffer. The spirit of partnership found in Monterrey has given way to a mood of “everyone-for-themselves” at the first hint of crisis. Renewing the partnership and the mutual responsibilities that entails is why developing countries pushed for a global conference next year on managing the crisis, and why some rich countries supposedly resisted this.

It may seem logical that in times of difficulty with their own domestic economies, rich countries should focus resources and attention at home. But in practice, foreign aid has not been driven by the economic health of the donor. So there are reasons to be skeptical of claims by rich governments today that recession should mean a contraction in foreign aid. In the first place, as the graphic shows, net ODA tends to swing far more widely than economic output in developed nations. For the 22 member-countries of the Development Assistance Committee (DAC) between 1960 and 2007, official aid is approximately 5 times more volatile than national income. For the US, even when assistance to Iraq and Afghanistan is removed, aid is 8 times more volatile than US national income. Second, there is little evidence that business cycles in rich countries directly affect foreign aid allocations. In fact, while it is the case that for some EU donors (Denmark, Finland, Italy, Netherlands, and Spain) ODA contributions have tended to decline following a decline in GDP, for most countries, and for the DAC as a whole, there is no relationship. For the US—the largest contributor of official aid—the opposite is the case: over a period of 47 years, a decline in gross income actually has occurred alongside an increase in net development assistance. There is no statistical relationship between US net ODA and either tax receipts, deficits or total government expenditures.

Unpredictability in foreign aid appropriations is far more likely to be caused by a mix of political and institutional factors: the inability of aid planners to predict correctly aid disbursements in recipient countries; the hodge-podge of programming mechanisms used by different donors; the fact that some recipients may fall in or out of favor with large donors due to regime-changes or changes in geo-political conditions (in particular, the end of the Cold War, the post 9/11 environment); and the ease with which most legislatures can raid the foreign aid budget for other purposes.

What is a drop in the bucket for rich countries, can cause crashing waves in aid-dependent nations. Aid volatility carries serious costs for recipient countries. It creates distortions in the choice of investment projects as high-return long-term projects are put off for fear that future funding might be unavailable. It creates fiscal unpredictability in countries relying on aid for budget support. It can also lead to fluctuations in real exchange rates. For poor countries, these costs can be substantial. When they amplify the cycle caused by the global economic downturn, aid cut-backs can send poor countries spinning into recession that then needs far more aid to reverse in the future.

One of the consequences of the Doha discussions may be to show how important a priority reducing aid volatility should be for donor countries. That the US, the world’s largest donor, has no global development strategy is problematic enough. That the US is also the world’s most fickle aid giver is cause not only for concern amongst American citizens who want to see their tax dollars used effectively, but for those poor countries whose economies suffer from erratic and inconsistent aid flows. President-elect Obama may have a hard time making good on promises to increase US foreign aid. But he could easily reduce its unpredictability. 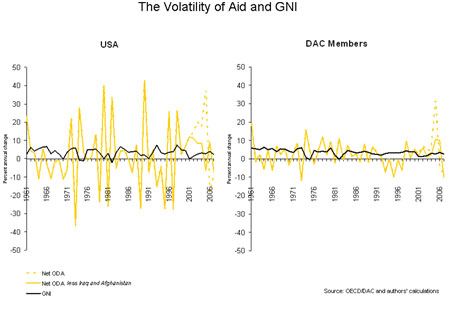