Editor’s Note: The updated version of the Worldwide Governance Indicators, covering 213 countries over the 1996-2009 period was released today at www.govindicators.org. It is accompanied by a new report, “The Worldwide Governance Indicators: Methodology and Analytical Issues.” The WGI constitute one of the largest and well-known compilations of cross-country data on governance.

Overall, the world continues to underperform on governance. Over the past decade, dozens of countries have improved significantly on such dimensions of governance such as rule of law and voice and accountability. But a similar number of countries have experienced marked deteriorations, while others have seen short-lived improvements that are later reversed, and scores of countries have not seen significant trends one way or the other.

Some countries, such as the Nordics, show that very high standards of governance can be attained, yet they and a few others are exceptions. Serious governance challenges can be found in every region of the world, and at all income levels. And subpar governance is an issue for rich and poor countries alike. Recent research using the Worldwide Governance Indicators (WGI) shows that industrial countries with more corruption also have higher budget deficits. Further, the evidence for developed and developing countries suggests that good governance can have a major positive impact on development.


For the past dozen years, the WGI have enabled analysis and research on governance, fostered debate and discussion, helped monitor governance performance, and raised awareness about governance issues in the development community and beyond. The WGI organize and synthesize data reflecting the views and reports of tens of thousands of stakeholders worldwide, including respondents to household and firm surveys and experts from nongovernmental organizations, public sector agencies, and providers of commercial business information. The WGI dataset released today is based on dozens of different data sources from over 30 organizations around the world, and aggregates the data from hundreds of disaggregated questions, covering over 200 countries around the world.


Governance has political, economic, and institutional dimensions. The WGI project defines governance as the traditions and institutions by which authority in a country is exercised. This includes how governments are selected, monitored and replaced; the government’s capacity to effectively formulate and implement sound policies and provide public services; and the respect of citizens and the state for the institutions that govern economic and social interactions among them.


This definition motivates six core dimensions of governance measured by the WGI:


1. Voice and Accountability: capturing perceptions of the extent to which a country’s citizens are able to participate in selecting their government, as well as freedom of expression, freedom of association, and a free media.


2. Political Stability and Absence of Violence/Terrorism: capturing perceptions of the likelihood that the government will be destabilized or overthrown by unconstitutional or violent means, including politically-motivated violence and terrorism.


4. Regulatory Quality: capturing perceptions of the ability of the government to formulate and implement sound policies and regulations that permit and promote private sector development.


5. Rule of Law: capturing perceptions of the extent to which agents have confidence in and abide by the rules of society, and in particular the quality of contract enforcement, property rights, the police, and the courts, as well as the likelihood of crime and violence.


6. Control of Corruption: capturing perceptions of the extent to which public power is exercised for private gain, including both petty and grand forms of corruption, as well as “capture” of the state by elites and private interests.


The WGI highlight some key findings and insights:

The most powerful economies are not always the best governed. Whether the focus is on the G-2, the G-8, or the G-20, the evidence on country-level governance indicates that the more powerful economies in the world do not necessarily exhibit the best governance. For instance, if we take an average of the governance ratings for the member countries of the G-20, 75 countries from around the world would rank above the average rank of the G-20 on Rule of Law, while 86 countries would rank above the average G-20 score on Voice and Accountability. As detailed in previous writings, much can be learnt from good governance examples in countries outside the G-20.

Nordic countries and New Zealand show that very high standards of governance are attainable. In contrast to more powerful and larger economies, the Nordic countries, as well as New Zealand, show that very high levels of governance can be attained, and consistently so, across all dimensions of governance. Singapore is another example of high quality governance in many dimensions, with the exception of Voice and Accountability, where it ranks nowadays in the bottom half of the world, following a significant deterioration over the past decade.

Good governance is also found in countries that are not wealthy. Being wealthy does not ensure high quality governance, just as being an emerging or developing economy does not automatically translate to poor governance. In fact, over 30 developing and emerging economies, including Slovenia, Chile, Botswana, Estonia, Uruguay, Czech Republic, Hungary, Latvia, Lithuania, Slovakia, Mauritius, Poland, Rwanda and Costa Rica have higher governance scores than industrialized countries such as Italy (ranked 87 in Corruption Control) or Greece (ranked 82). (See Figure 1) 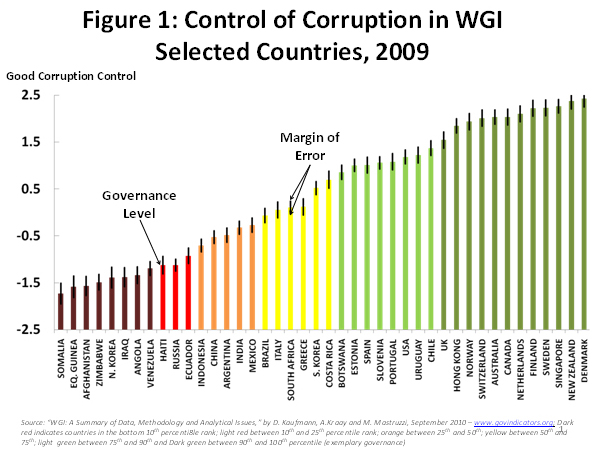 Where there is commitment to reform, significant improvements in governance can and do occur in the short term. Over the period 1998-2009, countries in each region of the world have shown substantial improvements in governance, even if at times starting from very low levels. Examples include Peru, Iraq, Liberia, Croatia, Ghana, Indonesia and Sierra Leone in Voice and Accountability (see Figure 2, below); Indonesia, South Africa, Algeria, Tajikistan, Serbia, Congo, Rwanda and Angola in Political Stability and Absence of Violence/Terrorism; Turkey, Indonesia, Ethiopia, Liberia, South Korea, Hong Kong, Iraq, Rwanda and Serbia in Government Effectiveness; Armenia, Liberia, Democratic Republic of Congo, Georgia and Iraq in Regulatory Quality; Latvia, Algeria, Albania, Liberia and Georgia in Rule of Law; and Hong Kong, Qatar, Serbia and Liberia in Control of Corruption. 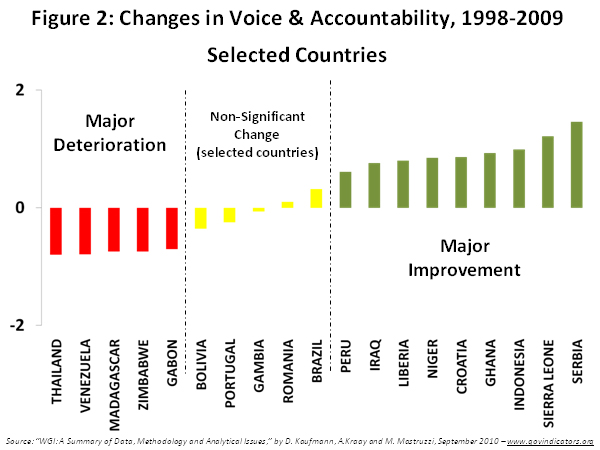 Governance can significantly improve over a relatively short period of time. In fact, nearly one-third of the countries in the WGI show a significant change in at least one of the six aggregate indicators over the past decade, roughly equally divided between improvements and declines.

Yet, on average the world has not significantly improved in the quality of governance over the past dozen years. Despite the progress noted for some individual countries, others have experienced major deteriorations since 1998 in several governance dimensions, including Argentina, Cote d’Ivoire, Eritrea, Thailand, Venezuela and Zimbabwe, among others. Scores of other countries have not experienced significant changes in either direction in recent years. Furthermore, several countries have remained in a governance crisis throughout the period, such as Somalia, North Korea, Venezuela, Myanmar, Sudan, and Afghanistan.

Sustained commitment to governance reforms is needed to avoid reversals. The case of Afghanistan is noteworthy because the country exhibited substantial improvements (from very low initial levels) between 1998 and 2004 in most dimensions of governance, yet these gains were not sustained during the latter part of the decade.


In fact, for a number of countries the lack of overall progress over the past decade and beyond is due to the short governance reform spurts followed by reversals (or vice versa) over short periods of time. For instance, Niger improved significantly on Voice and Accountability between 1998 and 2004, but experienced deterioration subsequently; Mauritania saw improvements in Regulatory Quality between 1998 and 2002, but marked declines thereafter.


Conversely, Nepal declined on Voice and Accountability and in Political Stability between 1998 and 2004, but since 2005 its performance has substantially improved. And, Azerbaijan, Uzbekistan, Kyrgyzstan and Cote d’Ivoire saw significant deteriorations in political stability in the earlier period, but have seen an improvement over the past 5 years or so. Similarly, Bangladesh experienced significant deterioration in corruption between 1998 and 2005, but has seen a marked improvements in recent years.


The research indicates that when governance is improved by one standard deviation, infant mortality declines by two-thirds and incomes rise about three-fold in the long run. Such advances in governance are readily achievable where political will to implement reforms is present, since a one standard deviation improvement in governance constitutes just a fraction of the difference between the worst and best performers. For example, in the dimension of Rule of Law, one standard deviation is all that separates the very low ratings of Afghanistan or Zimbabwe, from the still-low ratings of countries such as Nigeria or Paraguay; or the moderate ratings of Turkey or Ghana from the stronger ratings of Chile or Portugal; or what separates these from some of the best performers such as Norway or New Zealand.


Furthermore, governance failures in industrialized countries impact the world’s financial stability and overall growth prospects, as demonstrated by the costly repercussions of the recent financial crisis that started on Wall Street. Further, recent analysis utilizing the WGI data indicates a strong association between corruption and the size of budget deficits across industrial countries. Improvement in control of corruption from the subpar levels of Greece, for instance, to the good governance levels of the Netherlands, is associated with an average reduction of about 8 percentage points in the fiscal deficit. (See Figure 3) 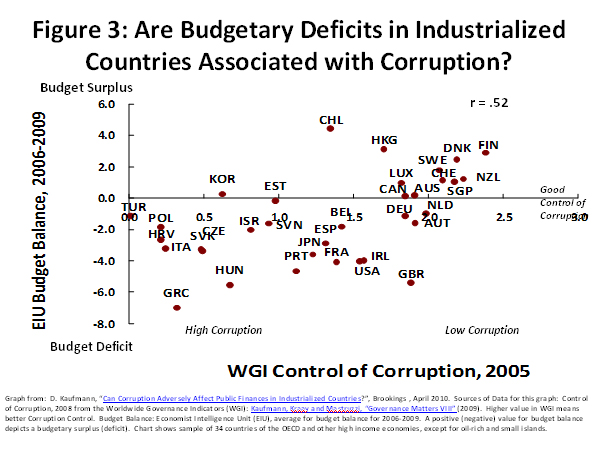 Measuring governance is difficult, and all measures of governance are necessarily imprecise, requiring interpretative caution. A unique feature of the WGI is its recognition of this imprecision. The indicators explicitly report margins of error for all country scores, and these should to be considered when comparing countries (as in Figure 1). Simply looking at differences in governance scores is often insufficient since some changes may be too small to be meaningful. Thanks to improvements over time in the WGI, these margins of error have declined, and, even though they remain non-trivial, they are significantly lower than the imprecision of individual indicator of governance. And in spite of these margins of error, the data supports many meaningful comparisons over time and across countries, as illustrated above.

The WGI are coauthored by Daniel Kaufmann (Brookings) and Aart Kraay and Massimo Mastruzzi (the World Bank). The WGI are a compilation of the views and perspectives on governance of a large number of survey respondents and experts worldwide. They do not reflect the official views of Brookings Institution, the World Bank, its Executive Directors, or the governments they represent.