A number of studies have shown that corruption hinders development around the world. Such findings have elevated governance, alongside macroeconomic discipline and openness, as a determinant of growth and economic development. Less focus has been paid to possible links between corruption and macroeconomic outcomes.

Some research in past decades has focused on the political economy of macroeconomic policymaking, and some papers have suggested that corruption can affect a country’s public expenditures. But, because studies generally view governance and macroeconomic policies as separate determinants of growth and development, there has been less research on the possible links between the two factors. This is particularly the case in the industrialized world, where the challenges of governance and corruption tend to be underestimated.


Such inquiry is motivated by the simple observation that, contrary to popular belief, there are significant differences in the extent of corruption and in the quality of governance among industrialized countries. Further, it is also well known that there are large differences in the budgetary balances (ranging from large surpluses to large deficits) of industrialized nations, even among countries within common zones or “coordinating” bodies, such at the EU and the OECD.


First I ask the a priori question: Through which channels could corruption affect the public finances of a country?


In a forthcoming paper, I detail a number of such mechanisms, some of which are drawn from the existing literature:

1. Corruption lowers tax revenues: Public resource mobilization can be impaired through tax evasion and creative tax avoidance schemes. Additionally, corruption opportunities provide an incentive to make (or at least keep) the tax code unduly complex, and subject to many discretionary exemptions. Further, corruption renders the tax collection institutions less effective and efficient. And, corruption can affect customs administrations, even if this particular challenge is more pervasive in countries which are not rich.

2. Corruption increases public expenditures: Corruption may be associated with bloated bureaucracies, excessive and less productive public investments, and an inefficient composition of expenditures. For example, large wage bills may overshadow operations and maintenance expenditures. To maximize lucrative rent-seeking, decisions can be skewed toward large capital investments at the expense of labor-intensive ones, for instance.

3. Corruption affects public sector debt and financial sector risk: Where corruption exists and transparency is lacking, decisions regarding the composition of public debt may be more risky, and debt servicing may become more expensive for the national treasury (and may unduly reward outside private counterparts).


More generally, misgovernance, as well fraud and corruption, in financial instruments can jeopardize the whole financial system. As I have written previously, some of this corruption may not be strictly illegal, such as the subtler forms of capture of the financial sector regulatory or policy regime (which we labeled as state capture). When the financial system falters, private liabilities may become public, as occurred during the U.S. bailout of Wall Street. These bailouts indirectly affected the fiscal balance through the rise in public liabilities and directly affected it through the stimulus packages that aimed to mitigate the recessionary impact of the financial crisis.

4. Corrupt data matters for a fiscal crisis: The more a country distorts, hides and delays disclosure of the true status of its financial and national statistics, the more likely this will introduce destabilizing uncertainty into financial markets, and the higher the probability that a financial and fiscal crisis may result. Accurate and early disclosure of a country’s financial and economic situation is crucial for ensuring that remedial measures are enacted. A faltering country may enact necessary reforms on its own once its situation is disclosed. However, even if a national government is unprepared to take the necessary remedial steps, the international market and/or neighboring countries and international institutions may pressure it to resolve budding fiscal crises in a timely manner.

5. The underground economy affects the fiscal balance: Public misgovernance may also be associated with a larger unofficial (or shadow) economy. A large shadow economy reduces tax revenues, as alluded to in the first item. Further, large unofficial economies shrink the tax base and may force higher official tax rates, which in turn may feed into the vicious cycle of expanding shadow economies and high statutory taxes (which often go uncollected). Also, a large underground economy hampers growth, FDI, exports and overall productivity, all of which further reduce overall tax revenues.


It is expected that corruption, through the aforementioned six mechanisms, is linked to defective public finances and high fiscal deficits. The extent to which any of these mechanisms may dominate the rest is difficult to determine, and likely varies from country to country. Nonetheless, as a whole, these mechanisms are hypothesized to significantly influence industrialized countries’ fiscal balances.


What are the main findings? Utilizing governance and budgetary data from over 35 industrialized countries, and controlling for other factors, I find that:

2. There is a strong relationship between corruption and fiscal deficits in industrialized countries. An improvement by one standard deviation in corruption control in 2005 is associated with about a 3.5 percentage point reduction in the average fiscal deficit between 2006 and 2009 (controlling for other factors), while a larger improvement in corruption control, by two standard deviations, is associated with a seven percentage point reduction in the fiscal deficit (see the chart below for the simple correlation). 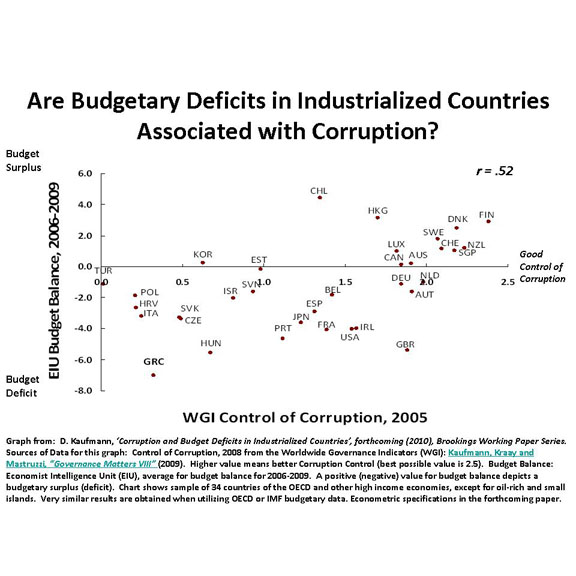 3. “Legal Corruption,” or state capture (which also varies substantially among industrialized countries), is also significantly associated higher fiscal deficits. The econometric estimates suggest that the impact of lowering the extent of legal corruption (and capture) on the fiscal deficit is very similar to that of lowering traditional forms of corruption.


Likewise, being an OECD member also does not appear to guarantee an improved fiscal situation. By contrast, being an oil producing nation does help the country’s fiscal stance (naturally, yet there are obvious exceptions in countries such as Venezuela, which are not included in this study).


A number of implications emerge from this analysis—all of which are discussed in detail in a forthcoming paper. Here I highlight the following:


First, an increased focus on the challenges of corruption—in its legal and illegal manifestations— in industrialized countries is long overdue. Corruption is far from an exclusive problem afflicting some poor countries.


Third, and as a logical corollary, countries where macroeconomic instability and misgovernance coexist may need to map the particular channels through which corruption affects public finances in that country, and subsequently implement a strategy for improving those key governance dimensions.


I outlined above six main channels (and a number of subcomponents in each) through which misgovernance and corruption can affect a country’s public finances. The first set (taxes and expenditures in particular) exemplifies the direct links between corruption and the fiscal deficit, while the latter channels are more indirect, but not necessarily less important. The specific diagnosis for which channels matter the most, and whether legal or illegal forms of corruption and capture dominate, ought to be country-specific, since they will be different in Greece, Italy or the U.S., for instance.


Finally, global governance bodies, such as the EU, the G-20 and the IMF may need to pay more attention to enhancing incentives that encourage their member states to improve both their governance and fiscal standing. Required improvements include the production and disclosure of transparent, timely and unaltered data on public finances, economic activities and prices, as well as further dissemination and use of governance indicators.


International Financial Institutions, such as the IMF, need to refocus (as they did a decade ago) on the serious challenges of corruption that afflict a number of its borrowers, undermining the country’s macroeconomic stability. Also, these global institutions ought to review afresh the distortive tax, public expenditure and public indebtedness regimes in many countries and their links to governance.


Merely focusing on crisis coordination and externally funded bailouts, or demanding statutory tax hikes—rather than expanding the tax base and cutting “pork”—is unlikely to lead to sustained improvements. Global economic and financial institutions increasingly shy away from addressing governance and corruption issues. This can be explained by the political sensitivities associated with these, as well as the perverse incentives for many government leaders to mask such problems in their midst. Yet the cost of preventive inaction on governance issues is enormous and far beyond the confines of the misgoverned country, as illustrated in recent financial crises.