Editor’s Note: On March 25, 2012, Daniel Kaufmann spoke at the opening plenary session on Measurement & Consequences of Corruption at the Economic Research Forum’s 18th Annual Conference in Cairo, Egypt. In his presentation, Kaufmann discussed the deteriorating quality of governance in the Arab world that has been largely ignored by the international community, which has continued to provide increasing volumes of foreign aid to corrupt governments. Kaufmann outlines the topics discussed below, and you can download his Power Point slides here.

Evidence suggests that over the past decade, misgovernance in the Arab world was not only acute, but also worsened over time. Yet this poor and deteriorating quality of democratic governance was largely ignored by the international community, which continued to provide increasing volumes of foreign aid to governments whose standards of democratic voice and accountability were among the worst in the world (Figure 1). The strategies and lending practices of donors and International Finance Institutions’ (IFIs) were often supported by partial and uncritical assessments of country performance. 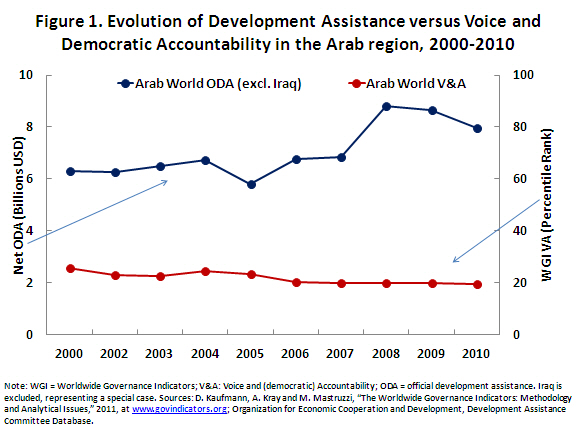 The data was clearly pointing to the large and growing democratic governance deficit over the last decade in almost all countries in the Arab world, as seen in figure 2 below (including Turkey as a benchmark comparator), even if we are mindful of the fact that there is some imprecision in any governance indicator. 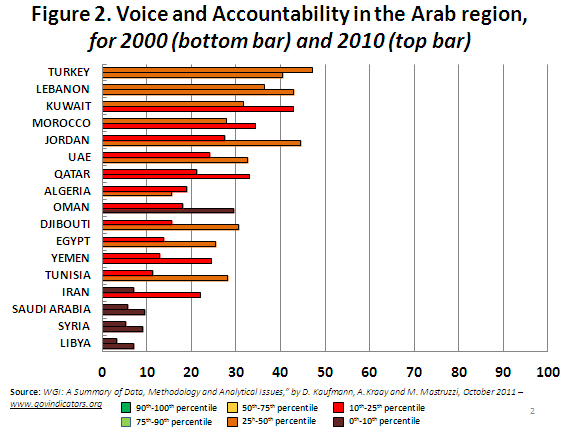 But what about corruption? Does the evidence also show such weak control of corruption in the countries in the region?


On corruption, the picture is more complex. Among others, international measures of corruption are available from Transparency International (TI) and also as one of 6 indicators among the Worldwide Governance Indicators (WGI, shown in Figure 3 below for Control of Corruption). The performance across countries in the region has been rather mixed. Although a number of countries in the Gulf performed satisfactorily, many countries in the region (including Libya, Yemen, Syria, Iran, and Egypt) performed very poorly according to any of these indicators.


Like any other measure of governance, measures of corruption are also subject to imprecision. It is important to estimate and disclose the extent of imprecision in any of these measures. In the figure below, the confidence intervals are shown, and one corollary is that it is unwise to over-interpret small differences in scores or focus on identifying one ‘top’ or ‘bottom’ country.


Nonetheless, over the past 15 years substantial progress has been made in measuring corruption, particularly through the implementation of rigorous and specialized surveys of firms and individuals, and through a proliferation of different sources, often measuring different aspects of corruption, through different methods. 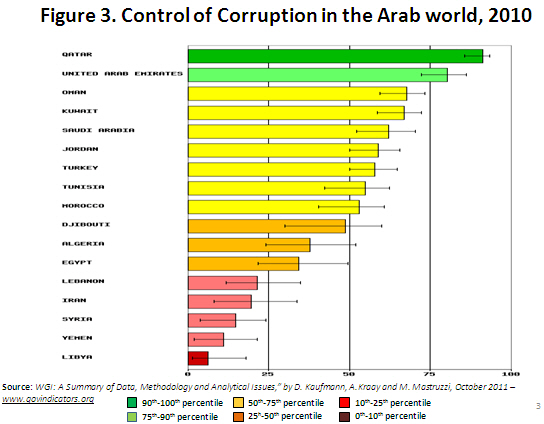 Yet measuring corruption still remains challenging because the act is often hidden and obscured from the public eye. One difficulty is in estimating corruption in authoritarian regimes, where reticence to report bribery and high level political corruption often prevails. In these authoritarian regimes corruption tends to occur at the top, directly committed by leaders and/or their families (spouse, in-law, son, abetted by their very close cronies).


This type of high-level corruption often remains out of the limelight, partly due to a lack of disclosure by the (often controlled) media in these countries. As a result, some estimates of corruption in some authoritarian regimes, such as Tunisia in the past, may have understated the actual extent of corruption.


Furthermore, there are particularly complex manifestations of corruption that are largely excluded from international corruption indices – making accurate measurement even more difficult. One important dimension which is missing from international corruption indices example is state capture and related aspects of ‘legal corruption’. State capture refers to the undue and often corrupt influence of the powerful elite to shape the institutions and policies, laws and regulations for their own benefit rather than for the public good.


Powerful economic groups among the elite are commonly associated with capture, but an autocrat’s family, an ethnic or religious sect and/or the military can also succeed in exerting such undue influence, or worse, outright capture. Prior to Arab Spring transition, monopolized top-down corruption — often committed by a ruler’s spouse, son or in-laws — was an instrument for the capture of the polity and economy, which is much different than the more decentralized nature of systemic corruption that prevails in a number of democracies. The negative consequences of state capture by the few are clear anywhere, and in much of the Arab world they have resulted in the political and economic exclusion of large segments of the population, such as the young, the impoverished peasants, and in some countries women as well.


While some progress in measuring state capture, more needs to be done, and particularly in terms of cross-country measures that would permit their integration into international corruption indices. This would also permit deeper monitoring of whether a country in transition is simply traversing from one type of (autocratic) capture to another (quasi-democratic) form of capture, or to a more successful system where both the polity and the economy are competitive and inclusive.


Lessons from past transition experiences suggest that merely doing getting rid of an autocratic leader does not automatically guarantee success. Countries in transition can go down the wrong path (such as Iran or Pakistan); muddle through with no meaningful reform for decades (some countries in Central Asia); evolve into “managed quasi-democracies” (Russia); or successfully consolidate democratic governance and largely avoid capture by the powerful few (Chile, Turkey, Indonesia, Central Europe).


What these examples teach us is that challenges of capture need to be taken seriously at early stages of the transition. The extent to which political and economic transitions evolve into increasingly captured economies (Ukraine) or competitive market economies (Central Europe) matters enormously for whether transitions succeed or not. Some countries in the Arab world are beginning to make their way through this process. The end result will partly depend on how they tackle corruption and address the risk of state capture by powerful vested interests.


This focus on capture has many implications, which are discussed in more detail in a brief article. International organizations, think tanks and experts ought not be afraid of frankly analyzing and openly disclosing – using constantly improving data — the challenges of governance and capture in these countries. The international community should adopt a new “business model” for partnering with countries in the region, allocating aid more selectively, focused increasingly outside of central governments while also promoting a more decentralized approach).


And to further the reforms to mitigate the specter of capture, there should also be concerted support for an integrated package of transparency-led reforms, as well as support competitive politics, for gender and youth inclusiveness, and for the competitive small and medium scale private sector. Such an ‘anti-capture’ reform package would provide momentum for much needed job creation and inclusive growth, which are key objectives during the transition and the subject of a book we will discuss at the Economic Research Forum 18th Annual Conference.