It’s been two years since the Obama administration announced Deferred Action for Childhood Arrivals (DACA), a two-year deportation relief and work authorization program. DACA and deportation policies have been in the news lately surrounding the rise of unaccompanied minors crossing the southern border, and House Republicans are trying to tie the influx specifically to the program. The administration continues to stress that despite rumors in their home countries, these border crossers are not eligible for DACA.

The humanitarian situation on the border is complex and worrisome. But regarding DACA, we should really be focusing on the beginning of the renewal process. The DACA program continues to accept initial applications, but the benefit lasts only two years. After that, recipients must renew their deportation relief by filing paperwork with the United States Citizenship and Immigration Services (USCIS) and pay another $465 application fee. A recent national study of self-selected DACA-eligible young adults details the benefits of the program: 60 percent of those approved obtained a new job, 45 percent increased their earnings, and 21 percent obtained an internship.

Through March 2014, USCIS approved approximately 550,000 DACA applicants. The earliest DACA recipients are now pursuing renewal to continue lawful presence and work authorization, which in some states makes them eligible for driver’s licenses and in-state tuition. USCIS now has the task of processing more than a half million potential renewals while still adjudicating new DACA applications.

Although half of applications for the program were filed in the first four months (August–November, 2012), the adjudication process yielded outcomes that have been staggered over the entire two-year period. Renewal windows are tied to the date applicants were adjudicated—not the date they applied. USCIS guidance specifies applying for DACA renewal during a 30-day window—no earlier than 150 days before expiration but no later than 120 days before expiration.

DACA recipients as well as legal service providers, community organizations, and municipal agencies who helped them with their initial applications, had long awaited the release of the renewal form, which has been available since June 5. Many were nervous about the amount of time it would take for USCIS to renew a recipient’s DACA status and the legal ramifications of accruing unlawful presence and losing work authorization as they watched the 120 to 150 day window sail by for the earliest DACA recipients.

Using data from two Freedom of Information Act (FOIA) requests, we are able to estimate month-by-month demand for renewals. 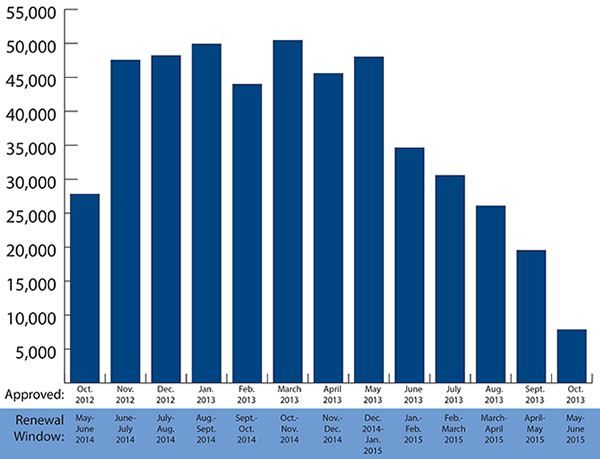 Note: This does not include a small number of applicants who were approved prior to October 2012. Source: Brookings FOIA data

In October 2012, the first month with a significant number of DACA adjudications, almost 28,000 young people were approved for DACA. Given the renewal window, these people must have submitted their renewal application by the end of June 2014.

We expect the volume to really ramp up starting this month. In November 2012, 48,000 DACA applicants were approved. Those 48,000 will have to submit their applications for renewal no later than the date they received their work authorization this July. And for the most part over the following six months into 2015, that pace continues (between 44,000 and 50,000 renewals should be submitted nationally each month). At that point, nearly two-thirds (65 percent) of all of the renewals should be processed.

After January, the number of renewals that will need to be submitted and processed each month will taper. This reflects the tempo of applications; the many applicants who submitted their applications during through November 2012—the very beginning of the program—created a bulge that took USCIS time to work through.

Across states, however, DACA renewals will play out differently.

Temporal trends among these states are relatively similar. The most notable distinction is California, which accounts for about one-quarter (27%) of renewals. Not only is California home to the most DACA recipients, but their approvals came faster than other large DACA states. Applicants and service providers in California need to stay on their toes; of the renewals they will see between now and November, one-third (35 percent) will need to be submitted before the end of July. Not only is that a large share of renewals to process, it’s a huge number: almost 25,000.

In fact, in most of the five big DACA states, around half of their renewals will need to be filed by the end of August.

Much greater variation in the renewal rhythm lies with states with smaller numbers of DACA recipients.  Like California, DACA applicants and those who may be assisting them in Missouri, Iowa, Ohio, Connecticut, New Jersey, Massachusetts, and Pennsylvania will have to be prepared to get a large share (more than one-third) of DACA renewals submitted by the end of July. States like New Mexico, Tennessee, Nevada, and North Carolina will not see an uptick in pressure on DACA renewal until October and November. While a later renewal window may be linked to later application dates in these states, the timetable is tied to adjudication dates. (See Table 1 (Excel download) for state-level data on renewals.)

Across communities, legal service providers, community-based organizations, and advocates are focusing on getting the word out to those who are up for renewal and assisting them with filing the paperwork so their deportation relief does not expire. While it remains to be seen how well renewal rates match initial DACA applications, one of the biggest barriers to renewing is likely the same as applying initially—the $465 cost.

[1] Note Arizona ranks fifth for approvals but sixth for overall total applicants in this dataset.