The recent conviction (ostensibly for ordering jailhouse witetaps) of Baltasar Garzón, the Spanish judge who took on corrupt officials, despots, terrorists and human rights violators during the Franco regime, casts a dark shadow on Spain’s judiciary and hints at a political witch-hunt.

In October 1998, Judge Garzón catapulted to prominence when he broke with traditional international law and tried to extradite the former Chilean ruler Augusto Pinochet from the United Kingdom, where he was receiving medical treatment, to Spain. At the time Pinochet, like other former autocrats, was fully confident that as a former leader of a sovereign nation he was legally untouchable abroad, regardless of the crimes he had committed while in power. Through that legal challenge Garzón became a de facto architect of the principle of universal jurisdiction.


Judge Garzón has no small ego. He has taken activist stances on sensitive issues and sought publicity. This has not endeared him to Spain’s arch-conservative Supreme Tribunal nor other jurists and politicians in Spain, where he touched powerful vested interests by unearthing high-level political corruption and state-sponsored death squads. Further, professional and political envy at his national and international prominence (he has been dubbed the ‘Superjudge’) cannot be disregarded as a factor in his current predicament.


Garzón may also have made some errors of judgment, such as ordering wiretaps in a political corruption and money laundering case when the law was unclear on the permissibility of such action. According to Human Rights Watch he was not alone in approving these wiretaps, yet, he was singled out. Worse, even though he may have made some missteps, being convicted on criminal charges seems to be a wholly disproportionate sanction.


As reported by the New York Times, Reed Brody, counsel for Human Rights Watch, said the “accumulation of the cases against Judge Garzón” suggested “reprisal for his past actions against vested interests.” “Unfortunately,” he added, “it certainly looks like his enemies now got what they wanted.”


A travesty of justice appears to have been committed in Spain, with the fundamental principle of judicial independence becoming compromised. This may seem shocking and unlikely in a country like Spain, where impressive gains in governance and rule of law had been made in the post-Franco era. In fact, over the past few decades many countries in Latin America have looked up to and learned from Spain’s rule of law and judicial institutions, benefitting from considerable technical collaboration with jurists and legal experts in this area.

However, the evidence suggests that over the past decade something has changed in Spain’s governance, and not for the better. Shortly after judge Garzon tried to have Pinochet extradited in 2000 – over a decade after the Chilean dictator left power with immunity – Spain rated higher than Chile on the quality of its rule of law institutions according to the Worldwide Governance Indicators (WGI). By 2010 the countries’ respective positions had reversed, resulting from a decline in the quality of rule of law in Spain and a slight improvement in Chile (Figure 1). 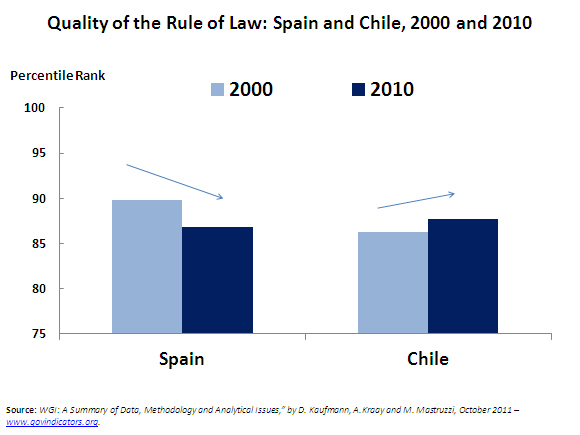 Worse, by 2010 Spain’s performance on rule of law was mediocre by OECD standards. As we can see in Figure 2 Spain (ranked 29th) not only rated well below the Scandinavian countries, which rated among the best in the world, but it also rated below many of its peers, including New Zealand (5th), Canada (9th), Ireland (13th), Hong Kong (20th) and Malta (22nd), among others. There was nothing inexorable about a deteriorating rule of law — each country featured in Figure 2, with the exception of Spain, exhibited some improvement in their rule of law over the past decade. 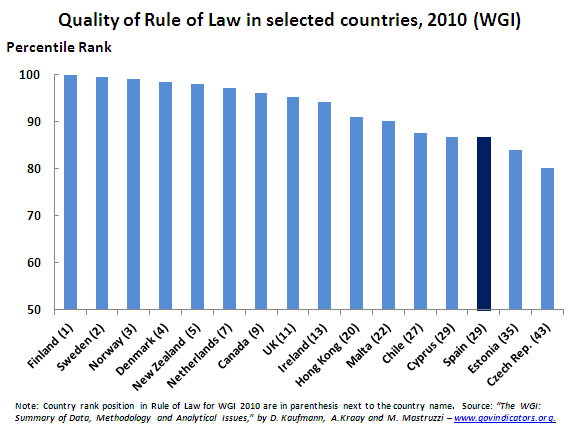 Spain’s quality of rule of law in 2010 was roughly at the level of Estonia (which improved markedly over the past decade), Cyprus, Bermuda, Guam and French Guyana. The declining and mediocre ratings for Spain may be symptomatic of a broader governance challenge. Among OECD countries Spain also rates near the bottom in government effectiveness, control of corruption and regulatory quality. In fact, it is a poignant irony that years after the contribution of Spain’s Judge Garzón in challenging Chile’s immunity to Pinochet, Spain rates below Chile in virtually all six WGI governance indicators. Deeper analysis is needed to unlock the factors behind such institutional decline in Spain over the past decade.


Arguably, Spain has ceased to be an example for Latin American countries to emulate. In fact, the powerful vested interests that persecuted Judge Garzón are a stark reminder that governance failings are not the exclusive domain of emerging and developing countries, but are all also too common in rich industrialized countries.


Further, the discussed current governance indicators are based on data from 2010. New data is not yet available, but given the current turn of events in the Garzón case, Spain’s rule of law ratings for 2011 and 2012 are unlikely to pick up.


Although serious damage has been inflicted to the Spanish judiciary, experience shows that it is possible to reverse course, even if in this case it may take some nudging from international institutions like the European Court of Human Rights (and the media likes of the Financial Times) supporting Spain’s own voices for change.