Editor’s Note: Based on new Census data, the U.S. Census Bureau recently released its first set of U.S. population projections for 2012-2060; the data reveals projections of the nation’s population by age, race and Hispanic origin for the next 50 years. William Frey further discusses these projections and how they will reverberate through U.S. politics, education system, and labor force. Also featured are William Frey ‘s related publications, which discuss and highlight key trends in the U.S. demographic shift.

In the wake of a presidential election that underscored the rising political clout of fast growing minority groups, the Census Bureau’s new population projections reiterate the trend.  These projections, the first to take account of the 2010 Census results, paint a picture of a nation that will become increasingly diverse, beginning at the bottom of the age distribution.

Nationally, the new projection posits a “majority-minority” population by 2043, but for younger age groups, the tipping points will come much earlier: 2018 for children under age 18.  This reflects the recent growth of younger new minority populations including Hispanics, Asians, and those identifying as “multiracial.” It also reflects a stagnant, aging white population expected to by decline by 10 percent from 2012 to 2060. 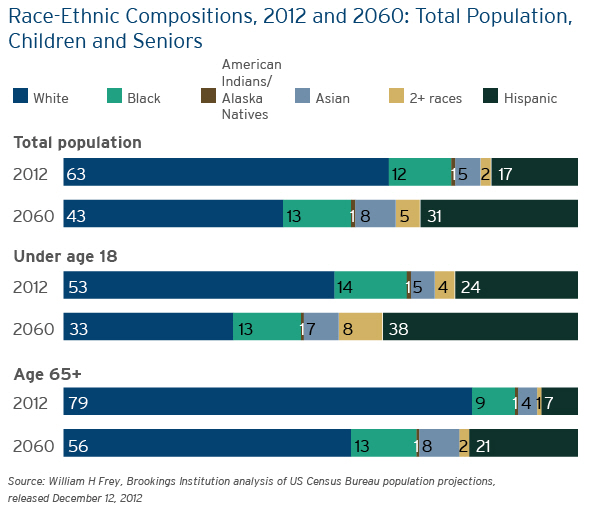 The new projections anticipate slower national growth than the earlier 2008-based projections, by building in lower immigration and fertility assumptions, in keeping with recently observed shifts.  Thus, the national population benchmark of 400 million (up from 314 million today) is not expected to be reached until 2051, versus 2039 in the older projections.  Still the nation’s combined minority population is expected grow from 116 million in 2012 to 241 million in 2060. This translates into growth rates of 142 percent, 116 percent and 256 percent for the Hispanic, Asian, and multiracial populations, respectively. Blacks are expected to grow by 50 percent.

The white population in contrast is expected to increase from 197 million in 2012 to a 199 million peak in 2024, and then decline to 179 million in 2060.   This white peak population is smaller and occurs earlier than with the older projections, peaking at 207 million in 2031, reflecting an earlier onset of white natural decrease (deaths outnumbering births).

The increasingly shrinking white population is also a consequence of lower white fertility. This is partly responsible for the majority-minority tipping point for children moving up to the year 2018, compared with 2023 in the older projections.  As young minorities age, the majority-minority tipping points get reached in later years for subsequently higher ages.  The 45-64 age group doesn’t tip until 2051, and the over age 65 population is still majority white in 2060.

The older population stays whiter because the large and mostly white baby boom population just entering retirement beefs up those older ages.  Thus the biggest diversity transformation will continue to take place in the younger ages as white populations decline and minority populations gain.    Thus even in 2060 the white senior population is substantially less racially and ethnically diverse than younger age groups—especially children. 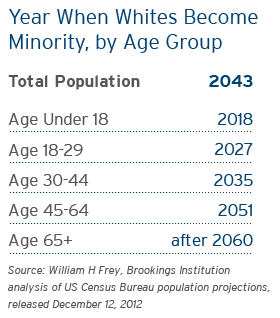 Of course, these shifts will reverberate through our politics, the education system, and our labor force.

Much heralded in the last election, the 18-to-29 age group, of which minorities made up a substantial component, will continue to be the most racially diverse.  As soon as the 2020 presidential election, this age group will be comprised of 47 percent minorities, including 23 percent Hispanics, many more of whom will be eligible voters than in the past election.  By 2028, minorities will be a majority of this population.

There will be a continual transformation the nation’s age 5-to-17 school aged population which will become majority-minority in 2020.  At that time, Hispanics will comprise 26 percent, blacks 14 percent, and Asians 5 percent.  While many school systems in more diverse parts of the country have begun to adapt to student populations of different cultural backgrounds and languages spoken at home, these numbers make plain that school systems across the nation will stand on the front lines of change.

Our labor force aged population will not turn majority minority until 2038.  However, over the 18 year period, from 2012 to 2030, most of the largely white baby boom generation will be graduating out of those ages.  The 18-to-64 population will show a decline of 14 million whites, but a gain of 23 million minorities, of which 15 million are Hispanics—rendering minorities and especially Hispanics as the backbone of future labor force growth.

These projections also indicate the population will be aging, which along with a growing number of children will increase the number of dependents per worker.  Still the ages of these dependents will differ by racial and ethnic group.  For whites, the ratio of children to seniors falls below 1.0 as the number of white seniors exceeds white children in 2016 and throughout the projection period. But for Hispanics the ratio ranges from 5.6 to 1.7 over the projection period.  This reflects another way that the younger Hispanic population is faced with different kinds of concerns than the older white population, affecting their voting preferences and our national policies.

Overall, the new census projections place an exclamation point on the fact that we are becoming a more racially diverse society beginning with our youth.  Just like the postwar baby boom generation, which by virtue of its size and independent character, influenced all aspects of our economy and social institutions as it aged up the life cycle, so too will  today’s younger minority infused generation help to shape all aspects of our national life as they move into middle age.  It’s crucial for politicians, community leaders, and policymakers to pay attention to these changes as their decisions about how to incorporate this generation into the new American mainstream hold important implications for our nation’s future prosperity.