In a previous commentary on “Brazil’s Executive-Legislative Relations under the New Coalition Government”, I speculated on what the governing coalition of the newly elected president of Brazil, Dilma Rousseff, would look like. In particular, I focused on Dilma’s governing coalition in regard to three interconnected managerial choices that would have important consequences to the quality and costs of her relationships with Brazil’s Congress. These choices include: the number of parties in the coalition, the ideological heterogeneity of those parties and the degree of proportionality or power-sharing among coalition partners.

The theory behind these choices is the following: coalitions that are larger, with greater ideological heterogeneity, or with a higher concentration of powers in one of its members are more difficult to manage, generate higher coordination problems and consequently are more expensive to be governed.

Given Dilma’s electoral coalition obtained the majority of seats in both houses of Brazil’s Congress, she had no incentive to ignore even small parties in her governing coalition that embraced her candidacy when she was just a blurred shadow of Lula’s popularity. Although Dilma faced great pressures to offer rewards to members and internal factions of her own political party, the Worker’s Party (PT), she needed to build a cabinet with positions allocated proportionally to the other parties in her coalition.

As expected, Dilma decided to invite a large number of partners into her coalition cabinet, but the number was slightly smaller than that of Lula’s. Whereas Lula had eight political parties in his first cabinet, Dilma invited seven. The number of parties did in fact translate into a larger majority within Congress since the nominal size of Dilma’s coalition enjoys 328 seats in Brazil’s Chamber of Deputies, which is above the 60 percent supermajority of 308 votes needed to pass constitutional amendments. Therefore, if she faces problems pursuing her political agenda, it would not be credible for her to blame her political opposition.

The ideological spectrum of Dilma’s coalition is very similar to that of Lula’s, spanning from extreme leftwing to extreme rightwing parties. Dilma will certainly try to maintain the core macroeconomic stability and social policies currently in place in Brazil.  Because this policy agenda will be very similar to that of her predecessor, Dilma will probably not face too much opposition from coalition members as a result of their ideological differences.

In terms of power sharing, Dilma’s first cabinet was less monopolistic than Lula’s given that she allocated 17 (around 46 percent) cabinet positions to PT while Lula allocated 21 posts (60 percent). The coalition formateur again received a substantial cabinet bonus. The Brazilian Democratic Party (PMDB) has also been over-allocated with positions with 6 portfolios (37 percent). This clearly illustrates Dilma’s intent to please the second largest party in Brazil’s Chamber of Deputies, the largest party in the Senate as well as the party of Dilma’s vice-president.

Table 1 compares the cabinet disparity or the difference between the intra-coalitional percentage of cabinet posts held by the party and the intra-coalitional percentage of lower legislative house seats held by the party. The only parties with positive cabinet disparities within Dilma’s coalition are PT and PMDB, with 18.95 and 12.93 respectively. Hence, these two parties received a disproportionately high percentage of cabinet posts, which do not reflect their proportional weight in Congress, 88 seats (26.99 percent) and 79 seats (24.23 percent) respectively.

However, other important parties hanging in Dilma’s coalition received cabinet seats that were worse than their share of lower-chamber legislative seats. These parties were severely under-rewarded, particularly the PP, PL/PR, PDT and PSB, which received a disproportionately low percentage of cabinet posts (-9.87, -9.87, -5.88 and -5.02 respectively). As these parties had their initial expectations dashed by receiving a disproportionately low number of cabinet seats, we should observe that they received other forms of compensation, such as a higher distribution of monetary benefits in the form of pork barrel politics and/or patronage in lower ranks of the public administration in order to keep them disciplined with the government. Otherwise, growing dissatisfaction would lead to more frequent coalition defections and consequently higher difficulties of sustaining and coordinating political support in Brazil’s Congress. 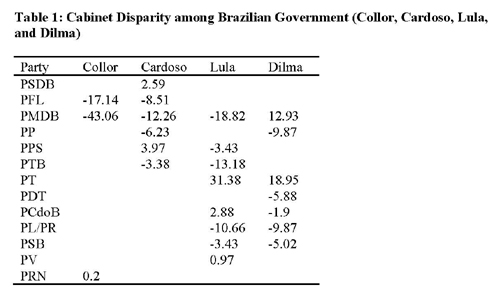 The anger vote in times of democratic fatigue

The market access negotiations [of the Trans-Pacific Partnership] have been conducted bilaterally, so there is a fair amount of bilateralism embedded in the [TPP] agreement, but then you had all the benefits of multilateralism added to that in terms of rules that apply across the board. The problem with the bilaterals is we actually have tried that approach and we found that it is extremely time-consuming. So, none of these new bilaterals being discussed in the Trump administration are going to materialize overnight. They take a lot of time to negotiate—years, probably—and they tend to generate rules that are idiosyncratic.