By the Census calendar, we are now more than one-third of the way to our next national headcount. Until then, new population estimates for the nation’s counties and metropolitan areas as of July 2013 provide some sense of this decade’s trends.

At this point, the prognosis does not look good for much of small town America (with the exceptions of a handful of energy boom towns and retiree magnets). As badly as some regions have fared during the post-recession period, the new statistics show population decline in smaller areas, increasing large metropolitan area dominance.

Additionally, the population living entirely outside metropolitan areas—nearly two-thirds of the nation’s 3100 counties—shows an actual population loss for the third year in a row. At the other end of the spectrum, the nation’s largest metropolitan areas are growing at far higher rates with only a modest growth slowdown due to a national downturn in immigration and births.

Eighty-three of these small metropolitan areas registered absolute population declines in 2012-2013, up from 69 the previous year, and just 36 in the middle of the 2000-2010 decade. During the pre-recession boom years, small areas like Dalton, GA, El Centro, CA, and Grand Junction, CO enjoyed annual growth rates exceeding 2 percent, but they are now suffering population losses Some of the current decliners, such as Charleston, WV, Saginaw, MI, and Johnstown, PA, located in the industrial interior, struggled with population losses for all of the 2000s. Yet, more than half of today’s small area decliners are new since 2010 and located more broadly across the country.

America’s non-metropolitan population has historically been subject to its own boom/bust cycles especially in places tied to specific industries like manufacturing and farming. The middle part of the last decade, before the onset of both the recession and the housing crisis, was a boom period.

However in the three years following 2010, roughly six in 10 rural counties experienced population losses compared with less than half in the mid 2000s. Back then, fully 499 non-metropolitan counties showed annual growth rates over 1 percent, compared with just 224 last year. The recession and credit crunch led to sharp declines in manufacturing-based counties, with 70 percent showing population declines since 2010. Yet beyond these, previously more resilient counties—those heavily dependent on rising consumerism or the building boom—also took substantial growth hits. 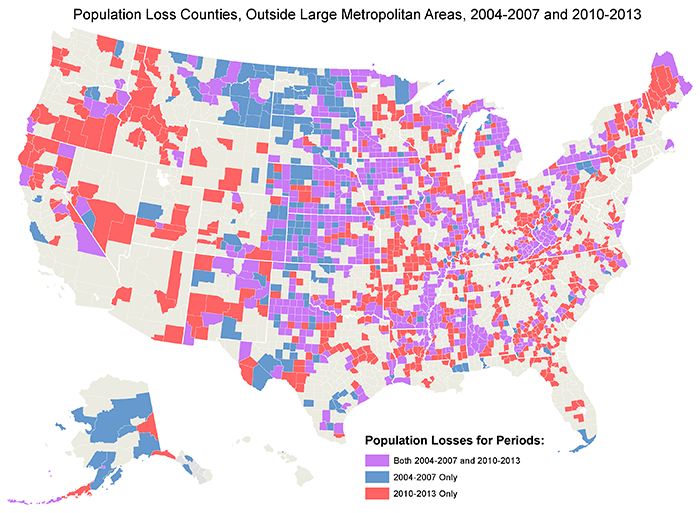 The map below contrasts two periods of losses among small metropolitan and non-metropolitan counties over the 2004-2007 boom period and from 2010 to 2013. Although a large patch of middle of the country counties lost population during both periods, the map also shows the location of newly declining counties. Many of these are typically associated with recreation in the West, upper Great Lakes, and parts of New England. Others show a spread of manufacturing-related decline concentrated in the Northeast and South. Yet, a good number of these new population decliners, in all parts of the country, are not specifically associated with deteriorating industries.

This seeming decline of small town America relative to large metropolitan areas does not mean the latter are doing uniformly well. Even during boom periods, as in the middle of the 2000-2010 decade, strong migration flows occurred between economically stagnating large metros to those on the rise. While such flows were on hold during the migration slowdown of the past several years, the new numbers suggest a modest pick-up in growth for Sun Belt metros like Houston, Denver, and Charlotte along with growth declines for areas like Pittsburgh, Scranton, and New Haven (Download Data as a spreadsheet); though the growth in the former is noticeably smaller than in the middle of last decade

So what does this portend for the rest of the decade? As job and housing markets gradually pick up, it appears that large economically vibrant metropolitan areas will begin to grow. The situation for smaller places seems less certain. Still, small town America has been counted out before, but has, in many parts of the country, found ways to reinvent itself. This may well occur again.