The nation appears to be rising back from the demographic dead, albeit slowly, according to new Census Bureau estimates for the year ending in July 2012. The nadir was in 2010-2011 when the U.S. residential population grew by a mere 0.73 percent, the lowest rate other than in wartime, since 1937. It reflected a long stretch of national economic malaise and its demographic consequences, including reduced immigration, declines in the number of births, and the lowest domestic migration levels since the end of World War II.

The new numbers provide some sense of revival, however modest, with national growth rising to 0.75 percent. While low by historic standards, this uptick is accompanied by a rise in immigration and some thawing in the near frozen movement to previously hot destinations in the Sun Belt. This, when accompanied by a recently reported rise in interstate migration, suggests that 2012 could mark the beginning of a national demographic revival, though one which may never approach the rapid growth heydays of the baby boom dominated 1950s and 1960s.

The nation’s recent uptick is nowhere near the more than 1 percent annual growth rates we achieved in the 1990s, but it stems five years of steady downturn. Rising international migration to levels not seen since the pre-recession year of 2005-2006 was the key ingredient. The 885,000 gain registered in 2011-2012 is over 100,000 greater than the previous year. While it’s still not close to the million a year gains we enjoyed earlier, the turnaround suggests renewed economic magnetism for immigrants, who contribute to both low and high skilled jobs. 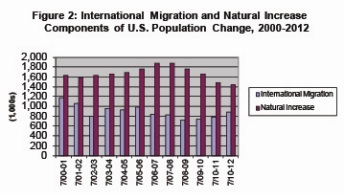 The one demographic indicator which hasn’t revived with the new numbers is natural increase, the excess of births over deaths. This decline reflects even fewer births than in 2010-2011 and more deaths. The reduction in births may represent a continued reaction to the poor economy. However, the sustained aging of our population suggests that we cannot expect anything more than modest occasional gains in natural increase over time.

The other encouraging news from the new Census Bureau numbers is a long awaited uptick in migration-directed population growth in a number of Sun Belt states which bore the brunt of the recession and housing market downturns of the past five years. The poster children of this phenomenon are Nevada, Arizona and Florida, where growth levels plummeted in the 2006 to 2011 period. But Nevada and Florida experienced small growth upticks last year, coincident with the recently observed gains in interstate migration. Florida, on the cutting edge of this revival, already showed stronger gains last year. In fact 26 states experienced faster growth in 2011-2012 than in the previous year, of which 17 were in the Sun Belt including large parts of the Southeast and Mountain West. These included some of the fastest growing states: North Dakota, Texas, Wyoming, Utah, Nevada, Colorado, and Arizona. North Dakota is riding a wave of an oil boom, but most of the other states are rebounding from sharp slowdowns in the recent past. 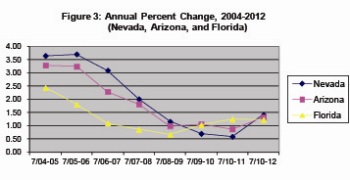 Much of this gain is related to renewed domestic migration.  For the first time in four years, Nevada registered a net in migration from other states. Arizona showed substantial migration gains, and Florida showed strong net in migration for the second straight year. Their migration gains are nowhere near peak levels of the mid 2000s (Arizona gained 133,000 in 2005-2006, compared with 34,000 in 2011-2012) but there are new, higher migration levels in 14 Sun Belt states, compared with last year. One constant is Texas. While also below its mid-decade peak, it led all states in domestic migration for the past seven years.

The new 2012 numbers suggest the beginning of a demographic turnaround, inspiring hope that 2013 may lead us back to something more normal. This, of course, depends on continued improvements in both the job and housing markets, which would lead to even greater migration flows to places that have taken a beating for the past half decade and new places that will capitalize on the rebound. Yet even with revived immigration and some uptick in births, our national growth rate is not destined to rise above 0.8 percent a year and could  eventually fall to 0.5 percent according to the Census Bureau’s recently released population projections.

As an aging society, we can expect lower levels of fertility, higher numbers of deaths, and generally slower growth. So while we are not likely to fall off the demographic cliff of population decline that appears imminent in Japan and several European countries, the recent slowdown signifies that we are approaching a future of far more modest population growth than we enjoyed in the past.